In this first of a two-part series of the 50th anniversary of the landmark federal legislation prohibiting sex discrimination, we look at the impact of Title IX on athletics

Karen Tessmer, head women’s basketball coach and associate athletic director at Worcester State University, attended high school in the late 70’s and college in the early 80’s. In high school, she played on the boys’ soccer team because there was no girl’s team, but did play on the girls basketball and softball teams “There were logistical issues,” she said. “We always had to find a different locker room and bathroom.”

Fortunately, her coaches and teammates were supportive. Tessmer’s athleticism earned her spots on the teams, and besides winning a State Championship in basketball, another highlight was scoring two goals on the boys soccer team! For the first year, she was the only girl on the team. In the second year, another girl joined the soccer team. “It never felt like I was doing something groundbreaking. I just wanted to play.”

Tessmer’s experience was not an isolated one prior to the passing of Title IX, a federal law
that prohibits discrimination on the basis of sex at any educational institution receiving federal financial aid. Across the country, universities are celebrating the 50th anniversary of the landmark legislation and its wide-reaching impact across athletics, campus-wide gender equity and the response and prevention of sexual harassment and sexual violence as forms of sex discrimination.

Widely acknowledged for “leveling the playing field” for women’s athletics, Title IX mandates equity in opportunity, access and resources devoted to men’s and women’s athletics programs. At Worcester State, there are eleven women’s teams, and nine men’s teams, however there are still more men who play sports, which does not reflect the University’ student population, 61 percent female.

Athletics Director Michael Mudd said that the University’s football team roster of 100 male players accounts for 25 percent of the total student-athlete pool for men and women.

“That fact alone makes it very difficult to be Title IX compliant,” Mudd said. “We currently offer 11 sports for women and 9 for men. In recent years we have added Women’s Golf and Women’s Ice Hockey. Women’s hockey was a significant investment by the university. We will continue to look for other opportunities to add to our women’s sports arsenal.”

In 2018, the University created a new Title IX coordinator position, held by Jennifer Quinn. In previous years, compliance with Title IX was one part of the responsibilities held by an associate dean. The office has numerous responsibilities for ensuring the University complies with both federal and state equity laws for students, faculty and staff. “We are doing a good job and are always working together to make advances in the area of Title IX and Athletics,” Quinn said.

Quinn is especially proud of the strong relationship between Athletics and her office. The University has formed a committee tasked with educating student-athletes about sexual violence. The committee implemented the NCAA Sexual Violence Prevention Toolkit and works collaboratively to provide a safe environment for student athletes. The toolkit has five areas of commitment: leadership, collaboration, compliance & accountability, education and student -athlete engagement. At Worcester State, all student athletes are required to complete online sexual violence prevention training in order to play sports.

Alumna Ann Zelesky ’73 played field hockey, volleyball, women’s basketball and softball at Worcester State. Title IX, she said, “has created an opportunity where young girls interested in competing in sports are now respected and taken seriously. It is so rewarding to see so many girls and women  reap the benefits of competing in sports in many ways such as their physical and mental health as well as academic performance, self-confidence and career and life opportunities.”

Kelly Downs, coordinator of Student Athlete Support Services and head women’s lacrosse coach, said, “Title IX has provided the opportunity for us to compete and gain the same benefits the male sports have. We as a team have been able to compete at a high level and enjoy the sport we love.”

Downs started playing sports “as soon as I could walk.” She credits her high school field hockey coach, Judy Schneider, and her college hockey and lacrosse coach, Erika Smith, with inspiring her career path. The two coaches were “a positive role model for our team, believing in ourselves in more ways than we thought we could and encouraged us to really take advantage of the opportunities we were given.”

Downs is now giving her athletes what Schneider and Smith gave her. “Seeing your athletes grow for four years, from timid first-years to extraordinary young women is the best gift you can ever get from coaching.”

One of the highlights of her time as a coach at Worcester State is when her team won the MASCAC regular season championship last year. “The 2021 team had to overcome a lot of adversity with COVID and they are now in the record books as a record breaking team,” she said. “Those are the teams you get excited to coach because, when the world has its ups and downs, they came each and every day to practice, happy to be there, gave everything they had, and were truly a family. It was remarkable to be a part of.”

Tessmer is also proud of her athletes and fellow coaches. “We’ve built a program we all can be proud of. Our kids are successful in the classroom, we have great teams, and we’re helping them be successful leaders once they leave Worcester State.”

Tessmer started her coaching career in 1985, right after completing her bachelor’s degree. As a graduate assistant coach at JMU, a D1 school, she met people who were strong advocates for women’s sports and that has continued throughout her career. “That’s how I’ve learned things along the way, I’ve had great role models and mentors,” she said. “And that’s been my role as coach to help student athletes during their college careers, especially our women athletes.”

She hopes that her athletes always understand the legacy of Title IX. “They should never lose the history of how far we’ve come, understand the opportunities Title IX brings to them, and appreciate trailblazers.”
Yet, as much as Title IX has given women college athletes, Tessmer is keenly aware that there’s more work to be done. Women’s sports still aren’t being promoted as much as men’s in the media, she points out, and it’s important to educate men as well as women on why Title IX is important.

“We have to keep the fight going,” she said. “We have to pass the torch. It doesn’t end here.”

Editor’s Note: Look for the the second of our two-part series on Title IX later this summer when we will look at the broader scope of Title IX surrounding gender equity, the LGBTQ+ community, prevention of sexual harassment and sexual violence, and how Worcester State is working to ensure a safe, equitable and inclusive campus. For more Title IX information and resources visit the University’s Title IX site.

This fall, the university will do outreach to engage students on Title IX. Students, alumni, faculty and staff are invited to reach out if you have a Title IX story you’d like to share. Please email wsu_titleix@worcester.edu

If you’d like to make a gift in support of women’s athletics at Worcester State, click here. 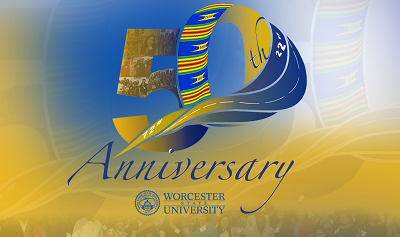 The Office of Multicultural Affairs will celebrate 50 years of impact and support for the Worcester State University community with a special event on September 24, 2022. As the planning committee works to organize this special event, it is opening nominations for a keynote speaker and an emcee for the evening. Candidates should be graduates of Worcester State with an affiliation to OMA. “We . . .