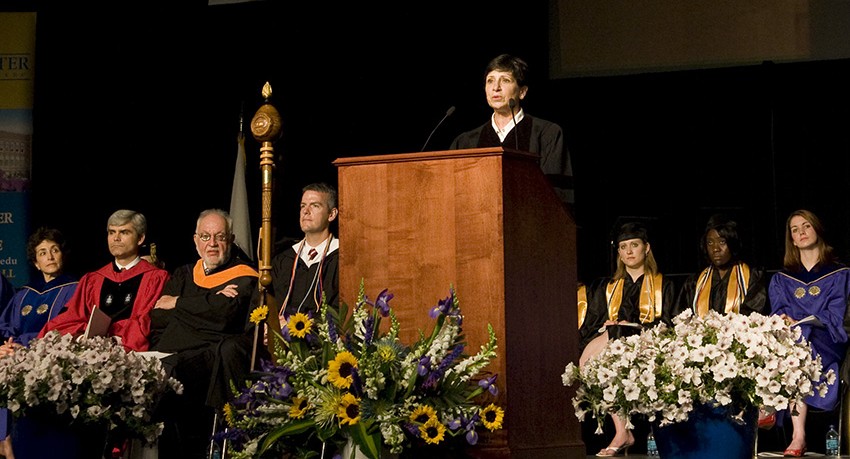 Manning’s remarks outlined her advice for managing your own “business plan.”  She drew on life lessons she learned when tragedy struck her family and she lost her son Danny to leukemia just weeks before his 21st birthday.  A WSC Occupational Therapy major, Danny died in 1994 from complications caused by his treatment for leukemia. Dottie’s dedication to preserving Danny’s memory continued even after her husband’s death of esophageal cancer at age 47 two years later.

“It was my business to comfort him, support him and give him hope,” she said, “not to control or to save him.”  It was a tough lesson for her to learn and one she wanted to pass on to the graduates. She stressed the importance of identifying those things we have control over and focusing on them.  “There are only a few things that you have control over,” she said.  “How you use your time; how you use–or misuse your body; how you spend your money; who you offer your love and friendship to.”

Manning’s address coincided with the first scholarship being awarded to an Occupational Therapy student in her son’s name.  Dottie and her late husband, Dan, founded The Dan Manning, Jr. Occupational Therapy Scholarship Fund at Worcester State College and the Our Danny Cancer Fund at the UMass Cancer Center.  Manning, whose son Richard graduated from WSC in 2006, is now the director of Our Danny Cancer Fund, a position she assumed in 2001 at the conclusion of her 13-year career as a guidance counselor at Assabet Valley Regional Vocational High School in Marlborough. Manning was awarded an Honorary Doctorate in Humane Letters as part of the commencement ceremony.

Also receiving an Honorary Doctorate in Humane Letters was Annette A. Rafferty, founder of Abby’s House. In June 2009, Abby’s House will celebrate 33 years in the Worcester community. “She has been a leader in serving the needs of homeless, abused and low-income women and children,” said President Janelle Ashley in recognizing Rafferty.

In recognition of his extraordinary leadership in philanthropy, and business, Melvin S. Cutler received the 2009 Community Service Award. “Mel Cutler serves a shining example of corporate and philanthropic excellence and has made our community a better place to work and live,” said Vice President of Institutional Advancement Thomas McNamara in recognizing Cutler.

In recognition of her exceptional teaching, scholarship, leadership, and service, Communication Professor Julie Frechette was awarded the 2009 George I. Alden Excellence in Teaching Award.

President Ashley thanked the graduates and their families for placing their trust in the college. “We take that trust very seriously and we are exceedingly proud of your accomplishments,” she said.  Board of Trustees Chair George Tetler urged graduates to, “improve the lives of those around you,” and assured them that they, “will always be a part of Worcester State College.”

Senator Harriette Chandler commended the college for its success during tough economic times. “Worcester State College was able to provide you with an excellent education during very trying times,” she said. “There is no more important responsibility for our government.”