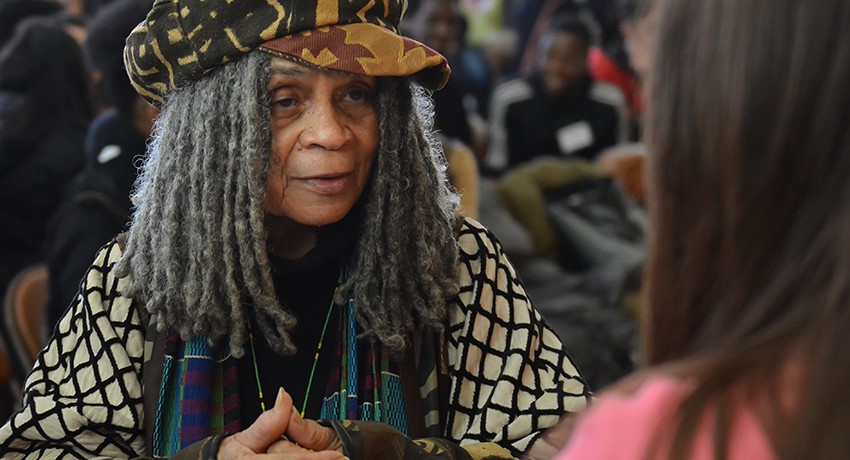 Poet Sonia Sanchez Urges Students to Search for Their Own Stories

For poet Sonia Sanchez, poetry is like music: it becomes something entirely different when translated to sound.

“What I remember about reading the first time to an audience is that I was stricken by how the words stayed on the page,” she said, “and how at the same time, I remember the language of my grandmother and my father, and jazz musicians: how that language sounds off paper.”

The language of poetry, and its godchild, hip-hop, was the focus of the lecture by Sanchez, entitled “From Black Arts to Hip Hop.” She spoke to more than 150 public high school and college students at Worcester State University at the third annual African American Read-In, a national day that promotes and celebrates African American arts and culture for young people across the United States. At WSU, the day is also part of ALANA Preview Day, where the Admissions Office provides campus tours and other information about the University to students from Worcester Public Schools.

Sanchez, a poet, activist, and teacher, played a major role in the Black Arts Movement of the 1960s and ’70s. She has published 16 books of prose and verse, and received the Robert Frost Medal, one of the nation’s highest honors to American poets.

Sanchez began her lecture by reciting the names of important African-American women and men—“people who have contributed so much, some amazing work, in this country,” she said. Notable figures included her in extensive dedication were Michael Brown and Eric Garner, Maya Angelou and Toni Morrison, Martin Luther King, Jr., and Malcolm X.

These people, including Sanchez herself, were symbols to look to in the 21st century, when African-Americans and other marginalized groups could face the possibility of disappearing as significant forces in world history, as many would want to willfully “forget” their struggles. The antidote, she said, was to continue the cycle of handing down their ideas down to the next generation, to preserve the past and innovate for the future.

“We teach your generation that there is an intersection of ideas; we pass down, to the next generation, new ideas and old ideas, and we say to you: ‘take what you need, and leave what you want.’ But you’ve got to come up with something new in return,” she said.

The poet mentioned that, in that spirit, she has worked with and mentored a number of prolific hip-hop and rap artists, including Tupac Shakur and Yasiin Bey (formerly known as Mos Def), because they “speak the same language.”

“Our generation of Black Arts poets began to show poets how to read, how to make rhythm with words,” she said, “and these hip-hop poets heard the sound and picked it up, and they did the same thing that we did with our poetry sound.”

At the request of the audience, Sanchez read the lyrics to her song, “When Ure Heart Turns Cold,” an ode to Shakur that was featured on her album “Full Moon of Sonia.”

The poet has been acquainted with Shakur’s mother, who was a member of the Black Panthers. Because Sanchez knew Shakur as a child, who she described as “one of the brightest children I have ever seen,” she was shocked when she first heard his rhymes coming through her speakers.

“My kids brought a CD home and were playing it so loud it was bouncing off the windows. I asked, ‘Who is that?’ and they said ‘Someone by the name of Tupac Shakur,’” she said. “I dropped my glass of water that I was holding.”

Hip-hop artists like Shakur, said Sanchez, have become the new poets of our generation. “These are the people who say and wrote the words that made us understand the power of language.”

She encouraged the audience to search for their own story and, in the process, they would find the stories of others, as she had. The power of poetry and verse could give them the strength to overcome the harshest of environments and situations, much like the rappers and hip-hop artists who have become icons in their own right.

“You have to survive. You have to shake out your turf, learn how to be around people who will help you survive, to understand…the point, that it is incumbent upon you to survive, and to resist,” she said.

The Multicultural Affairs Office was lead organizer for the lecture, which was co-sponsored by the Admission Office, English Department, Third World Alliance, Worcester Public Schools, Massachusetts Education and Career Opportunities Inc., and Gear Up. 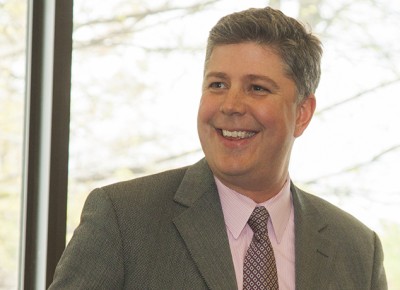 One year after announcing his Five Points of Action Toward a More Inclusive Campus Climate, Worcester State University President Barry Maloney devoted some of his mid-year employee meeting to . . .