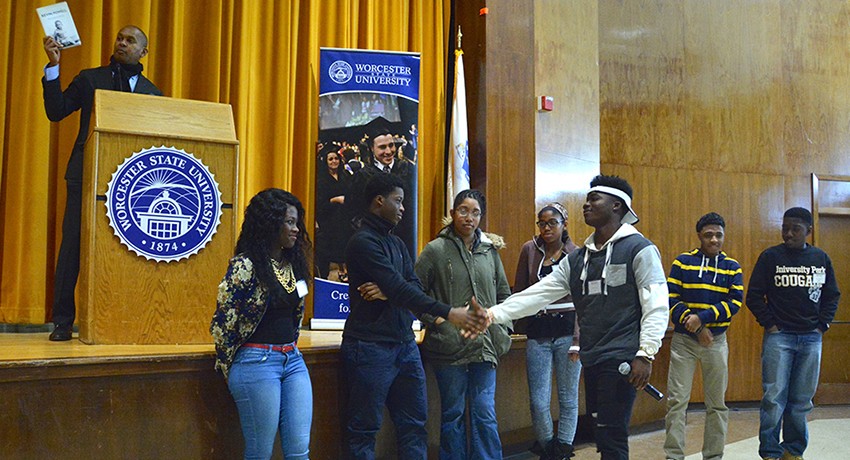 Before beginning his lecture, author and activist Kevin Powell encouraged the standing-room-only crowd that included visiting Worcester public high school students and Worcester State University students, to get up, stretch, and to state aloud: “I am a genius!”

The students were only too happy to comply.

Powell recently visited Worcester State to celebrate National African-American Read-In Day with the university, as well as with prospective college applicants from the Worcester Public Schools’ “Talent Search” programs, which help students navigate the college-application process. In many cases, the students participating are the first in their family to attend college, low income, and/or an ALANA (African American, Latin American, Asian and Native American) student.

Powell is regarded as one of the most acclaimed political, cultural, literary, and hip-hop voices in America today. A native of Jersey City, he was raised by a single mother in extreme poverty, but managed to study at Rutgers University and has gone on to become a successful author and activist who has appeared on television, radio, and a wide variety of print and web publications.

His most recent book, The Education of Kevin Powell: A Boy’s Journey into Manhood, is a critically acclaimed and brutally honest memoir about his life.

“This was the hardest thing I have ever written in my life, even more so than my previous eleven books,” said Powell, because he had to revisit memories of growing up without the presence of a father and a mother who struggled to make ends meet.

Powell credits his rise to success and later accomplishments to the strong support from his mother, who encouraged him to read at an early age. He referred to her as his “first teacher and leader that he ever met.” Although she only had an 8th grade education, Powell said that she pushed him to achieve academic success and was determined that he would go to college despite their circumstances.

“You do not allow the circumstances of your life to stop you from opportunities and possibilities,” said Powell.

He stressed the importance that reading had on his life. “What I got from reading was an imagination, that I got from spending time from library,” a place he frequented with his mother. “Reading opens up your mind and your imagination. It made me realize that there were things possible out there that I didn’t see before.”

When some students in the audience explained why they didn’t like reading, Powell suggested that they should find things that they are actually interested in. “Start there,” he said. “For example, the first books I started reading were not Shakespeare or poetry – they were sports books, because I loved sports like baseball and football.”

“Reading is the great equalizer; reading is fundamental because it also teaches you, if you are open to it, who you are, and where you come from,” said Powell. “If you don’t eat, you die. And if you don’t read, your mind drifts. It’s essential.”

Powell offered to hold classroom Skype sessions with the students to discuss his autobiography if their teachers were interested.

“Usually, it’s 30,000 dollars for only one year of school,” Powell remarked. “I hope some of you [high school students] take advantage of that. These folks are looking out for you.”

This event was sponsored by the Office of Multicultural Affairs, Third World Alliance, English department, Sociology Department, and the Admissions Office. It was supported by a faculty mini-grant awarded to English Professor Charles Cullum.

About the photo: Powell answers questions from some Worcester public high school students at the conclusion of his lecture.

President Barry M. Maloney has developed five initial "Points of Action" that will help the campus meet two of five overarching goals of its strategic plan – to cultivate a vibrant and . . .