President Barry M. Maloney has developed five initial “Points of Action” that will help the campus meet two of five overarching goals of its strategic plan – to cultivate a vibrant and collaborative campus, and to enroll and retain diverse and motivated students – and to carry out the strategic imperative that all members of the WSU community will feel included and valued. The points were presented at a recent faculty and staff all-campus meeting.

President Maloney encouraged all faculty and staff to take advantage of campus events that foster cross-racial interaction and mentioned several events associated with Black History Month. He especially encouraged participation in a visit to campus from Dr. Cornel West (whose lecture date has changed since the initial announcement), which will take place on March 30, 2016, at 10:30 a.m. in the May Street Building.

According to President Maloney, Worcester State has also undertaken several successful recruitment initiatives aimed at keeping a full pipeline of applications coming in an increasingly competitive environment. He applauded the Admissions staff and others for their work on the $30K Commitment initiative, aimed at providing a cost-specific pathway to a bachelor’s degree via regional community colleges. In an effort to motivate students to persist and graduate, the university has focused on retention, and implemented initiatives aimed at improving the rate for under-represented groups. Such efforts must continue, he said.

“I expect every one of us to contribute to our students’ success, and to join me in making Worcester State the most inclusive and welcoming campus in Massachusetts,” he said. 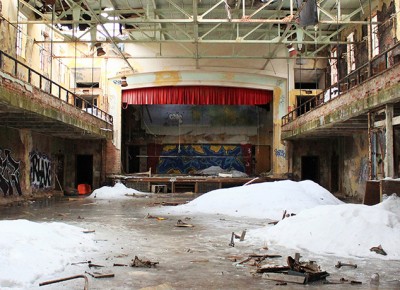 What began as a whim to take haunting pictures of an old asylum in New York has turned into two friends’ passion to document a seamy era in the care of the mentally ill and disabled. In doing so, . . .