Worcester State University President Barry Maloney is among Massachusetts college and university leaders speaking out against hate groups after a counter-protester’s death in Charlottesville that was followed a week later by a massive and largely peaceful demonstration in Boston.

The Monday following the Aug. 12 hate incidents at the University of Virginia and in its host city, President Maloney tweeted from his Twitter account (@WSUPres): “I think of @WorcesterState alumna, holocaust survivor Thea Aschkenase & speak out against white supremacy groups” and “#Charlottesville We must educate, know history, promote inclusion not hate. #NeverForget #Charlottesville.”

During that same week, the 15 Massachusetts Community College presidents signed a statement and UMass President Marty Meehan offered a statement on his Facebook account, as did many Chancellors in the UMass system.

Following the August 19 march and rally in Boston, Maloney sent an email to campus, saying that the University’s collaboratively developed strategic plan asserts core values of “diversity and inclusiveness” and “civility and integrity.”

Maloney over the past two years has promoted his vision for WSU as one of the most diverse and welcoming campuses in Massachusetts. The University has strived in recent years to hire faculty and staff who reflect the diverse backgrounds of students in order to provide the proper learning environment, as well as to engage in trainings, revamp hiring processes, and expand speaker series to ensure that the campus community learns from those with different backgrounds and opinions.

“I truly believe the longstanding role of academia – to educate – is more important now than it has been in decades,” said the president in his statement. “All of our students must learn about the history of genocides, mass slaughters, and domestic and foreign terrorism, as well as what their precursors are.”

He added, “We also must teach about the differences between fact, fiction, and propaganda, particularly in an age when those lines have been blurred by the grassroots nature of the mass media and by leaders deliberately blurring those lines for political or violent ends. We must stand ready to provide voices of reason whenever voices of hate arise.” 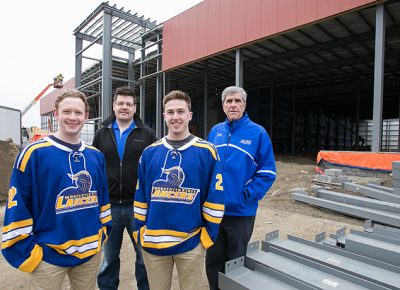 New Home for Men’s Ice Hockey Is a Game-Changer

For John Coughlin, associate head coach of Worcester State’s men’s hockey team, it was the missing link—or rather, rink—he needed to sell a top-level hockey program. After recruiting trips, . . .