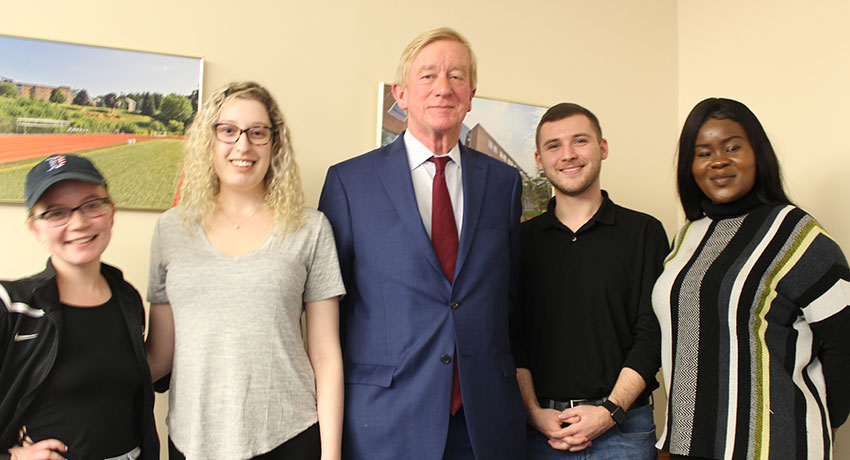 It’s a political debate just about everyone would tune in for: William F. Weld, former two-term governor of Massachusetts and current Republican candidate for president, and Saturday Night Live’s popular impersonator of President Trump. Weld visited Worcester State University on Tuesday, Feb. 25, as part of a campaign swing through the state and noted that he’s not likely to get a chance to appear on the debate stage with President Trump, who has made it clear he’s not going to debate anyone.

“I have a better chance of debating Alec Baldwin,” he said. That was one of several lighter moments in a stump speech he gave in the Student Center Blue Lounge in which he outlined why he is challenging President Trump in the Republican primary.

Afterward, he met with student leaders informally in the Foster Room where he was peppered with insightful questions ranging from his views on climate change (he wants decisive action) to our relationship with Israel (he’s a two-state guy). The event was presented by the History and Political Science Department and the Hon. John J. Binienda Center for Student Engagement.

“You can feel when students are engaged and learning and I thought, in both settings, they were listening,” Mark Wagner, Ph.D., the Binienda Center director, said at the close of the event. “It also was really a great outlet for some of our Republican students to ask questions.”

In an election season where the focus has been on a very active Democratic primary, students said they found it interesting to hear more about the Republican perspective. “Even though the Republican party in 2020 isn’t receiving a whole lot of attention, I still think it’s just so fascinating,” Eric Miller ’22 said. “I think both parties deserve their due respect and attention right now.”

“I think it’s very important to stay up to date on politics and know what’s going on, so I thought it was a great opportunity to learn more,” Karen Shalev ’22 said. “And I love forums like this where you get to sit down and really talk about what’s important to you.”

Weld was elected governor in 1990, before the students in the audience were born, and was reelected in 1994 with 71 percent of the vote. He was the first Republican to be elected governor of Massachusetts in 20 years. He is running for president on issues of fiscal conservatism, honesty, and transparency. He also champions individual freedom, an outlook that led him to run as vice president on the Libertarian ticket in 2016.

Prior to being elected governor, Weld served in President Ronald Reagan’s Justice Department, first as the U.S. attorney for Massachusetts and later as assistant attorney general. Earlier in his career as a staff member on the U.S. House Judiciary Committee, he participated in the Watergate impeachment inquiry.

Weld is the only Republican challenger to President Trump, although he is considered a long-shot candidate. He seems quite aware that his chances are slim but said he wants to at least get voters, especially the many who appear to have a blind allegiance to President Trump, to begin to question some of his policies.

Weld said he views himself as an alternative to Donald Trump’s novel brand of Republicanism.  He said there are many things he would like to do in Washington that are not now being done there.

“One thing I would like to do is to end the trillion-dollar annual deficits,” he said. “I was known in office as something of a fiscal conservative, in fact very conservative. . . in a state which, until I got here, was known as Taxachusetts.”

He also pointed out that he has a long history of environmental enforcement which included the Boston Harbor cleanup when he was U.S. attorney for Massachusetts and enacting the Rivers Protection Act while governor.

“I’m very troubled by the fact that the president says that the risk of climate change from the melting of the polar ice cap is, in his word, and it’s only one word, a ‘hoax,’” said Weld, who often used a tongue-in-cheek approach when referring to the president. “So, he’s putting his own superior expertise up against 2,000 scientists who pretty well concluded that it’s a substantial risk. And if we don’t do anything about the increase in temperature of the Earth’s atmosphere, the polar ice cap is going to melt in the middle of this century.”

Weld noted that the Clean Water Act and the Clean Air Act were Republican initiatives and that Republican Teddy Roosevelt started the National Park System. The Trump administration is systematically gutting those protections, he said.

“The best traditions of the Republican party are consistent with environmental protection and enforcement,” he said. “But Mr. Trump doesn’t like this. I guess it’s his attempt to be politically incorrect and he succeeded beyond his wildest dreams because recently his most recent environmental measure is to make it easier for methane to get into the atmosphere out of landfills and other sources.”

“It makes them feel part of the process and that they’re being heard,” he said. “Being able to have this intimate setting and access to somebody who’s running for president, I think for them it’s sort of a rock star moment.”

Weld also answered many questions of particular interest to Worcester State students, including queries about public school teacher certification requirements, teacher salaries, and the federal student loan forgiveness program. The students’ questions “expanded my consciousness. They were brilliant,” he said at the close of the event. He instructed his aide to research the issues more closely for future use in his campaign.

Anthony Dell’Aera, Ph.D., assistant professor of political science, said the event gave students an up close and personal look at the 2020 presidential election and, more importantly, an opportunity to interact with and influence the only Republican candidate challenging a sitting U.S. president.

“Presidential candidates can often seem distant and inaccessible to most people, something to be seen on television and online without any interaction,” he said. “But on this day at Worcester State, students were able to experience that in presidential politics it can be a small world after all.” 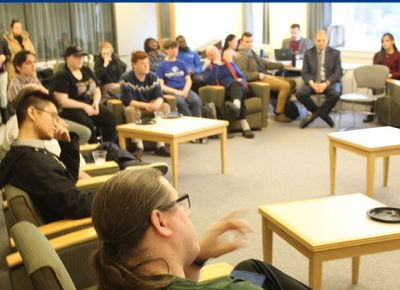 Are you Klobucurious about a Minnesota senator’s recent rise in the polls? Do you think Bernie Sanders is the Democratic Party’s best hope? Or its worst nightmare? Is there another candidate you . . .