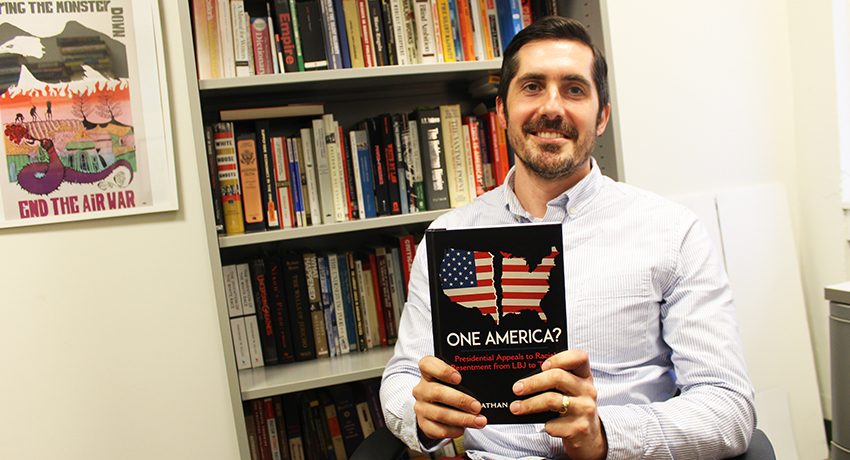 Presidential Messages on Race are Coded to Appeal to Voters, Says Angelo

While it may not seem that U.S. presidents speak about race very often, research by Nathan Angelo, Ph.D., assistant professor in the History/Political Science Department, finds that, actually, they do. But these messages are often coded in a way that resonates with certain groups of voters, usually white, that presidents hope to win over.

In a new book, One America? Presidential Appeals to Racial Resentment from LBJ to Trump (State University of New York Press), Angelo writes about his research into presidents from Lyndon Johnson through Barack Obama, with an epilogue on Donald Trump. He looks at how presidents have spoken about race and ethnicity and how they use rhetoric that attempts to attract many racial and ethnic groups, but ultimately directs itself to an archetypal white, Middle-American swing voter.

Angelo will host a book launch at 4 p.m. on Tuesday, Nov. 19, in the faculty lounge in the Sullivan Academic Center. The campus community is invited to attend.

As the SUNY Press summary of the book notes: “Despite major advancements in civil rights in the United States since the 1960s, racial inequality continues to persist in American society. While it may appear that presidents do not address the topic of race, it lurks in the background of presidential political speech across a range of issues, including welfare, crime, and American identity.”

“Whenever they spoke about race directly, they said very little,” Angelo says. “It was usually to say, ‘People of all races, we’re all American’—that kind of thing. They like to talk about that as being American identity, yet they would talk about American identity the next breath in a way that was often coded.”

In effect, they were saying programs that many voters incorrectly perceive as being primarily used to help minority groups do not have the characteristics of what it means to be American, according to Angelo. “And, therefore, what it means to be American has sort of been, in presidential speech, associated with resentment of African Americans and resentment of minority groups,” he says.

Even as a person of color, President Obama also employed coded language at least in part because he was caught between the norms dictated by the demands of the office and his own identity, Angelo says. An example was when he spoke of the father of First Lady Michelle Obama. “He often spoke about Michelle’s father being a hard worker and being very moral and going to church. So, he spoke against [coded racial stereotypes] a lot by using this rhetoric.”

Johnson, the president responsible for pushing the Civil Rights Act of 1964 through Congress, used coded language to convince people to support the measure.

“Johnson had to strategize,” Angelo says. “How was he going to get the Civil Rights Act passed? About 13 percent of the population was African American. He’s not going to win by talking just to African Americans. He needs support from white folks as well. So, he needs to frame civil rights as being something that’s good for everybody, basically pointing out that, on one side you have these radical civil rights activists and then you have the racists over on the other side, but we’re the people in the middle.  Johnson would tell his supporters ‘We’re the virtuous ones. This is the good thing, the human thing to do.’”

It is questionable whether there is any long-term viability to using coded language aimed at white voters, according to Angelo. “As the country diversifies, is it strategically wise to continue to point your rhetoric at a group that won’t have the majority in a few years?”

Angelo also warns that, while such tactics may allow presidents to craft winning coalitions, their use continues to lend legitimacy to a system that ignores racial inequality. But, coded or overt, racial language has been an important part of the presidential lexicon, Angelo’s research shows.  “We don’t really think about the presidency as being an institution that makes consistent comments about race, but they said so much that I was able to write a chapter on each president,” he says. 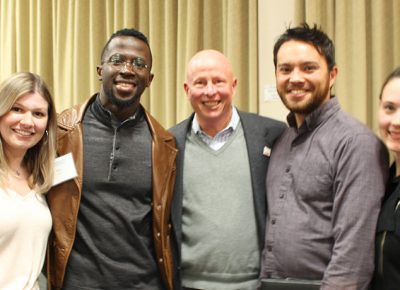 Students Honored for Setting “A Shining Example” of Community Service

The involvement of many Worcester State students in community service projects took center stage at the 9th annual Celebration of Civic Engagement on Wednesday, Nov. 6. The event, presented by the John J. Binienda Center for Civic Engagement, highlighted the many impactful projects student volunteers have led or participated in over the preceding year. The program included presentations by two . . .