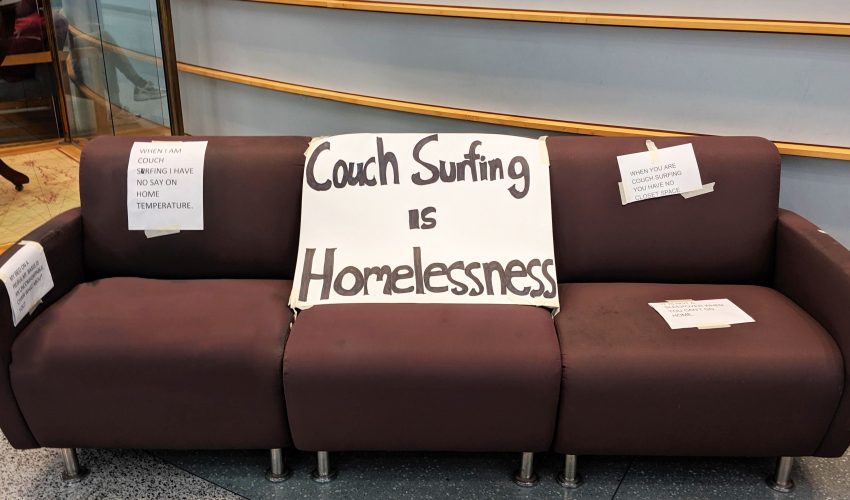 Putting a Spotlight on Student Hunger and Homelessness

Student hunger is more than a matter of not having enough money for food. Often, students are sacrificing not just meals, but also housing in order to pay their tuition bill.

Less commonly depicted is the kind of student Gauvin encounters on a regular basis. “People don’t generally think of the student who is driven, dedicated, who’s out there trying to get their degree—get that one thing that’s actually going to better their life,” she says. “And they are willing to give up food, and in some cases, shelter for that.”

According to data presented by Dr. Adam Saltsman, Urban Action Institute (UAI) executive director and assistant professor of urban studies, one in three Worcester State students is dealing with food insecurity. These figures have fueled an already robust examination of student hunger, why it exists, and what Worcester State—as an institution and a community—can do about it. Part of that examination includes continuing the work of the Hunger Outreach Team and collaborating with other local colleges and Universities to promote hunger awareness and provide resources to students in need.

In February 2019, the UAI and its campus partners, student affairs, Enactus, Urban Studies Club, and a group of dedicated students opened Thea’s Pantry, an on-campus food pantry available to any person with a OneCard; and this fall they launched the first Swipe it Forward campaign, which allows students to donate meal swipes to students in need. The team was allotted 300 meals and met that goal within two days of launching the initiative.

In September, the Hunger Outreach Team, in partnership with the Worcester Food Policy Council, Quinsigamond Community College, and other area colleges, hosted a rally entitled “No College Student Should Face Hunger.” The purpose of the rally was to heighten awareness surrounding college student hunger and bring into focus the theory that hunger cannot be addressed without first addressing homelessness.

“Living in your car, living in a tent—that’s homelessness,” says Gauvin. Even something as simple as sleeping on friends’ couches has serious implications behind it. “People who are couch surfing don’t always see themselves as homeless. This is the reality of the situation.”

The rally’s organizers illustrated this point by setting up tents and couches in the lobby of the Ghosh Science and Technology Center. Phrases designed to increase the impact of the display accompanied each item and included quotes such as “It’s not a sleepover when you can’t go home” and “I am vulnerable to street harm.”

The speaking portion of the rally, which was attended by local politicians as well as officials from area colleges and universities, featured hunger activists from Worcester State, Quinsigamond Community College, the Coalition for a Healthy Greater Worcester, and the University of Massachusetts Prevention Research Center. The speakers shared their thoughts and experiences dealing with hunger and homelessness, each one reiterating that hunger is a multifaceted issue that requires an equally multifaceted approach.

“In the midst of serving 500 students per year, we discovered that they need other things,” said speaker Charles Ketter, manager of the QCC Food Pantry and Resource Center. “Housing comes up. Banking comes up. Emotional support comes up. Intimate partner violence comes up.”

Ketter shared his own experience with food insecurity as a QCC student, explaining to the audience that prior to graduating, he limited himself to one meal a day for nearly three months in order to pay his tuition. “During that time my marks went down, my attention went down, my relationships went down, my health went down,” explained Ketter. After learning about and utilizing the food pantry, however, Ketter’s grades improved and in 2019 he graduated from QCC with honors.

Ketter went on to explain that the reason he didn’t seek help earlier was not due to lack of knowledge, but because he was too embarrassed to ask for help. This sentiment was echoed by Worcester State student Serena Jaskolka, member of the Hunger Outreach Team and Thea’s Pantry volunteer. “Stigma is such a huge problem around this issue, and for those who have experienced hunger, speaking up about it can really help us break down the stigma,” Jaskolka said.

Jaskolka ended her time at the mic by specifically addressing and acknowledging the students in the room: “I know it feels sometimes like these factors are out of our control. You’re thinking ‘college is expensive, food is expensive, what am I supposed to do? Nobody really cares about my internal struggle.’ But these factors are in our control, so if we just speak up about them and come together, we can make a difference.”

Members of the Hunger Outreach Team will continue their advocacy on Thursday, Nov. 7, with their annual Empty Bowls fundraiser. The event takes place from 11 a.m. until 2 p.m. in the Blue Lounge, located on the first floor of the Student Center. 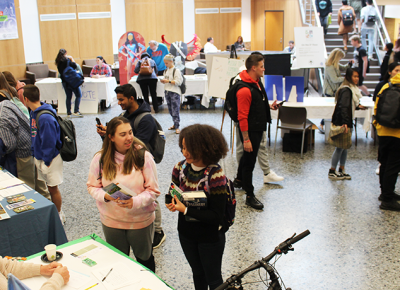 The annual Sustainability and Food Day Fair has become a much-anticipated fall tradition at Worcester State but this year, beneath the fun and festivities, there was an undercurrent of urgency. The . . .