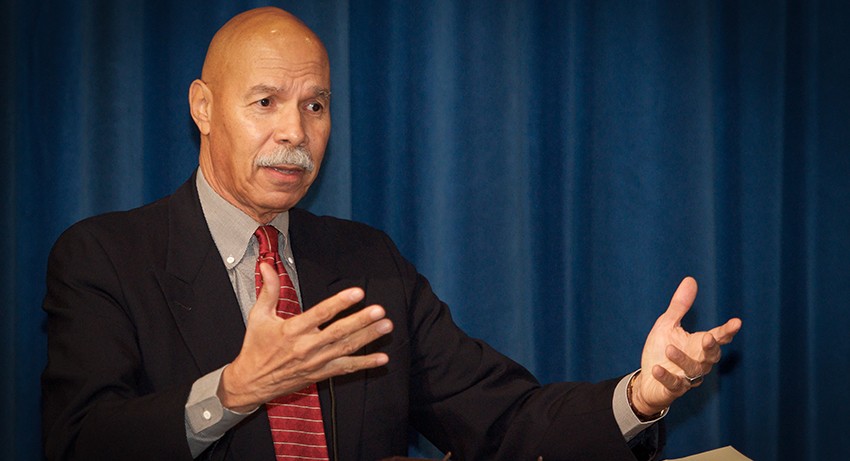 Randall Robinson, founder and president of TransAfrica, law professor at Penn State University, best-selling author, and social justice advocate, urged his audience to renew their commitment to their democratic role of citizens and become more informed about the world around them. Robinson spoke at the fourth annual Courageous Conversations lecture in the Sullivan Auditorium on Wednesday, March 9.

“I want to talk about democracy and our responsibility and our role in it,” Robinson said. “In a democracy, the citizenry has to be enlightened. One has to know those things for which and those things against which one is voting, which means that we all must be informed. This is not easy to do in the United States. We think we have entire information about the world in which we live. It’s incredibly difficult to know the things you have not been told.”

He gave Egypt, Tunisia, Libya, and the founding of the American southwest as examples.

Robinson would like to see “multicultural education from kindergarten on so that we understand something about the world.” This would ensure that we know something about people in countries the U.S. is involved in and who believe the U.S. has caused trouble for their country as well as help us know more about our own nation, he explained.

Part of his talk focused on the recent history of Haiti — his involvement in the “abduction of President Aristide” and his wife, a Haitian American, and the United States” current attempt to block Aristide’s return to Haiti. “You have got to know what is being done in our name,” he said, repeating that it’s hard for Americans to do. As an example, he said that no major U.S. news outlet has mentioned anything about the Aristide situation other than that he fled to South Africa.

Americans have a “lack of familiarity and understanding of” so many societies and what they contributed to world culture,” Robinson said. “Leading among them is the extraordinarily artistic culture of Haiti. I don’t think there is any peoples on the face of the earth who are more tenacious about keeping their culture than the people of Haiti.”

Robinson closed by saying that he is afraid the U.S. has become a “very mean political society” and our main source of information, mainstream media, “has become corporatized.”

“Question everything,” he said, and “always, always verify.” 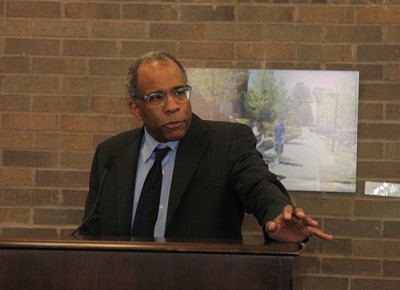