Beaton, who was appointed in 2014 to oversee the commonwealth’s natural resource and energy regulatory agencies, touted Baker’s energy bill, signed into law in August 2016, which seeks to balance three competing factors: The region’s high cost of energy—the highest in the nation; aggressive greenhouse gas reduction targets; and the retirement of large-scale energy generators such as the Brayton Point Station and Pilgrim Nuclear Power Station.

“There is no silver bullet. There’s no one answer or easy way to get there. It’s more a combination of things,” said Beaton.

Baker’s energy bill focuses on energy storage at its root, but also encourages continued leadership in energy efficiency policies and generation from renewable sources, such as solar, off-shore wind, and hydroelectric.

To address the effects of climate change in the commonwealth, Beaton created a new post, the assistant secretary of climate change, to focus on programs related to adaptation and resiliency. But he emphasized this work is being coordinated across state departments, with transportation and emergency planning leaders and local community members playing an important part in creating a statewide action plan.

Money for investment in this action plan will come from the $1.4 billion environment bond bill that Governor Baker filed recently to convert his Executive Order 569 into law.

“We’re planning the work, and then we’ll work the plan with the environmental bond bill,” he said, adding that the statewide action plan will help determine priorities. “We want communities to tell us what they need.” 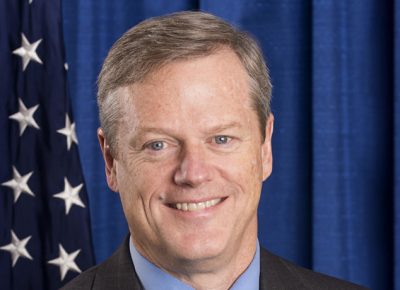 Governor Charlie Baker Among Those Speaking at May 19th Commencement

Worcester State University will hold its undergraduate commencement ceremony on Saturday, May 19, 2018, at 10 a.m. at the DCU Center in Worcester. More than 1100 students will be eligible to . . .