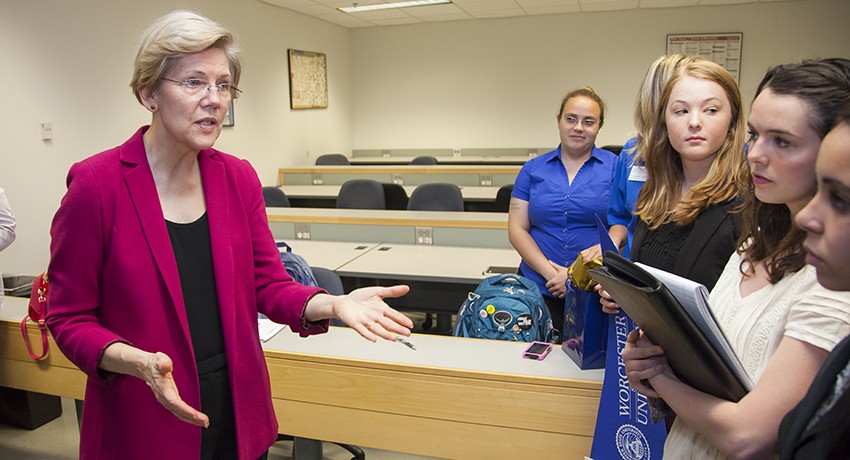 “The basic thread of my story is America’s story,” said U.S. Senator Elizabeth Warren before a standing-room-only crowd at Worcester State University’s Ghosh Science and Technology Center about her new book, A Fighting Chance, and the current financial issues facing college students and the American middle class.

A Fighting Chance, which was released on April 25, is Warren’s tenth book, and focuses on the struggles of her middle-class upbringing and her journey in becoming a consumer advocate and U.S. Senator.

When Warren was 12 years old, her father suffered a heart attack and her family struggled to make ends meet. “The bills piled up, we lost the family station wagon, and we had our toes right on the edge of losing our home,” she recalled. But with the help of her mother’s minimum wage income and low cost of public universities, Warren and her family were safe from poverty.

Senator Warren began by sharing a humorous anecdote from her book about her disastrous experience with a toaster oven fire. Back then, she explained, toasters did not have timer mechanisms, until someone finally implemented them years later and toaster fire incidents decreased dramatically.

By 2009, Warren had two goals that she was pursuing in Washington: to fight the banking institutions over the TARP bailout, and to establish a consumer protection agency. The big banks were furious with her efforts and fought to “kill” any of Warren’s proposals, but against all odds, Warren was able to establish the Consumer Financial Protection Bureau.

“That little agency has only been around and operational for a couple of years,” Warren noted, “and yet, it has already forced the biggest financial institutions in this country to return more than three billion dollars to consumers whom they cheated.”

As she learned from this experience, the balance of power in Washington was dangerously tilted toward those who could afford representation in D.C. “Here’s how I see it,” said Warren. “Washington works for those who can hire an army of lobbyists and an army of lawyers. Everybody else? Not so much.”

When asked if student loans would be the next great debt crisis, Warren responded by saying that student loans were, in fact, the current debt crisis. Student debt, explained Warren, was threatening the recovery from the Great Recession, and young people were unable open small businesses, credit cards, or own homes and cars because of their financial situations. By increasing the interest rates on undergraduate and graduate student loans, the government generates tens of billions of dollars in revenue.

“The United States government should not be making a profit off the backs of our kids,” said Warren.

The senator concluded by promising to continue her fight for the middle class and to help resolve the student loan crisis. “We can whine about this, we can whimper about this, or we can fight back. Me? I choose to fight back,” she said. 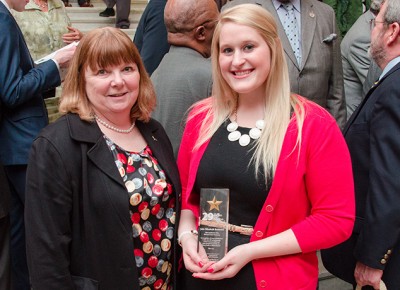 Worcester State University, the Board Chairman and Commissioner of the Massachusetts Department of Higher Education and legislators honored Whitinsville resident and student entrepreneur Julie . . .