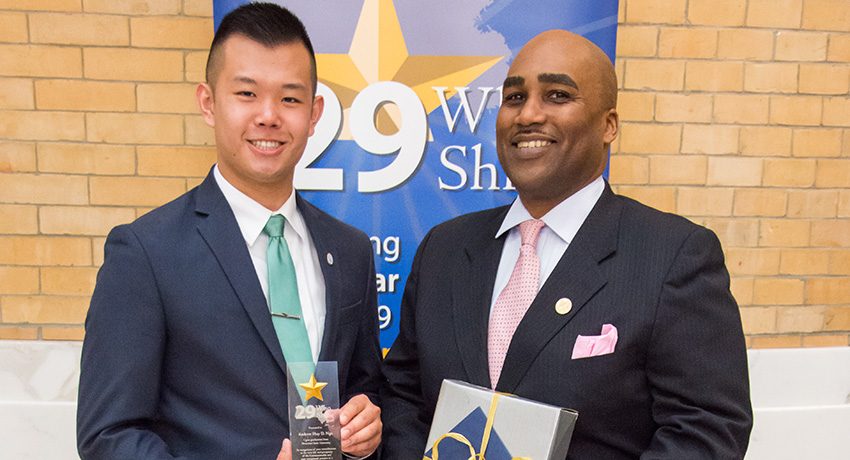 Graduating senior Andrew Huy Ngo of Worcester will represent Worcester State University as one of Massachusetts’ “29 Who Shine” during a ceremony Friday, May 5 at the State House, honoring one outstanding graduate from each of the commonwealth’s public higher education institutions.

Ngo is a high-achieving student with recognized leadership skills who is also committed to helping others. He works at the University’s Student Center after regular business hours, where he has maintained a safe and welcoming environment so that students can relax and enjoy leisure time.

He was selected for Harvard Business School’s Summer Venture in Management Program, a highly selective training for future business leaders, and served as an Upward Bound Peer Mentor, where he provided leadership and guidance to high school students participating in Upward Bound. Ngo has empowered those students to advocate for themselves by teaching them to be effective problem solvers and critical thinkers, as well as mentally prepared for college. Ngo also volunteered in small villages with high poverty in Managua, Nicaragua, and taught English to children and adults there as a first step toward a brighter future.

Those who nominated Ngo for the 29 Who Shine award (Dean of the School of Education, Health, and Natural Sciences Linda Larrivee, Ph.D.; Director of Multicultural Affairs Marcela Uribe-Jennings; and Jason Grant of the Sociology Department) said: “Huy is an ALANA [African, Latino, Asian, Native American] commuter student from an urban public high school and a first-generation college student with both of his parents born outside of the United States. What many may see as obstacles, he never let slow his path to fully immersing himself in Worcester State University…He is the consummate professional and mature beyond his years. He will leave a mark in the greater community as an alumnus of Worcester State University.”

Grant, whom Ngo identified as his mentor, also will be recognized at the State House event.

“Andrew Huy Ngo has made good on Massachusetts taxpayers’ investment in his education,” Massachusetts Commissioner of Higher Education Carlos E. Santiago said. “Every year the 29 Who Shine remind us that our public college and university graduates represent the future of the Commonwealth. They are here to learn, here to stay, and it is incredibly inspiring to see how each honoree is contributing to our common good.” 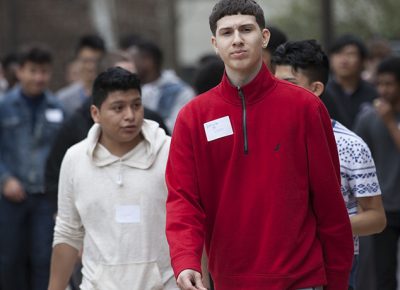 Education Officials Kick Off 100 Males to College Program at WSU

About 75 young men in high school gathered on Worcester State University’s campus Thursday, April 27 for a campus tour, relationship-building activities, food, a motivational speaker, and more as part of an orientation to Worcester’s 100 Males to College program, which aims to better prepare young men for post-secondary education. A few dignitaries also cheered on the students, encouraging . . .