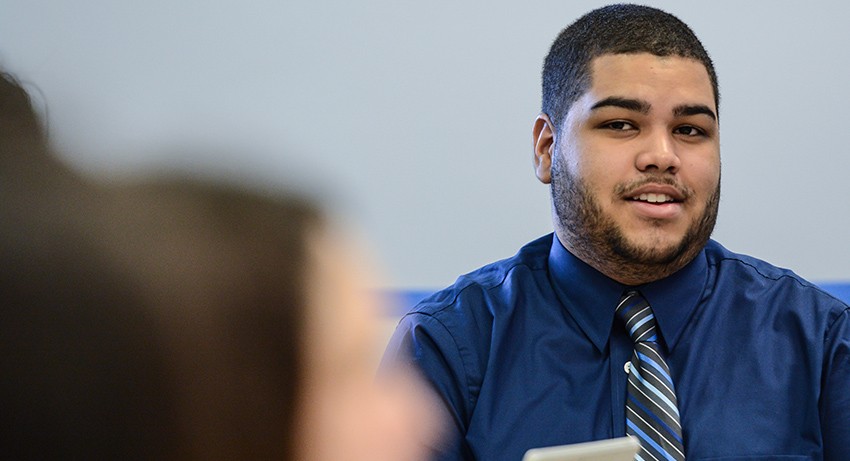 As Francisco Crisostomo walks around Lancer Landing, he stops to listen to members of Third World Alliance as they talk about issues and events. It’s his way of being a hands-on leader as the organization’s president.

And it’s how TWA’s meetings unfold every Tuesday during the fall and spring semesters.

There are many moving parts to leading TWA, one of Worcester State’s most active student groups. Part of its high visibility stems from its involvement in bringing guest speakers to campus—either as a leading or supplemental sponsor—and hosting film screenings and events like Stand Against Racism. Less visible is its work on issues that concern members.

“We’re hoping to expand the content that’s available to students, faculty, and staff so they can be more knowledgeable about what’s going on across the nation and here on campus,” Crisostomo says.

The student organization is unique “not just to Worcester State, but also Worcester and other colleges,” Crisostomo says. “You always see ASOs (African Student Organizations), BSUs (Black Student Unions), ASAs (Asian Student Associations), and LASOs (Latin American Student Organizations). But TWA brings all different groups together and brings everyone’s qualities to the top. We create harmony and bring out the best in all of us.”

TWA started off as Worcester State’s Black Student Union in the 1960s, he says. It wasn’t long before members noticed the campus’ diversity was growing to also include Latinos, Asians, and more. “As more ethnic groups came, they started to change so there would be a group for ALANA (African, Latino, Asian, and Native American) students,” he says. It officially became Third World Alliance during the 1977-78 academic year.

The organization’s name arose out of an interest to turn a negative connotation of third world into something positive. “During the Cold War, the United States and its allies used to be called first world, the Soviet Union and its allies second world, and the countries they colonized third world,” Crisostomo says.

Today, the organization also emphasizes the word alliance in its name. In addition to working with other areas of campus, TWA welcomes all students as members—even if “they’re not individuals of color,” Crisostomo says. “They may not see that TWA is for them. But if they have an interest, there are ways for them to contribute.”

For Crisostomo, his roots are in the Dominican Republic. He moved to the United States in 2006, first living in New York City before his family settled in Worcester when he was in high school.

While in high school, Crisostomo participated in an internship with an occupational therapist. He credits that experience for inspiring him to pursue a career in the field.

Because his interest lies in the mental health aspects of occupational therapy, he has structured his studies at WSU and his work for the Multicultural Wellness Center in downtown Worcester to give him a strong foundation in this area. He’s double majoring in psychology and Spanish at WSU. At the wellness center, he’s responsible for therapeutic mentoring as well as training and support for its child and adolescent clients.

After commencement in May, Crisostomo says he plans to keep his job at the center. Then after two years of full-time work experience, he plans to go to graduate school to earn a master’s degree in occupational therapy.

His mentoring, training, and support skills lend themselves well to leading TWA. At meetings, “I walk from committee to committee to see if they need my help and answer any questions,” he says. “I try to give space for the committee chairs to be creative in their own way.”

Crisostomo, who joined TWA his freshman year, also “gives space for our members to talk about what is happening in their lives and on campus. One thing TWA is known for is if something doesn’t feel just, we say something. We want there to be equality and justice.”

TWA currently is voicing its concern about changes to its office space, as well as that of the Multicultural Affairs Office, in the recent Student Center renovation project, whereby student organization space was determined based on student input. “For TWA, it was a safe haven for our members and any student of color to go talk about civil rights and race issues going on around them, to do homework, or socialize with peers. Now we have an office that barely holds three people,” he says.

Being a leader in TWA is a great way for students to prepare themselves for the workplace after graduation, he notes. “It prepares me and my team to work in groups and manage our time. It teaches us how to delegate work and to be in charge of people and their work.”

These experiences help members visualize management and leadership positions they can strive for in their careers. “We don’t always see ourselves in a boss position, but TWA gives our leaders a glimpse into that and prepares us for that possibility,” Crisostomo adds.

The decision to bring Cornel West back to campus is an example of TWA’s collaboration with other areas of the campus community. (West first spoke at Worcester State on May 3, 2008.) The organization’s leadership joins with representatives from the Multicultural Affairs Office and academic programs like women’s studies, sociology, psychology, and urban studies to select who to invite for the annual Courageous Conversation lecture.

“We hope that he’s going to be able to open a door so that we can be able to speak more about the issues that are happening around the country, how those issues affect our view, and see if they are happening here at Worcester State and, if so, how we can fix them,” Crisostomo says about West. “I was happy that the president asked the whole campus to attend the speech because that means he’s supporting TWA.” 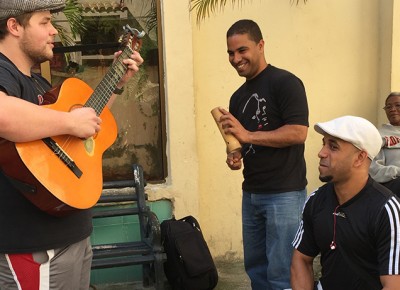 One year after restoration of full diplomatic ties between the United States and Cuba was announced, Assistant Professor Kara Medeiros took a small group of Worcester State students there to study . . .