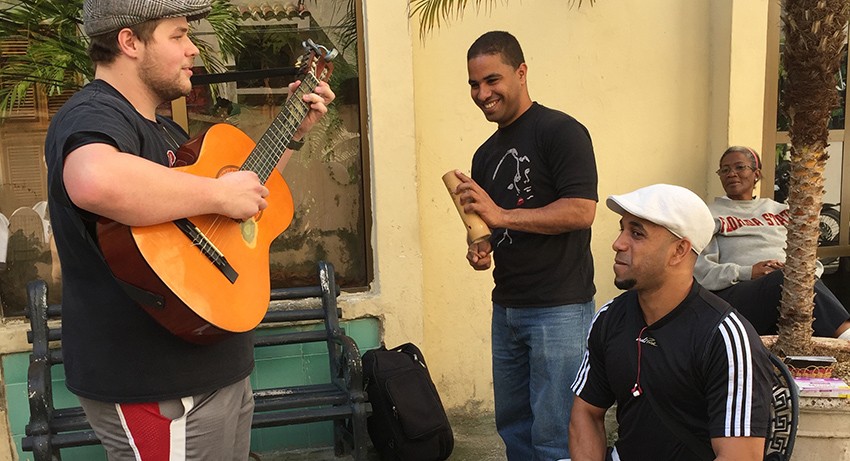 One year after restoration of full diplomatic ties between the United States and Cuba was announced, Assistant Professor Kara Medeiros took a small group of Worcester State students there to study Cuba’s approach to special education.

“Cuba was an amazing experience considering we were there right after the change,” says Medeiros, who teaches in the Communication Sciences and Disorders Department.

The two-week trip was “a discovery process because we don’t have a lot of information readily available,” she says. “Each student had to compare and contrast an area of special education and collect primary source data.”

Medeiros held two meetings on intercultural communications and learning before the trip to help the students gather this information effectively. Once in Cuba, the group spent their mornings attending lectures at the José Martí Center and the afternoons visiting a school.

“What was really empowering for me was that everyone knew how to phrase their questions,” she says. “They got really great information because they stayed on message.”

“One of the more interesting results was that they took note of the differences between each school. Some were very party-line and others seemed less state-run. It was good for the students to see that juxtaposition,” Medeiros notes.

“For what the Cuban people have financially, they are doing incredible things,” she says. “Their teacher training is phenomenal. They really take the time to understand disabilities. It’s a six-year program. Each person has to take anatomy and physiology their first year. Then they spend the next five years learning everything there is to know about each disability.”

Cuban speech-language-hearing teachers learn about special education in general, and in their last year, they study their chosen disability and the population with that condition, Marz adds.

“Going into those schools as a training professional in the field of special education and seeing the way this culture handles that was amazing. They’re a very family-oriented system. They are training each child to function at their optimal level in their communities,” she says.

Marz’s passion is pediatrics, and she’s interested in integrating students with disabilities in regular classrooms. She was pleased to see that Cuba has embraced this. “In all of the special education schools we visited, their goal is to get all of their students back into the regular classrooms. They work toward this goal every day,” she says.

When Vincent Ricci saw a poster advertising the trip hanging in the History and Political Science Department, he jumped at the chance to go.

“There was no way I would let this pass. Cuba was on my bucket list,” says Ricci, who is a senior majoring in history, minoring in political science, and the president of WSU’s Amnesty International chapter. “I made it there before President Obama.”

Cuba was somewhere Marz “always wanted to go.” She had been to Ecuador and Mexico on service-learning trips in high school and “found them very similar.”

“I’ve always heard about Cuban culture, its music, its protected nature,” she says. “The fact that it was a class that related to my major was also enticing. It’s something I can put on my resume that a lot of other people can’t.”

Leila Jachimczyk’s mother was a little hesitant to let her go on the trip, but soon changed her mind. Even Jachimczyk, a senior CSD major, admits that she “really did not know much about Cuba besides the whole Cuban Missile Crisis.”

Today, she is glad she went. “I could never imagine a more beautiful country. It was an amazing experience to be able to go at such a crucial time in its history as well as the United States’,” she says.

In addition to “the streets filled with 1950s Chevys and Mustangs of all different colors,” Jachimczyk says the group was “able to see cruise ships in the harbor, which even stunned the locals since it was a brand new experience for them.”

When they weren’t attending a lecture or visiting a school, the group went sightseeing. The sea wall in Havana, called the Malecón, made an impression because the men fished from shore and boats had been placed in the water only recently. They also visited Viñales to see the countryside and a tobacco farm.

“Peter and Max, two students on the trip who spoke Spanish, made friends with many locals and were able to tell us about [the locals’] experiences,” Jachimczyk says. “We also learned how to Cuban salsa dance with local dancers and stayed in the same residencia as actress Anna Sophia Robb!”

Medeiros was impressed by the Cubans’ ingenuity. “In Cuba, plastic bags are saved and used for years,” she says. “They take great pride in their máquinas (collective taxis) and how they’ve kept those cars running. They see those cars as precious things.”

When Medeiros began exploring her idea to organize a student trip abroad to study another country’s approach to special education, she focused broadly on Latin America. She zeroed in on Cuba after discovering that its education system is well-regarded by the United Nations.

Medeiros was able to plan this trip prior to the December 2014 announcement that diplomatic relations would be restored based on President Barack Obama’s 2009 decision to lift travel restrictions to Cuba that permitted travel there for educational and religious purposes.

Next, Medeiros created a communication sciences and disorders special topics course that would count as a global studies course or liberal arts and sciences curriculum requirement for non-CSD majors. In addition to eight CSD students, she had an occupational therapy student, a secondary education student, a history and political science student, a Bridgewater State University student, and a member of the WSU Intensive English Language Institute staff sign up for the trip. She used Academic Programs International to handle the trip’s logistics.

Ricci, who is planning a career in international development, liked how the trip introduced him to a new policy area and an education system admired by the United Nations Education, Scientific, and Cultural Organization.

He says that he paid particular attention to how Cuba has created a sustainable special education system. Starting in July, he may have opportunities to apply what he learned to what he does working for Manna Project International in Ecuador.

“I believe, as being some of the first Americans to go there at such a critical point in our history, we were lucky to be in a position to go on this adventure,” he says. 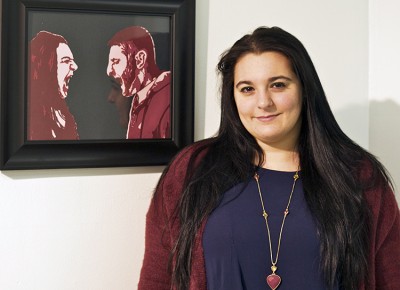 Arts Worcester kicked off its 12th annual College Show in early February and awarded prizes to nine students, two of which attend Worcester State University. The provocative show displays some of the . . .