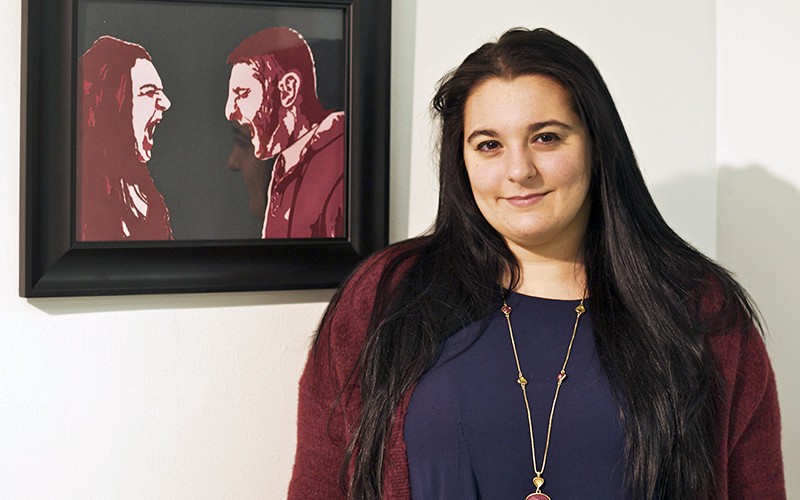 Arts Worcester kicked off its 12th annual College Show in early February and awarded prizes to nine students, two of which attend Worcester State University. The provocative show displays some of the best raw talent of Worcester area college and university student artists, in and outside of the classroom.

Christy, a senior Visual and Performing Arts major concentrating in art, just joined Arts Worcester this past summer and almost immediately found herself enrolling in the College Show. With just construction paper and a glue stick, Christy layered emotion with each intricate piece of red paper she placed on her piece and commanded the audience’s attention.

“I like to make art that’s very close to my heart—something I really love and that’s my family,” says Christy. But, she admits that her piece is relatable; everyone knows that love-hate sibling relationship.

Christy’s piece was distinctive—not common—as was Avato’s prize-winning linoleum block print, an art form rarely seen at Arts Worcester and beautifully crafted. (Avato could not be reached for comment.)

Such is the purpose of Arts Worcester—to uncover hidden local talent. Not only does this vibrant organization provide workshops, needs grants, and open shows for all ages, but it also pays particular attention to what it likes to call the “next generation of artists.”

Several colleges and universities, including Worcester State, have even made membership free for its students.

“I think Arts Worcester is a great program,” says Christy, a lifelong Worcester-area resident. “I love Worcester and [Arts Worcester] is great for colleges—it gives you an opportunity to get your work out there.”

This confidence is crucial, especially for young students, art majors or not. In fact, many students who submitted artwork to this year’s College Show are not art majors.

Though she is a senior art student who has completed numerous art projects throughout her time at Worcester State, this was the first real juried show Christy has ever displayed her work in. “Winning this award really gave me the confidence I needed with my art,” says Christy, and that, “it’s like…okay, this is something I can pursue and possibly succeed at.”

Worcester State, area colleges and universities, and Arts Worcester all highly encourage students of any level to submit their work to the Arts Worcester College Show each year. Worcester State students, in particular, are urged to use the free membership that is offered during their time as a student.

This year’s show, displayed in the Aurora Gallery at 660 Main St., Worcester, will run until Friday, Feb. 26 and is open 1 to 4 p.m. Tuesdays and Thursdays and 10 a.m. to 4 p.m. Wednesdays, Thursdays, and Fridays. The gallery is closed Mondays and Sundays, but appointments can be made for viewing outside of the gallery hours. 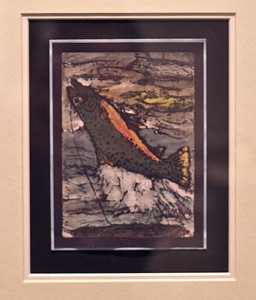 Kate Tattan ’16 is an English major. She also took the two featured photos of Olivia Christy and Trout Rising. 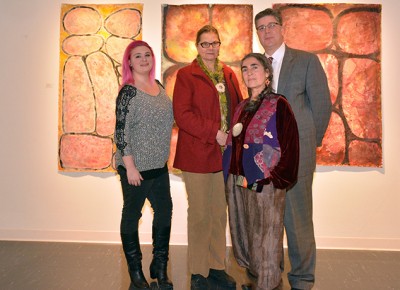 Select Artwork by WSU Art Students on Display in Gallery

The artwork selected for this year’s Student Art Show was handpicked as the “best of” by WSU’s art professors from works created by arts students in the Visual and Performing Arts Department. . . .