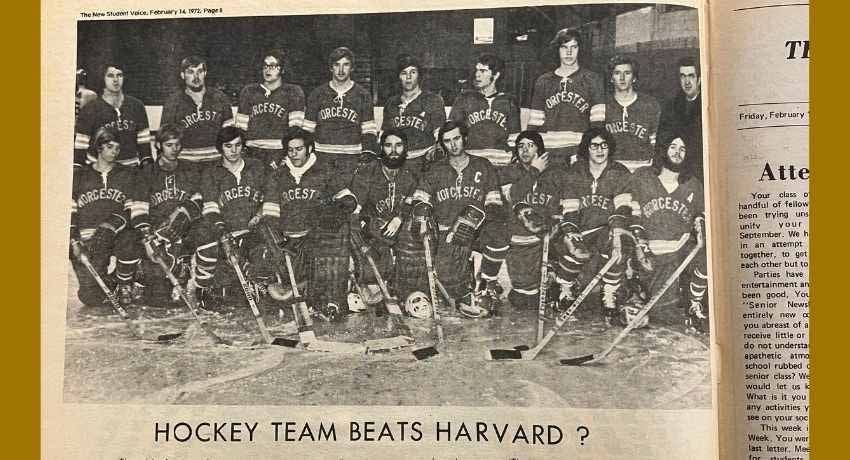 Seven former student-athletes and the 1971-72 Worcester State University men’s hockey team will be inducted into the Lancer Athletics Hall of Fame on Sept. 23.

Honorees include players from volleyball, track and field, football, and men’s and women’s basketball. Alumnus James “Jim” Hughes ’76 will be honored posthumously for this enduring legacy as a hockey player from 1971-74. In addition, 2020 honoree Alyssa (Jasper) Guzman ’15, who played volleyball, women’s basketball, and track & field, will be inducted as she was unable to attend her class’s ceremony due to the pandemic.

Established in 1985, the Athletics Hall of Fame awards are given every other year to outstanding athletes for their sportsmanship, leadership and character, as well as coaches and others who have contributed to the athletics mission. This year marks the 30th Hall of Fame induction. The dinner and ceremony will be held on Friday night during Homecoming Weekend at the Wellness Center starting at 5 p.m. Registration is still open.

“We are excited to recognize the accomplishments of some outstanding student-athletes that have come through and represented Worcester State in such a positive manner,” said Athletics Director Michael Mudd. “It will be terrific to put some faces with names of some individuals that I have heard great things about over my years at Worcester State.”

Here are this year’s inductees:

Volleyball, Basketball, and Indoor and Outdoor Track and Field

Chrissy Mitchell Gaffney ’89, a track and field team captain, was one of a two-member track team that placed second in the 20-lb weight throw with a throw of 43 feet, 5 inches at an exhibition event at the NCAA Division III Indoor Track and Field National Championship, in 1989. With a throw of 136 feet, 5 inches, she broke the school record in the hammer throw held at Bridgewater State and advanced to the NCAA Outdoor Track and Field New England Regionals; she also broke school records in the discus and hammer over her two-and-a-half-year career. Additionally, as a co-captain of the 1987–88 women’s basketball team under head coach Jim Underwood, she led the team in rebounds for the season. Rounding out her athletic success at Worcester State, Chrissy helped the 1986 volleyball team, coached by Laura Habacker, to a 27-1 season and a third straight MAIAW appearance and second championship in three years.

This honor is posthumously bestowed on James Hughes, who left a lasting legacy with the program that still resonates today. Jim Hughes ’76 was a pivotal member of the Worcester State men’s ice hockey program from 1971 to 1974. After two tours in Vietnam where he was injured twice, Jim came back to Worcester as a freshman. During his three-year career, he amassed 87 assists and 33 goals, for 120 points, placing him in the top 15 for career points and assists, 11th in points and 5th in assists. Nearly half of these assists came during the ECAC Championship ’71–’72 season, where Hughes recorded 42 assists, a mark that remains unbeaten to this day. During his time with the squad, the Lancers recorded a 48-20-1 record, winning two ECAC Championships under coach John Coughlin Sr., laying the groundwork for what would eventually become a five-year run in the ECAC Tournament.

Kemani Jones ’16 was a four-year member of the Worcester State football team from 2011 to 2015, currently sitting in the Lancers record book as the statistical leader in a multitude of categories. His largest contribution came from the backfield, where he set multiple records for his performance. Noted as one of the most versatile and dynamic players to step on the field, Jones led the team in rushing yards and total points scored, cementing his impact and contributions with the program. He recorded 1,275 yards rushed during the 2014 season and 3,095 career rushing yards with 35 career rushing touchdowns. While Jones was a 2X All MASCAC and 2014 All New England Running Back, he set records in a number of receiving categories and spent three seasons on the kick return unit, amassing 4,296 yards of all-purpose yardage while on the field and being named captain during his senior season.

Sacha Ashton Langford, local 1,000-point high school standout at Burncoat High School, was a four-year member of the women’s basketball program. Over her career with the Lancers, Ashton Langford reached unparalleled success while also caring for her first child. On the court, she was named a 2X MASCAC Player of the Year and a Division III All-American and is in the 1,000-point scorer club with 1,032 points and 11.9 points per game. Ashton Langford currently sits on the 1,000-point list at both Burncoat High and Worcester State. She also notched 242 career steals, currently placing her second on the WSU leaderboard, while leading for career average steals, and was honored as the WSU Senior Athlete of the Year. Ashton Langford now runs, with her husband, a summer basketball camp focused on utilizing their diverse backgrounds and passion to inspire the next generation.

Thomas White ’76 was an integral member of the Worcester State men’s ice hockey program from 1971 to 1975. White served as captain of his squad during his senior season and was a key piece of the program’s history, starting in the line-up all four years. Over his career, the Lancers recorded a 61-28-1 record, and White was a member of two ECAC Division III Championship teams, along with a semifinal appearing squad. He is currently a member of the Hall of Fame for his participation with the 1973–74 Championship team. White sits 5th and 6th in team scoring for the 1971–72 and 1972–73 seasons. He recorded a career 32 goals and 74 assists, for 106 points where White currently sits 14th on the all-time scoring list.

Malcolm “Big Dog” Person was a three-year member of the men’s basketball program from 1971–74, serving as captain during the 1973–74 season, leading the team to the NAIA Tournament. He was named a three-time MASCAC 1st Team All-Conference and All New England Selection, becoming an Honorable Mention All-American in 1974. Person tallied 928 rebounds, 13.3 rebounds per game, and a record high 33 rebounds versus Fitchburg State, and 1,725 career points, with a 24.6 points per game and a record-leading 49 points in a single game on December 20, 1971, versus Nichols College. Widely recognized as one of the most dominant players in Worcester State basketball history, he ended his career with 70 percent wins and sits atop the Lancer record books in numerous categories for both his prolific scoring and rebounding.

Richard “Sonny” Price was a three-year member of the men’s basketball program, serving as captain during the 1974–1975 season, being selected as the team MVP at the end of the season. Price was a member of the 1973–74 NAIA Tournament team and was named an Honorable Mention All-American in 1974 at the conclusion of the Lancers’ first trip ever to a national post-season tournament. Price was twice named as an All New England First Team Selection and was also a two-time Massachusetts State College Conference first team all-star from 1973 to 1975. During Sonny’s three years with the Lancers, he amassed 1,308 points in only 57 career games. His career average of 22.9 points per game remains second all-time in Lancer history. Price is regarded throughout New England as one of the greatest backcourt players of his generation. He has spent the last 50 years working with the Nazareth Home for Boys, which provides high quality education and specialized services to youth and their families without discrimination and within a community-oriented environment.

The 1971–72 squad recorded an overall 21-3 record for the season, the best record in program history to date, under coach John Coughlin Sr. The team amassed 252 goals, averaging 10.5 goals per game, a record that currently sits as the most in program history, as well as conceding only 94 goals on the season. The players accumulated 584 points on 252 goals and 329 assists. Over the years, a number of the team’s outstanding players have been recognized with Hall of Fame awards. The team still holds the record for winning percentage in a season with .875 and three shutouts. Over the stretch of 21 wins, the team held a 12-game winning streak.

Worcester State’s athletes are making the grade in the classroom and on the field with many achieving GPAs of 3.0 or higher for the Spring 2022 semester. “They’ve been great at both things . . .