Worcester State’s athletes are making the grade in the classroom and on the field with many achieving GPAs of 3.0 or higher for the Spring 2022 semester.

“They’ve been great at both things – athletics and academics,” Athletic Director Mike Mudd said. “They’re excelling, and that’s what we aim for. We want a commitment to excellence in all areas.” 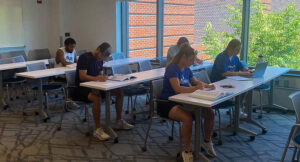 Student athletes is a special study hall in the Wellness Center

improvement over previous years, Mudd said. Last semester, 24 student athletes earned a GPA of 4.0. “That’s a great achievement and it shows that we have some stellar student athletes here,” he said.

“We continue to get solid student-athletes here at Worcester State, and they’re becoming even more successful,” said Karen Tessmer, associate athletic director, and longtime head coach of the women’s basketball team. “The women have always had a lot of success in the classroom, and our men are doing a little bit better in part because the coaches have been placing an emphasis on it.”

Tessmer said the coaches’ efforts are among campus-wide initiatives aimed at keeping students on track. “It’s not just athletics, but there has been a real focus throughout the university, driven from the president’s office, on student retention and providing them with the support they need to succeed,” she said.

To that end, it’s critical for coaches to stay very involved with their players, Mudd said. “It’s very important to check in with them and make sure they’re doing well and hold them accountable academically because, at the end of the day, it would be a shame if they come to Worcester State but don’t survive academically,” he said. “It’s a priority for our coaches to make sure their student-athletes make progress and graduate in four years.”

Kelly Downs, coordinator for student athlete support services, came to Worcester State in 2013 to bolster retention efforts and help student athletes stay on course academically. Student-athletes often have challenging schedules with full course loads, team practice and competition travel. Downs, who also is the women’s lacrosse head coach, deals with high-achieving athletes as well as ones that may be struggling with coursework.

Among perks for high achievers is a national honor society for student-athletes called Chi Alpha Sigma, into which they can be inducted in their junior year if they have a GPA of 3.4 or higher.

For the student-athletes who need more academic support, Downs holds biweekly meetings to check in with them and make sure they’re going to class and doing well. If their GPAs start to dip or there are other signs of academic struggle, they are required to attend a special study hall set up for student-athletes in a classroom on the second floor of the Wellness Center.

“This is a great place for them to study,” Downs said. “Being in the Wellness Center is awesome because if they have practice, let’s say from 5 to 7, they can come right in, go to the locker room, change, shower, and then go right upstairs and get an hour or two of study hall in. Or if they go to dinner in the dining hall at 5 p.m. they can come in afterwards and get some hours done before their night practice.”

Once a student’s GPA hits the 3.0 level, they “graduate out” of study hall, but some continue to attend even after they are no longer required to. “I have student-athletes tell me all the time, ‘Can I still come to study hall if I graduate out?’ I say, ‘Yes, absolutely. You don’t have to tell me twice that you like study hall. The more the merrier.’ They tell me they like the structure. They like knowing they can come in two or three times a week to get their work done.”

A peer mentorship program also has helped keep student athletes on track for graduation. Two representatives from each team who are successful on the field and in the classroom are tapped to keep an eye out for teammates who might need a helping hand.

“They are students who are respected both athletically and academically and so they’re really that resource, that middle person between their coach or someone who works in the department for their team,” Downs said. “They’re that person who’s there every day in the locker room. They see them in the dining hall. They can be a mentor, but if they don’t know the answer to a question, they’ll come to the coach or me and ask, ‘Where do I send this person?’ Usually I’ll just take the situation off their hands at that point, but it’s a program that has been really successful for us.”

Mudd said as early as orientation, student-athletes are told to view athletics not as an end in itself, but as a stepping stone to prepare them for the real world.

“We tell them, ‘Athletics has provided a way for you to get into a good school and play the sport you love for another four years, but the reality is you have, probably, 50, 60, or more years of life after college and what you do in the classroom directly impacts what the rest of your life will be like,’” Mudd said. “The combination of managing athletics and academics together – there’s not a better preparation for the real world. And if you can prove to an employer that you can balance your time and earn a great GPA on top of being a college athlete, that’s pretty special and really makes you stand out from the crowd.” 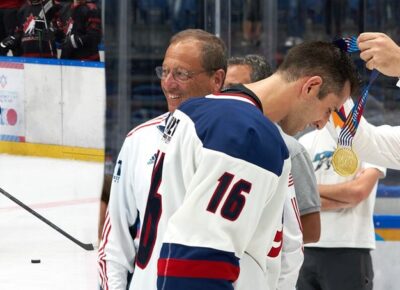 Most athletes never get the chance to play internationally, let alone represent their countries while doing so. It’s an honor that few ever have the chance to achieve. For senior Max Roth, this is . . .