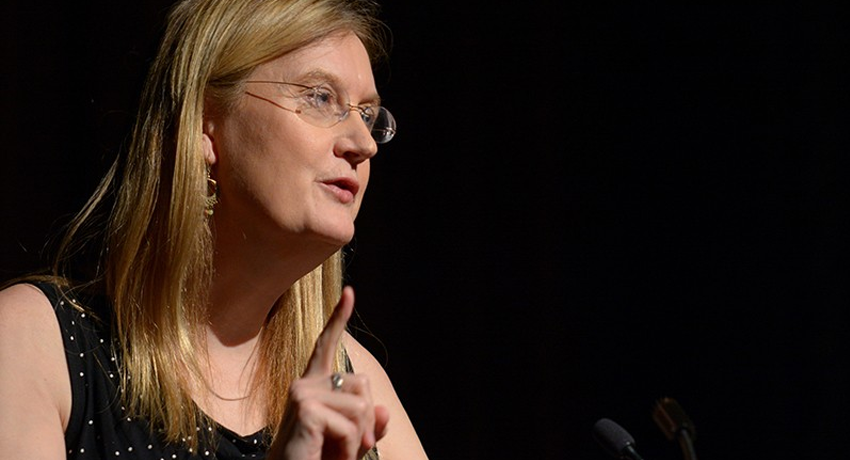 At one of her lowest emotional points before coming out as transgender, a reassuring voice told Jennifer Finney Boylan not to worry. It gets better.

And it certainly did.

Boylan weathered that difficult personal storm to become an internationally renowned advocate, a regular op-ed contributor to the New York Times, a member of the Board of Trustees for the Kinsey Institute of Research on Sex, Gender and Reproduction, and the author of several books, including “She’s Not There: A Life in Two Genders,” regarded as the first best-selling book by an openly transgender American. She also appears regularly on the E! documentary series “I Am Cait,” with Caitlyn Jenner.

Boylan explored themes in “She’s Not There” in an engaging and often humorous talk before a standing-room-only crowd of students, faculty, staff, and members of the public in Fuller Theater Feb. 25. The lecture was co-sponsored by several departments and programs at WSU and was part of the University’s Theme Semester, which is “Seeing/Believing: Evidence, Perception, and Interpretation.”

Boylan also interacted with students earlier in the day, offering a craft talk for a group of about 30 students in the afternoon, discussing strategies she uses as a working writer. “She identified herself as a storyteller, first and foremost, rather than as a policy person,” said Karen Woods Weierman, professor of English and director of WSU’s Commonwealth Honors Programs. What were Weierman’s favorite Boylan takeaways? “’Telling stories opens hearts’ and ‘It’s impossible to hate anyone whose story we know.’” After the craft talk, Boylan met with about 10 members of the Pride Alliance, a WSU student organization.

“We’ve already had great feedback from students,” Weireman said, after Boylan’s visit. “Jenny’s warmth, skill as a writer and speaker, and wickedly funny sense of humor put them at ease.”

The stories among the transgender community are varied, Boylan said in her talk.

“If you’ve met one transgender person, you’ve met… one transgender person,” she said. There are a lot of different ways of being trans, an umbrella term short for transgender, so you could get five people who all identified as trans in a room together and they might have almost nothing in common, she said. For that reason, stereotypes are especially problematic and trans people are not served well by any one person as a be-all embodiment. Every way of being trans, or of being gender non-conforming, she said, “or for that matter being queer or for that matter of being human—every way is cool.”

Focusing on the often small differences between, say, a cross-dresser and someone who identifies as gender queer misses the point, according to Boylan. “Maybe what we really need to do is just open our hearts. Do we really need to know a whole lot more than that? Love people. Love each other.”

That sounds simple, but it can be extremely challenging. “It actually turns out to be the hardest thing in the world because they don’t see the world the way you do, not being you and everything. But the world is full of people who are not you,” she said.

There are many ways to bridge the gap, however. “So what do you do? Open your heart. Try and have a conversation. It could be awkward, maybe really awkward. We all want to be loved and yet we are all terrified of expressing that love, but that’s what it means to be human.”

It was a loving voice that spoke to Boylan years ago when she—actually still “he” at the time—was standing dangerously close to the edge of a cliff high over the Atlantic Ocean, looking down at the waves crashing against the rocks below. Boylan, who is 57, was just out of college then and in the depths of a desperately lonely gender identity struggle. Like the rest of society at the time, Boylan had never even said the word “transgender” out loud before.

As the troubled young man hovered dangerously close to the edge of the cliff, an unexpected gust of wind suddenly pushed him back from the precipice. He fell onto a soft bed of moss and heard, “You’re going to be OK. You’re going to be alright.” Boylan is still not sure whose voice that was. “My guardian angel? The ghost of my father? Jesus? I don’t know,” she said. But from a vantage point over 25 years later, she said her heart tells her that the voice was, perhaps, that of her future self, the woman that she eventually became.

“Looking back on that sad young man, I wanted to tell him that it will get better,” she said. “It will not always hurt the way it hurts now, and the thing that you feel right now is your greatest curse will someday, against all odds, turn out to be a gift.”

It’s hard to be gay or lesbian or bisexual, and to be trans can be even harder, she said. There also have been plenty of times since she heard that voice when she has, momentarily, lost all hope. But through all those years, she said, “I have found to my surprise that most people have treated me with love. Some of the people I most expected to lose when I came out as trans turned out to be loving and compassionate and kind. I can’t tell you how to get here from there. You have to figure that out for yourselves. But I do know that instead of going off that cliff, I walked back down the mountain that morning and instead began a long, long journey toward home.”

This article was written by freelance writer Nancy Sheehan. 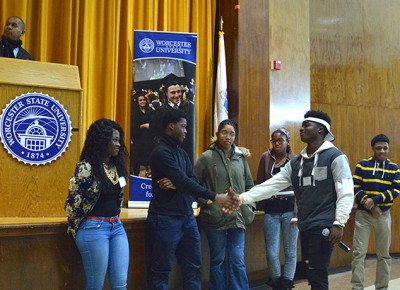