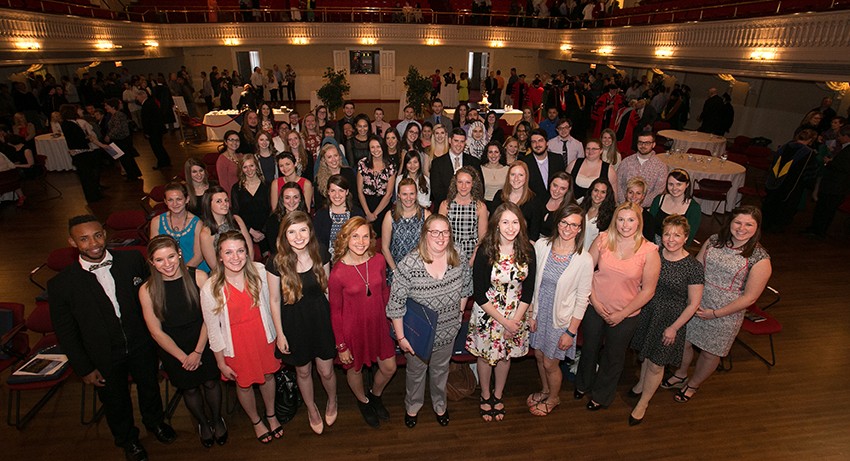 The event recognizes the highest ranking students in each of the academic disciplines, as nominated by department faculty. Special awards also were presented during the ceremony, including the Lt. Col. James F. Sheehan ’55, USMC Ret. Awards to the students with the top G.P.A. in each class, other academic recognition awards, the University Awards, the Presidential Award, and the Ella M. Whitney Award.

In recognition of his outstanding service to the United States and his unwavering commitment to WSU students, the University also awarded a doctor of humane letters, honoris causa, to Lt. Col. James F. Sheehan ’55, USMC, at the ceremony.

“His unwavering commitment to and support of the brightest of Worcester State University’s students will be the lasting legacy of a successful man who says he simply wants to pay it forward,” said Vice President for University Advancement Thomas M. McNamara ’94, reading from the honorary degree commendation. “Lieutenant Colonel Sheehan’s continued generosity allows our students to blossom and grow.”

Because of health reasons, Sheehan was unable travel from his home in Florida to accept the award. Fittingly, a former three-time recipient of the Sheehan scholarship, Captain Jeff Hart ’09, accepted the honorary degree on Sheehan’s behalf. Hart is the battalion advisor to the Naval ROTC Program at the College of the Holy Cross and is responsible for overseeing the naval science courses that Worcester State, Holy Cross, and WPI students are required to take as part of their ROTC programs.

A native of Framingham, Mass., Sheehan himself received a scholarship while a student at WSU, paying for his $75-a-year Worcester State Teachers College tuition aided by a scholarship established by Massachusetts writer Olive Higgins Prouty from an honorarium she left after giving a guest lecture on campus.

Fifty years after his graduation, Lt. Col. Sheehan made the largest cash gift in the history of WSU: $500,000 to establish the Lt. Col. James F. Sheehan ’55 USMC, Ret. Endowed Scholarship. Additionally, this gift provides funding for the Sheehan Academic Excellence Awards, which each year provide up to $5,000 to the highest ranking students in the freshman, sophomore, junior, and senior classes. More recently, additional donations have helped fund WSU’s Honor’s Program and the Study Abroad Scholarship Program.

Since the awards were first established in 2007, 62 students have received the Lt. Col. James F. Sheehan ’55, USMC Ret. Award.

Student achievers honored at the ceremony included first-time winners of two awards established in the past year. Kelsey Uppstrom earned the Richard Bisk Mathematics Teaching Award., and Carolyn Griffin earned the Dr. Jean A. and Michael F. Campaniello Award, given to an M.S. in Nursing student for service and community engagement.

Koestner Stresses Need to Deal with the Roots of Sexual Violence

Katie Koestner, the first survivor of date rape to publicly come forward, visited Worcester State University on Thursday, April 26 to speak with students, faculty, and administrators about her . . .