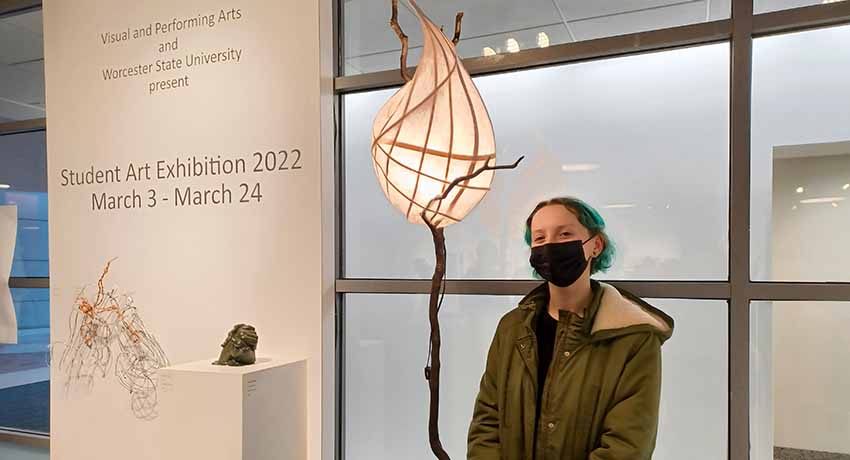 Student Art Exhibition showcases imagination, artistic vision and a skull made of teeth

Artistry, technical skill and talent – and tenacity as well – are on display in the biennial Student Art Exhibition at the Mary Cosgrove Dolphin Gallery at Worcester State University.

The juried show, presented by the Visual and Performing Arts Department, featured over 120 works by 75 student artists for three weeks in March.  The exhibition was not only a wide-ranging display of imagination and artistic vision, but it also showcased students’ resilience and tenaciousness in the face of a seemingly interminable pandemic.

“It’s almost like their creativity has been amplified and they have so much more to say because the rest of their life has been so extra stressful,” Stacey Parker, Professor of Art and Mary Cosgrove Dolphin Gallery Director, said. “They seem to be making new connections and exploring more with new materials. We have things like needle felted pieces and interactive marble games. We’ve never had those before. We have a video and we’ve never had a video in our student show, so the variety is huge.”

Jurors had the unenviable task of selecting award winners from among an abundance of worthy contenders. The Juror’s Choice award, chosen by Kristen Sciascia ’95, owner of C.C.Lowell, a venerable art supply company in Worcester, was given to Autumn Thebodo ’22 for “What Remains.” The People’s Choice Award went to Casey Mullaly ’24 for her painting “Sinister Diamond Field,” while Ashley Hassell ’22 was awarded Best in Show for her painting “After Red Cups and Tulips by Janet Fish.” 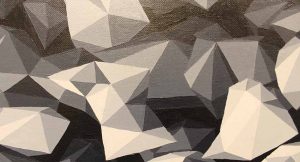 The quality and breadth of the artwork made selecting award winners particularly challenging, Parker said. “There were so many wonderful, creative and unique works in the show that choosing winners was the hardest part of the whole exhibition process,” she said. Best in Show jurors were Parker, Gallery Assistant Brad Chapman, and VPA Senior Instructor Susan Fisher.

“We had to put aside what we knew about the students, the projects and the process and just look at the work,” Parker said. “We each picked our top three pieces and then came together and talked about why we chose them. We realized that each of us had focused on Ashley Hassell’s piece. The skill with the media, attention to detail, use of color and unique format all really spoke to us and made the piece stand out. We all hope that Ashley continues to develop her artistic skills and can’t wait to see what she does next.”

Mullaly’s “Sinister Diamond Field,” is a meticulously executed geometric painting in somber shades of gray. “It’s really dark, but I’m really not like that, I promise,” she said with a chuckle. “It kind of has that mischievous, dark, dreary, mysterious kind of look to it.” 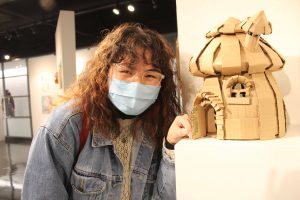 Britney Thai-Do and her cardboard house

Inspiration for the painting came during physics class when she was learning about triangles and trigonometry. “So, I just did a piece with a lot of triangles, and I like doing 3-D art, so I tried to make them seem to pop out of the painting.”

The piece uniquely blended both of Mullaly’s academic areas of interest. She is doing a 4 plus 1 program that will give her a master’s degree in biotechnology in 2024, with an art minor.

Unique lamp lights up the show

Thebodo said receiving the Juror’s Choice honor for “What Remains” was an affirming experience. “I’m very glad that it was well appreciated by the juror, and it made me appreciate my own work a bit more as well,” they said.

Another work by Thebodo in the show also garnered a lot of attention. A floor lamp over six feet tall called “I Cast Fireball” brought an offer for purchase from a couple among the gallery-goers at the opening reception who said they were immediately taken with the impressive piece. (Thebodo politely declined the offer.)

The lamp’s large luminous shade evokes perhaps a giant milkweed pod or a hornet’s nest and sits atop a tall craggy branch that one could easily imagine serving as a wizard’s cane. Thebodo had found the branch on Cape Cod a couple years ago. They kept it because of the intriguing shape but they set it aside because they were not quite sure how to use it in an art piece. Then, they were given an art-class assignment to make a lamp.

“I was unsure what to do at first then I went home and remembered I had this big stick that I pulled out of a lake on Cape Cod,” they said. “So, it was just ‘Oh my God. I have to do this.’”

Britney Thai-Do ‘22 turned an art-class assignment to make something out of cardboard into a fairyland-like domed domicile she called “Mushroom House.” The highly detailed piece includes individual shingles on the gambrels over the windows and a door that opens and closes. “It took a really long time to make it so I’m pretty proud of it,” she said.

Ally Anger ’25 created a skull made entirely of realistic-looking plastic teeth, called “Brace Yourself.” “My professor told me I had to make a sculpture out of 300 of something and the first thing that came to mind was teeth and a skull,” she said. So, she went online and ordered her toothy art supplies, more than enough of them to meet the assignment’s requirement. “There are about 500 teeth in this piece,” she said. “It took about two months to make it.” 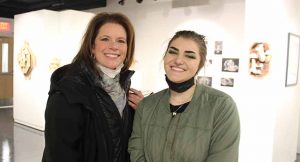 Ally Anger and her dental-hygienist mother, Jaime Russell, at the opening reception.

The tooth concept came quickly to mind because Anger’s mother, Jaime Russell, is a dental hygienist. “I get a lot of inspiration from her just in general and for my art as well,” Anger said.

Her mother attended opening night and said she was surprised that Anger went with a dental theme. “She’s so talented,” Russell said. “But I was actually amazed that she came up with using the teeth for a skull. I figured that was something only I would think of, but I clearly have worn off on her quite a bit.”

The biennial exhibition serves to give students gallery-level experience as well as helping them build confidence in their artistic vision and their work. “I was surprised that my piece was selected, and it makes me feel really proud,” Hoang Tran ’24 said, standing by his colorful, geometric acrylic-on-canvas-board painting. He was inspired, he said, by the challenge of working multiple strong colors into one cohesive painting and learning techniques for applying the colors to best effect. 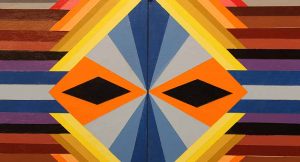 Hoang’s painting was submitted by VPA Professor Michael Hachey, who was Hoang’s teacher for the Painting 1 course. “His craft is amazing,” Hachey said, when asked why he submitted the piece for consideration. “It’s absolute perfection in terms of the use of acrylic and his color mixing is so ambitious and so sensitive that it just had to be in the show.”

All the artwork in the show reflects an extraordinary level of commitment and talent, according to Parker. “The quality of the students’ work in this show is so elevated because they’re invested, they’re diving in and they’re so joyous about doing it,” she said. “As a teacher, it makes my heart sing.” 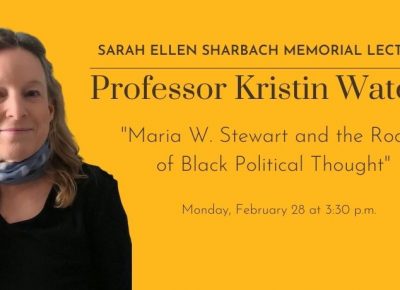