During the week that marks the 40th anniversary of the first message between two computers, Worcester State College students will recognize National Computer Science Education week with a robotics competition, demonstrations and displays.

Juniors and seniors in Karl Wurst’s Robotics course will demonstrate their robots in the Ghosh Lobby, Wed., December 9, from 2:00 to 4:00 p.m.  The student competition will feature robots using “Roomba” technology.  That is, robots without remote controls.  The students must program their robots, to “see” and move items and complete tasks.  “Massachusetts is one of the top two states for robotics in the country,” said Wurst.  “This presents a great opportunity for students to work with real world problems, not just the virtual world of computer programs,” he added.

In addition, there will be demonstrations and displays all day. A birthday celebration with cake in honor of Rear Admiral Grace Murray Hopper, one of the first women in Computer Science, will be held at 10:20 a.m. At 2:00pm, the Robotics class will be having their final competition, running until 4:30pm.

The U.S. House of Representatives, recognizes that “…computing technology has become an integral part of culture and is transforming how people interact with each other and the world around them…computer science is transforming industry, creating new fields of commerce, driving innovation in all fields of science, and bolstering productivity in established economic sectors…the field of computer science underpins the information technology sector of our economy, which is a significant contributor to United States economic output…the information technology sector is uniquely positioned to help with economic recovery through the research and development of new innovations.” 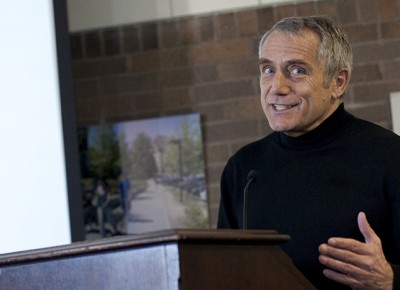 Hamer Speaks About the Gay Gene and Shows Documentary

“I think kids should be accepted for who they are,” said Dr. Dean Hamer, one of America's leading geneticists and author of The God Gene, when he spoke at Worcester State College last week.  The . . .