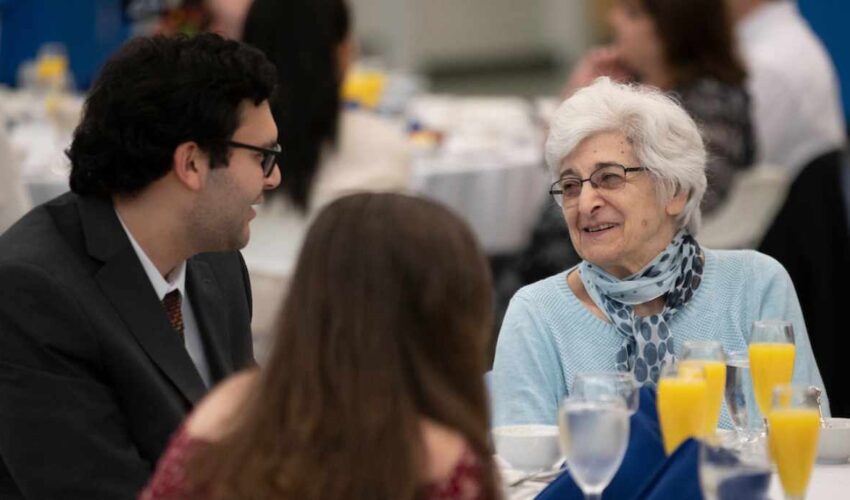 On a recent Sunday morning, the university gymnasium was filled with students and donors – separated by generations, connected by Worcester State University – huddled together laughing, sharing life stories and giving thanks. The university’s annual scholarship brunch brings together donors who fund scholarships with the students who receive them, and this year, more than 250 connected over French toast, fruit and coffee.

“It’s great to be with students,” said Vincent Matulaitis, who with his wife Roseanne funds three scholarships. “They energize you. You actually see the people you are helping, It’s not just a name somewhere on a piece of paper.” 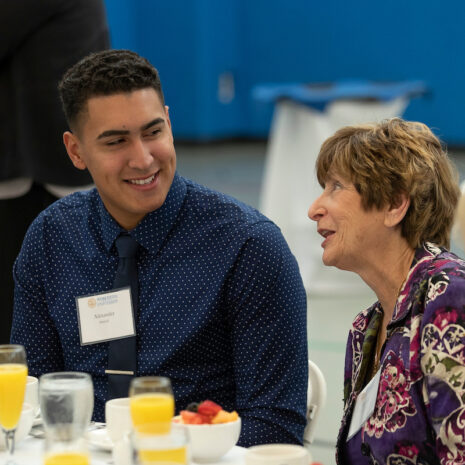 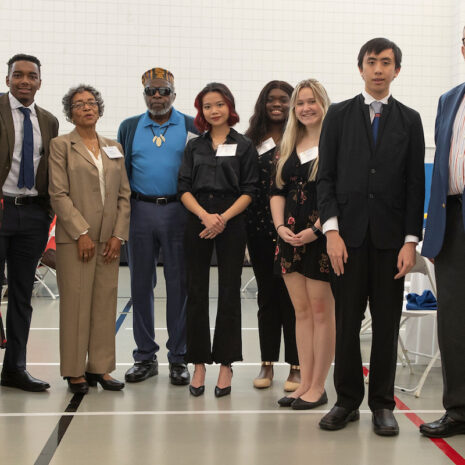 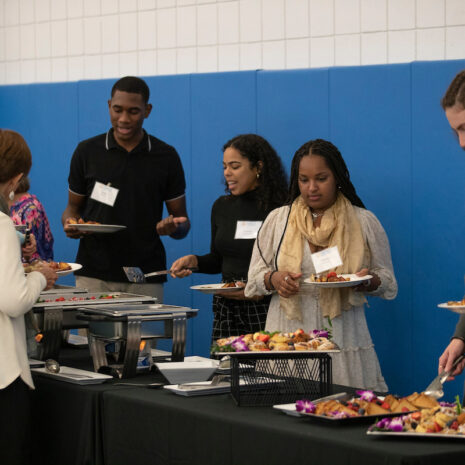 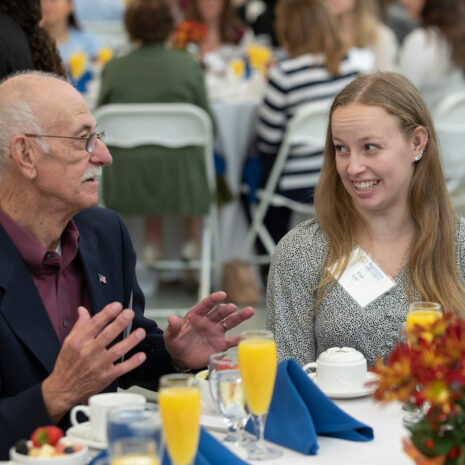 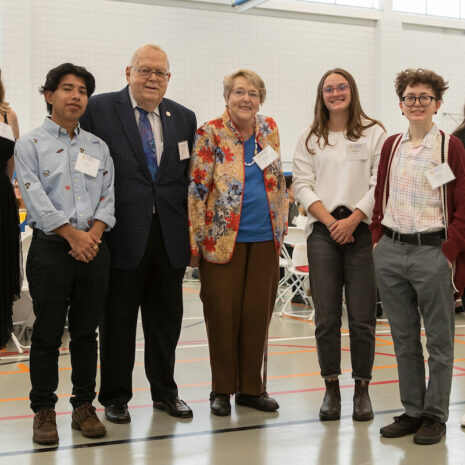 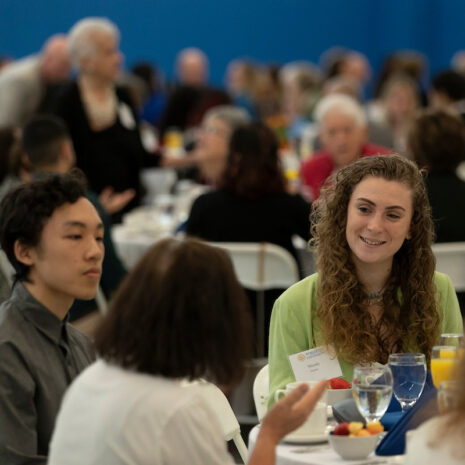 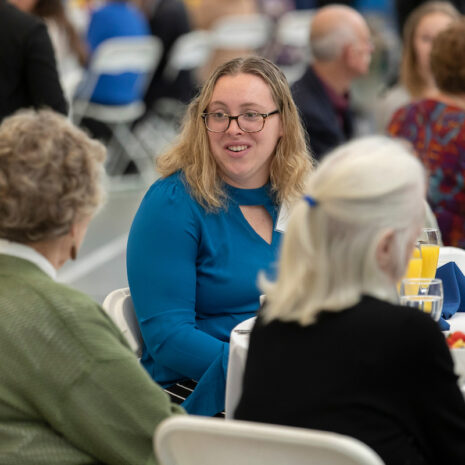 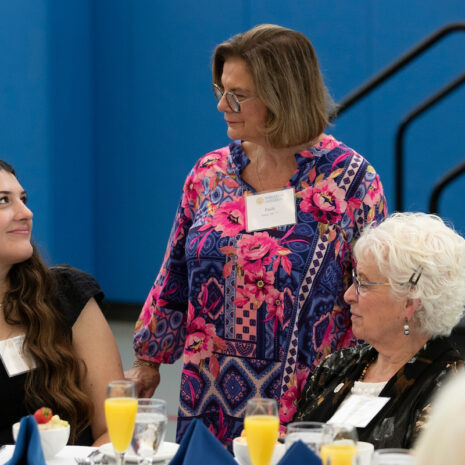 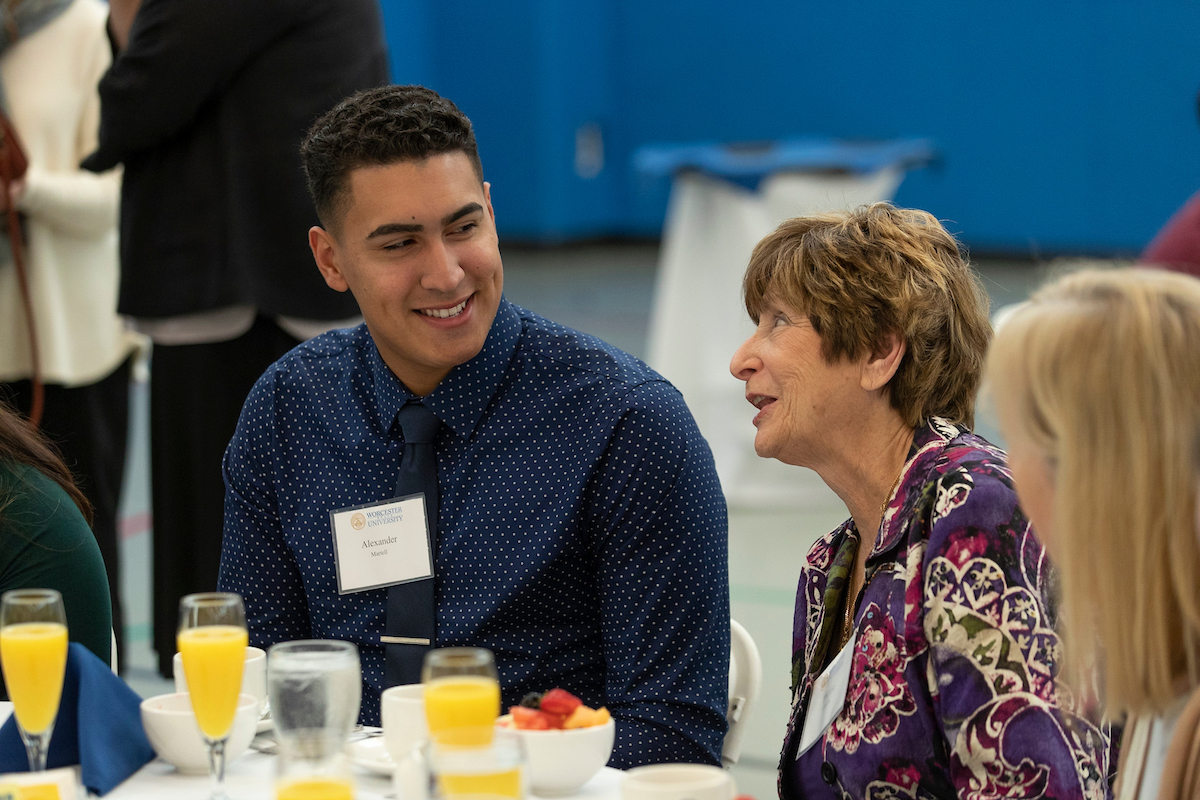 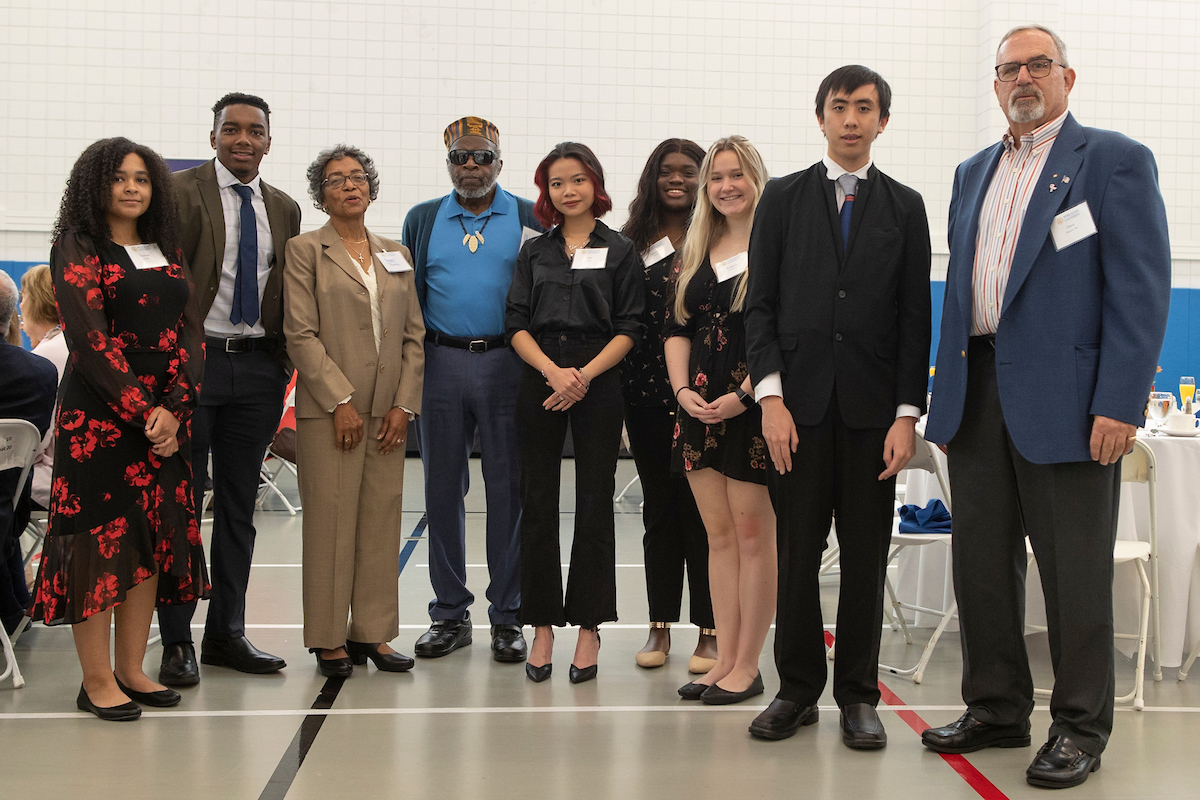 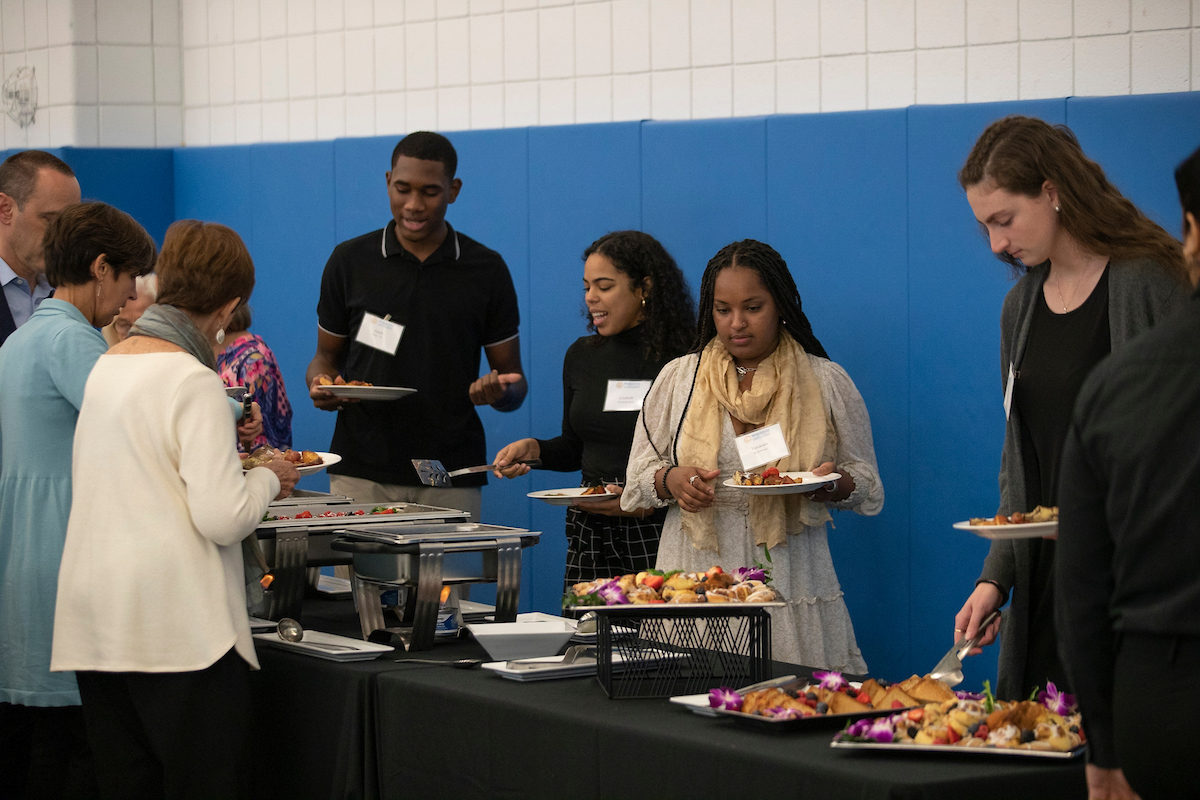 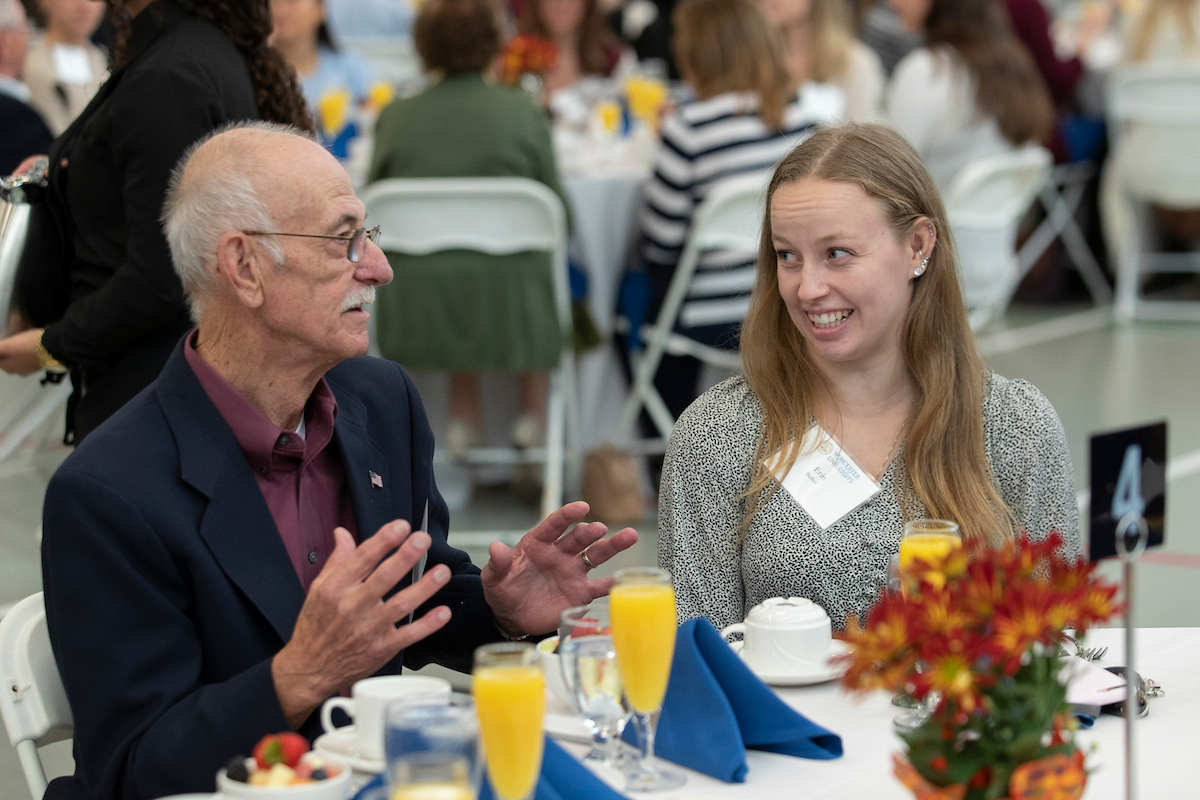 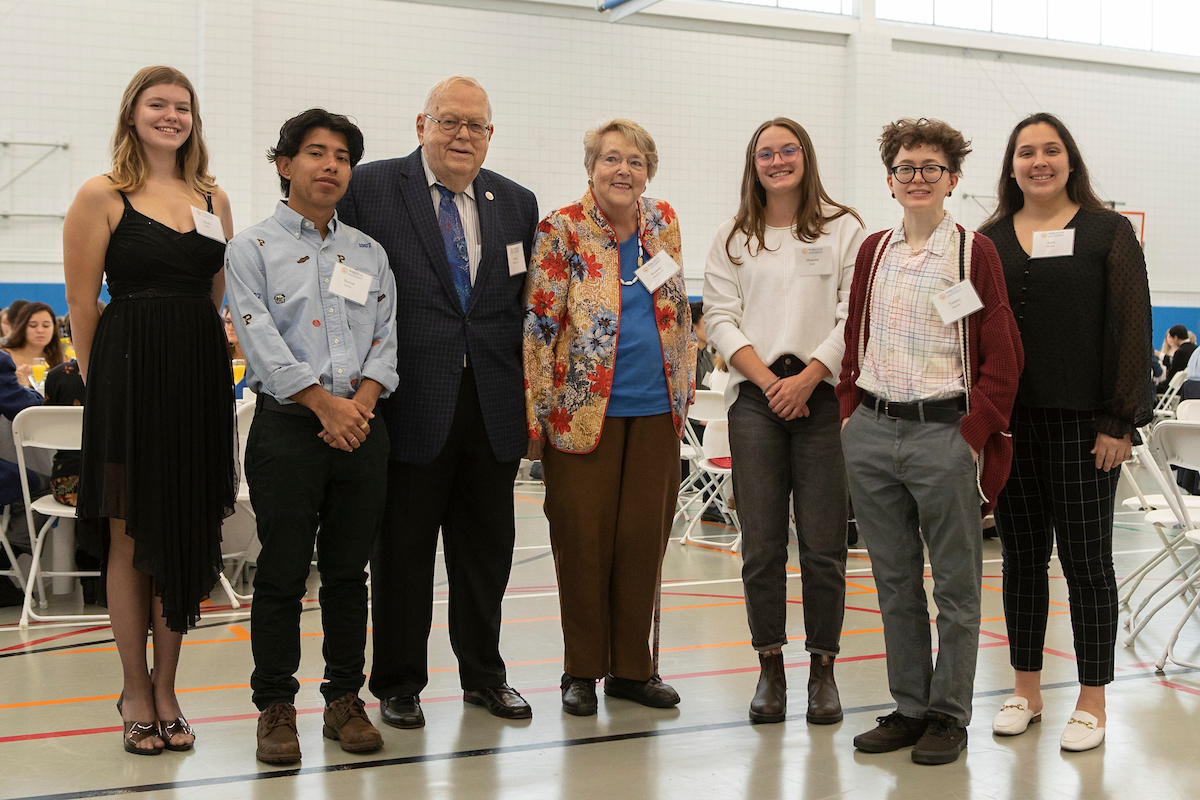 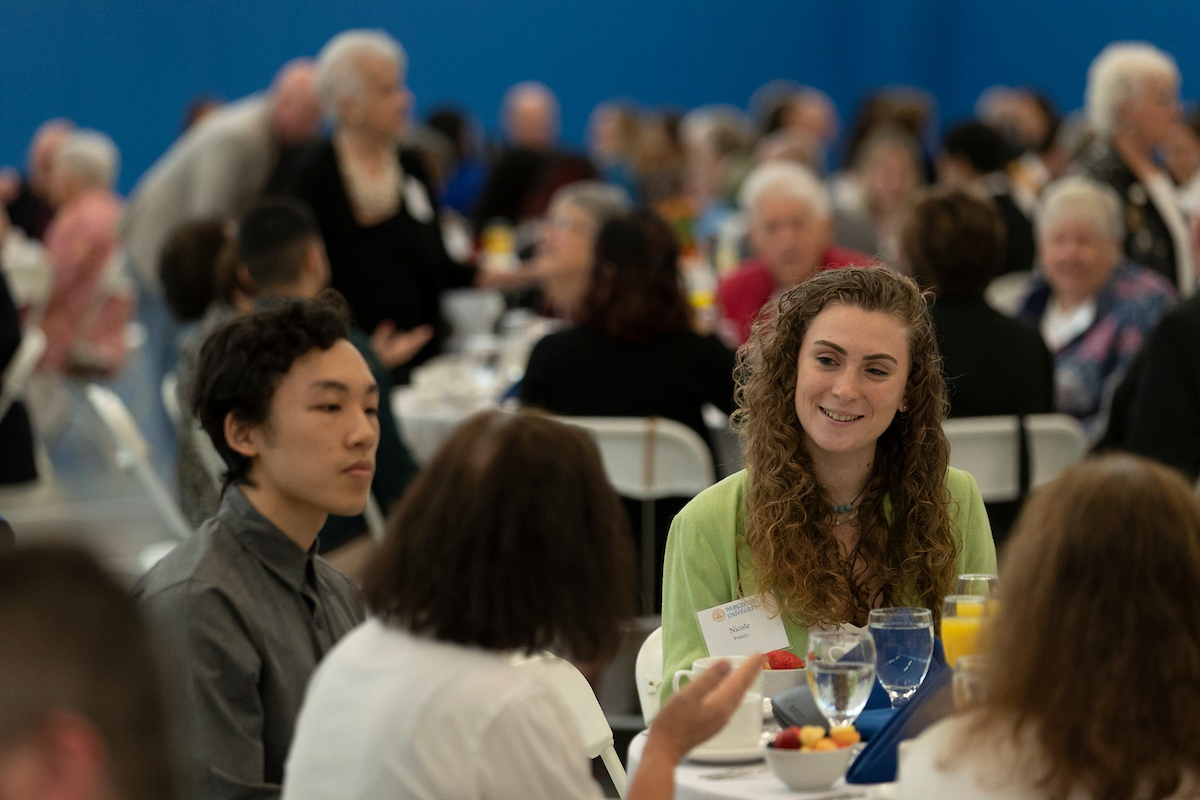 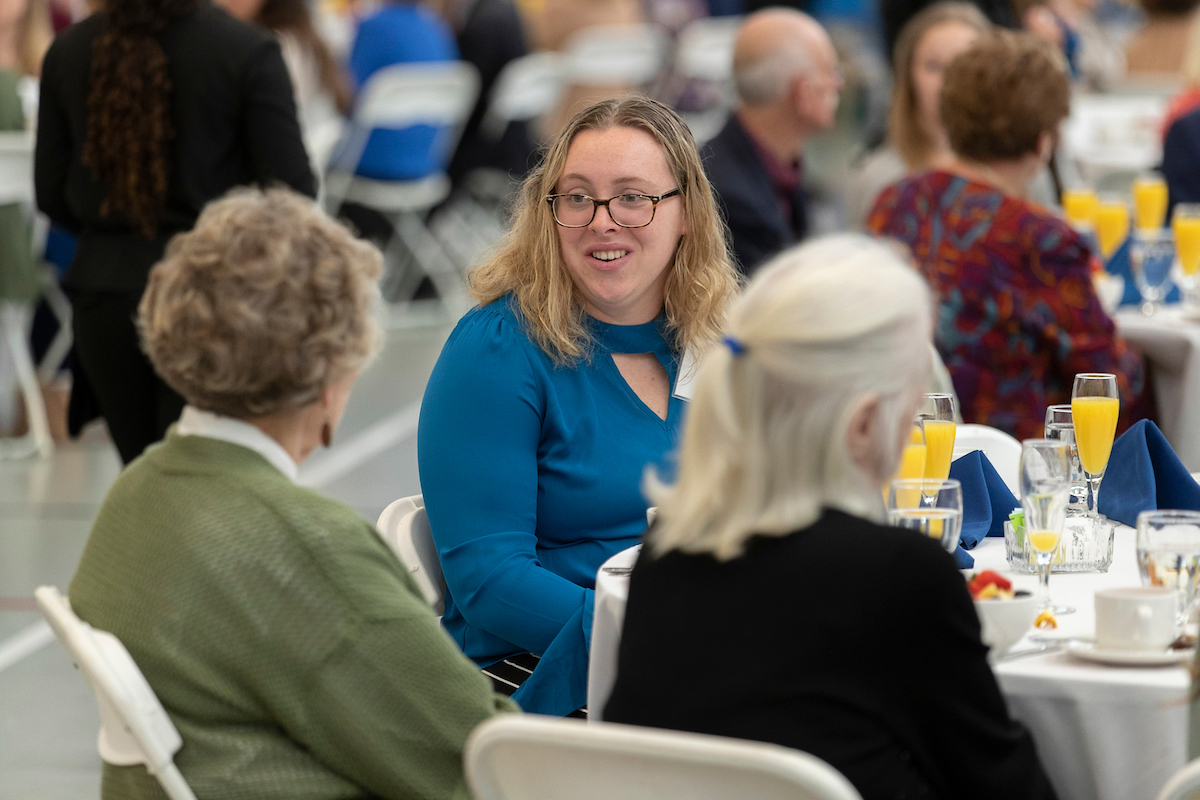 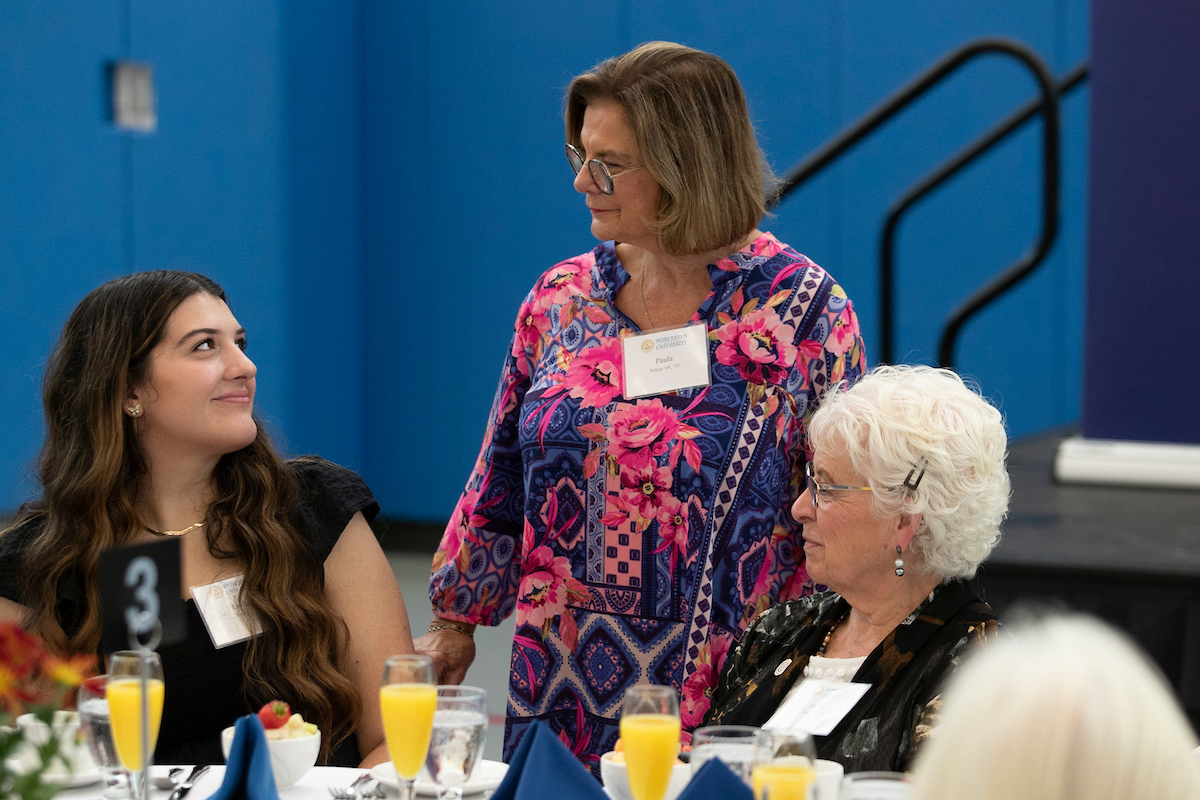 Each year the Worcester State Foundation awards more than 400 scholarships, most of them established by alumni, friends of the university, faculty and staff. This year, 22 new scholarships were established.

“Many of the donors who have established scholarships over the years have done so because they too were provided with opportunities as students and have never forgotten the impact of someone’s kindness,” said Vice President of University Advancement Thomas McNamara ‘94 in his opening remarks at this year’s breakfast. “Seeing you all together here today galvanizes the idea that as a family and a community, we rise by lifting others.”

Senior health education major Katie Puumala had never applied for a scholarship until this year. She was thrilled – and surprised – when she learned she was awarded the Dr. Maureen C. Stefanini, Class of 1958 Endowed Scholarship. The $1,000 scholarship, she said, is going to help pay for her classes.

“This is my first scholarship,” she said. “I was excited to come here.”

Senior Erin Gallella, a point guard on the women’s basketball team, learned about how when Jo-Anne Cronin ’64, M.Ed. ’68 went to Worcester State, she wasn’t allowed to play basketball. Gallella is the recipient of this year’s The Neil and Jo-Anne Cronin Endowed Scholarship and the pair chatted about how far things have come for women in college athletics.

“They didn’t have girl’s basketball back then,” she told Gallella. “They said your body isn’t that developed. You are much too delicate.”

The brunch was the first university event for International graduate student Catherine Omenge, who is from Kenya and received the Worcester State Graduate School Scholarship. “It’s special to be here, and is so nice to meet and mingle with the undergraduates,” she said. “This is really important to help with school fees. I am very excited and surprised to have received a scholarship.”

Donors Richard and Janice Spector had the opportunity to talk with their student scholarship recipient about the scholarship’s namesake, Richard’s father Robert M. Spector, J.D., Ph.D.. Dr. Spector taught at Worcester State University for 45 years, and led a remarkable life that included a legal practice, humanitarian work, civic involvement, and support for the arts. Richard went on to earn bachelor’s and master’s degrees at Worcester State.

“Richard was talking to them about how he came here as a little boy with his father,” Janice said. “We want the students to understand who Robert Spector was. He was very special.”

For senior biology major Nicole Penney, recipient of the Class of 2016 Scholarship, the scholarship meant a lot, “It means there are people around me who see my potential, believe in me, and are willing to invest in my future.” 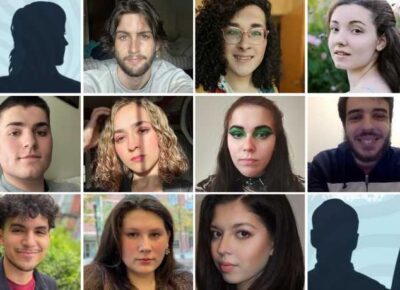 Raucous show offers comedy and a thriller, drag performance and romance, and so much more with production that runs November 17 - 20  Worcester State University’s Visual and Performing Arts . . .