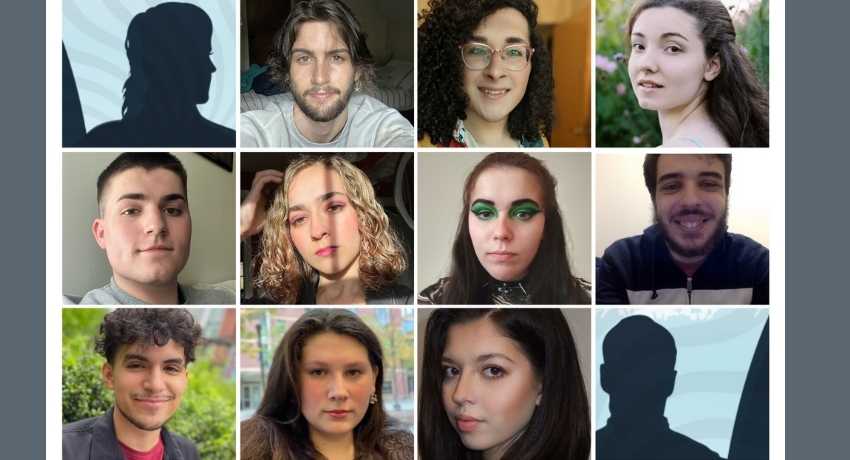 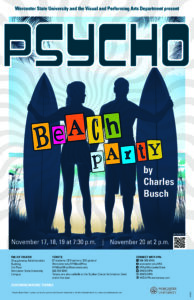 Raucous show offers comedy and a thriller, drag performance and romance, and so much more with production that runs November 17 – 20

Worcester State University’s Visual and Performing Arts (VPA) Department opens “Psycho Beach Party,” a zany spoof on 1960s teenage beach movies by Charles Busch, at 7:30 p.m. on Thursday, Nov. 17 in Fuller Theater, located on the second floor of the Administration Building. The show continues at 7:30 p.m. on Friday, Nov. 18 and Saturday, Nov. 19, and concludes with a 2 p.m. matinee on Saturday, Nov. 20.

In the play that first premiered on July 20, 1987 at The Players Theatre in New York City, there are surf bums, teenage girls, a movie star, drag performances, and more hilarious characters delivering comedy, romance, and thrilling psychological suspense – all in 90 minutes. The production offers a raucous spin on beach films featuring nostalgic characters including Gidget, Frankie, and Annette through the work of Charles Busch, a brilliant actor, writer, and drag performer celebrated for these camp-style performances.

“When you work on one of Busch’s shows, in some ways – because he’s so wickedly funny – you’re just along for the ride,” said Worcester State Theatre Director and Professor Adam Zahler. “Along the way he’s turning old notions of sexuality on their heads and poking fun at who we think we are. But in the end, we’re in for a good time and a good laugh.”

In the play, Chicklet, a teenage girl aching to blossom, wants to learn to surf. Will she convince Kanaka, the surfer king, to teach her? Will her friendship with her nerdy best friend, Berdine, survive? Will her mother ground her? Will she be consumed by her multiple personality disorder? Or will one of her alter egos stop at nothing on her way to the path of world domination?

The show comes on the heels of Worcester State’s launch of a new Bachelor of Arts in Theatre last year. The degree program immerses students in a 39-credit program of study that includes an extensive variety of theatre courses, performances, and other hands-on, lab-based experiences with productions such as “Psycho Beach Party.”

“Psycho Beach Party” is presented by arrangement with Concord Theatricals on behalf of Samuel French, Inc. of www.concordtheatricals.com.

Tickets are $7 for students, $10 for seniors, and $15 for general admission. To purchase tickets online for Worcester State Theatre’s presentation of “Psycho Beach Party,” visit worcester.edu/VPABoxOffice. To purchase tickets in person, visit the Worcester State Student Center Information Desk or contact the VPA Box Office at 508-929-8843 or VPABoxOffice@worcester.edu. Tickets will also be available at the door. 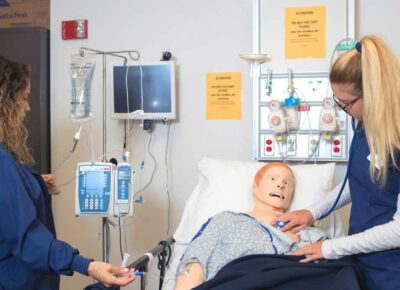 RegisteredNursing.org, a nursing advocacy program, has released its 2023 list of best nursing programs in the Commonwealth and has ranked Worcester State's Lillian R. Goodman Department of Nursing in . . .