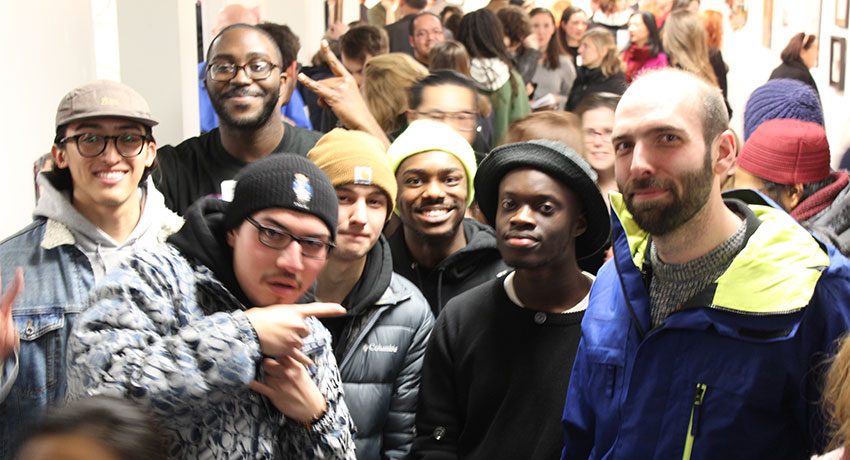 The work of eight student artists from Worcester State paints a picture of talent at the 15th annual College Show currently running at ArtsWorcester, the premier community-based arts venue in the city.

The students were encouraged to enter by Worcester State faculty as a way to up their gallery game and see what students from other programs are doing, Catherine Wilcox-Titus, director of the Mary Cosgrove Dolphin Gallery, said at the college-show opening reception on Friday, Feb, 1.

“We have our own campus gallery and it’s a very good one,” she said. “But all galleries have their own different personalities, and it’s always good for students to see their work up on the wall, which is a very different experience from working away in your little studio or your little room. On the wall, maybe you see all its flaws, but that’s good. And maybe you see that it stands up really well, too.”

Being accepted into the college show can be a big confidence booster for students just starting their art careers. Senior George Annan entered some of his photographs after being encouraged to do so by faculty members.  “I didn’t really know what to expect,” Annan said. Then two of his photos were juried into the show. “When I found out, I was so excited. It was just a really good feeling.”

Students who participate in the show often tell Juliet Feibel, ArtsWorcester’s executive director, that they enjoyed the experience. “They learn about meeting standards and about presenting their work professionally,” Feibel said. “It can be the first step in a career as a professional artist, providing initial experience and the student’s first exhibition credential. It also introduces us to the next generation of regional artists, many of whom continue exhibiting with us after graduation.”

Laurel Feinberg, Wilcox-Titus’ assistant at the Cosgrove Gallery, takes art courses on campus when she can fit them in. “I’m just thrilled when there’s a class I can take. The gallery’s open Tuesday through Saturday, so I can only take classes if they’re Monday, or at night, or in the summer,” she said.  A recent painting class she took with Michael Hachey (VPA) resulted in a beautiful acrylic on canvas abstract painting that was accepted into the show.

“I wanted to feel as if I’m a beginning-ish artist, and I thought this is a great opportunity to force myself to get out there, but I never thought I would get in,” Feinberg said. “Only 33 percent of submitters got chosen, so I’m really excited.”

Colin Plante, a history major, took his first art class last year, a watercolor course taught by Amaryllis Siniossoglou (VPA). “I was surprised at how fast the time went by in that class,” he said. “You just sit down, and it’s the fastest three hours of the week. I really enjoyed doing it.”

He was surprised again when the painting he submitted to the ArtsWorcester show made the cut. “She (Siniossoglou) told me she thought it was good and that I should to apply to the show,” Plante said. “I’m like, ‘Okay,’ and I did, and they liked it, so that was really great.”

Plante, at age 46, is a non-traditional student. He plans to teach history after his retirement as a lineman for Verizon, but art will likely be in the picture for him as well. “It’s something I’ve always wanted to do,” he said. “But when I was younger and raising my family, I had no time for it. Now I do.”

The Aurora Gallery is open from noon to 4 p.m. Wednesdays through Saturdays, and by appointment. Exhibits are free and open to the public.

To read more about our photography students’ participation in this show, check out this associated story with a photo gallery. 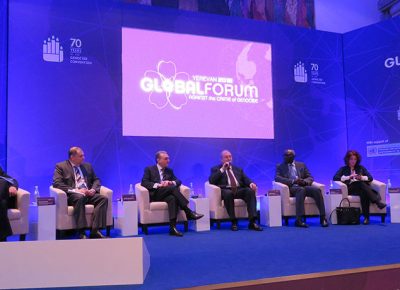 About once every three years, a genocide occurs somewhere in the world. Henry C. Theriault, Ph.D., associate vice president of academic affairs at Worcester State University, is among scholars aiming . . .