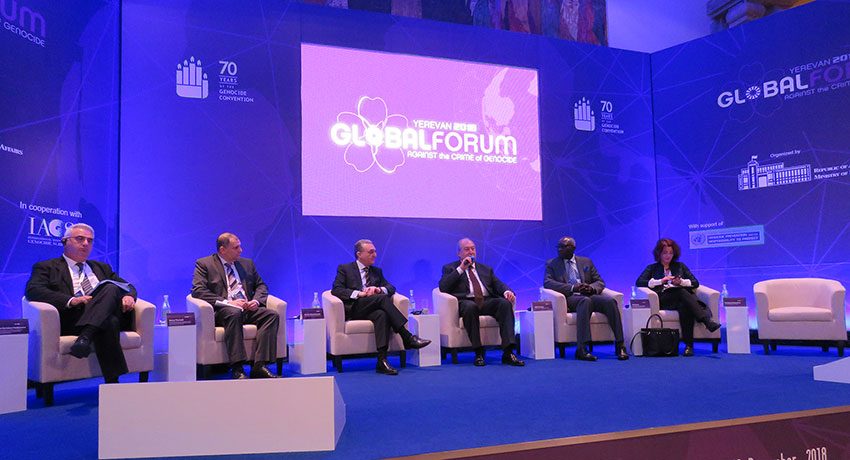 About once every three years, a genocide occurs somewhere in the world. Henry C. Theriault, Ph.D., associate vice president of academic affairs at Worcester State University, is among scholars aiming to curtail that murderous cycle.

To that end, Theriault recently attended the third annual Global Forum Against the Crime of Genocide, hosted Dec. 9 to 11 by the government of Armenia. He shared the stage at the forum with international dignitaries, including Armen Sarkissian, president of the Republic of Armenia; Zohrab Mnatsakanyan, Armenia’s minister of foreign affairs; and Adama Dieng, a Senegalese jurist who serves as a U.N. under secretary-general and the secretary general’s special advisor for genocide prevention.

Theriault is president of the International Association of Genocide Scholars, a global organization whose members study genocide history and prevention. The organization, which has about 500 members, is the co-organizer of the annual forum. He also coordinated Worcester State’s Center for the Study of Human Rights from 1999 to 2007.

The forum was held in Yerevan, Armenia, and featured more than 30 speakers addressing a range of issues on the theme of genocide education and prevention. “It was looking to the future and how do we get people to think differently about ethnic relations, race, gender relations and things like that so that we’re not continually having a cycle of genocide,” Theriault says. “Every three years we have the next case that comes up, and we’re looking at ways to try to prevent that.”

Armenia decided to play host to the annual forum after its foreign ministry made a commitment to genocide prevention because of past Armenian atrocities. “They want to make sure other groups don’t experience that in the future, which I thought was very principled,” Theriault says.

More than 1.5 million Armenians were killed at the hands of the Ottoman Turks between 1915 and 1917 in a genocide that has yet to be officially acknowledged by Turkey. Some historians put the death toll considerably higher.

Because of that troubled history, the Armenian Foreign Ministry has worked very closely with the United Nations on genocide issues, including recently introducing a successful resolution that marks Dec. 9 as an international day of remembrance for all victims of genocide. The date was chosen for historical reasons. “This December 9th was the 70th anniversary of the original General Assembly approval of the Genocide Convention, which outlawed genocide for the first time,” Theriault says.

In his opening speech at the forum, Theriault asked that, before the end of the conference, each attendee reach out and forge a connection with another group or individual to develop some kind of project for working against genocide as a way to translate the academic side into a more concrete relationship.

Following his own advice, Theriault is working on developing a program with the Johannesburg Holocaust and Genocide Museum in South Africa, which is not a museum in the typical sense.

“They do all sorts of social programs and really impressive educational initiatives,” Theriault says. “I haven’t talked any specifics with them, but I said, ‘Is there a way we can start talking about doing joint projects and connecting.’”

The South African museum had a dynamic speaker at the forum who explained a lot of the practical programs the museum is involved with, Theriault says. “One of the most noteworthy to me is they actually did a program with girls who had been enslaved by Boko Haram [the radical Islamist group in Nigeria] to help them through the traumatic process by teaching them about other cases of mass violence and doing all these other great programs with them. So I thought they would be a great organization for Worcester State to get involved with,” he says.

The WSU-South Africa connection also resonated with Theriault because of the university’s prior affiliation with the late Dennis Brutus, a South African poet and human rights activist who was jailed several times by the Afrikaner government, including once with Nelson Mandela. He sought asylum in the United States in the early 1980s.

A Worcester State faculty member, the late Merrill Goldwyn, advocated for the university to award Brutus an honorary doctorate to assist him in his asylum quest, since a return to South Africa was almost guaranteed to lead to his death. He was eventually granted asylum and, twice in the early 2000’s, served year-long stints as poet in residence at WSU and taught a course on literature and human rights.

Theriault says he also had encouraging conversations at the forum with Under Secretary Dieng who, prior to his appointment to the U.N. in 2012, had served as registrar of the International Criminal Tribunal for Rwanda. “I’m going to be following up with him about different possibilities of connecting with the U.N.,” he says. “What I would hope for is maybe some avenue for internships. That office is not well funded, but the good side of that is, if we place people in internships, that office can probably use the support.” 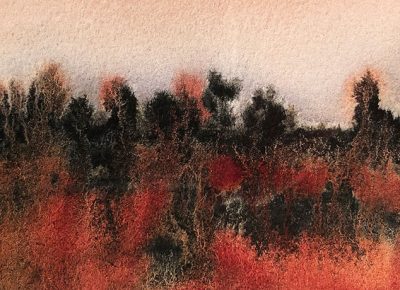 Professor Amaryllis Siniossoglou of Worcester State’s Visual and Performing Arts Department displayed her art pieces in numerous exhibits worldwide in the past year. From December 2017 to . . .