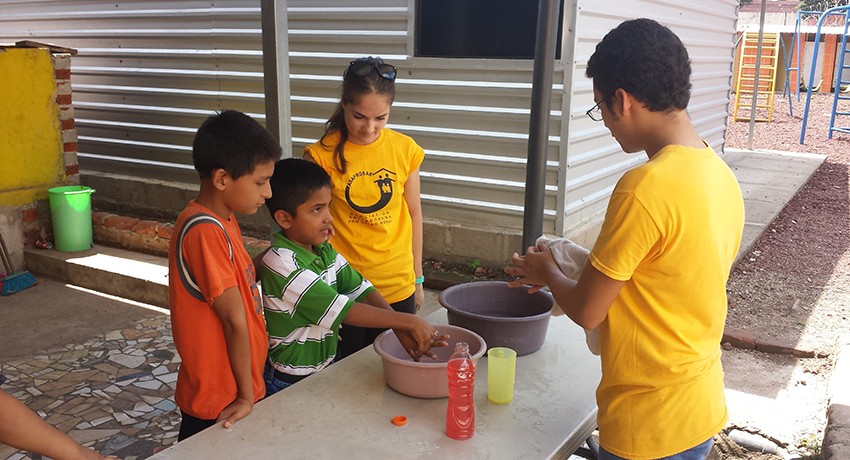 A group of Worcester State nursing and public health students traveled to a rural area of El Salvador in May to help deliver health care to its impoverished residents and saw firsthand the challenges they face every day.

This was the second year nursing instructors Maryann Sabetti-Gramajo and Judy Tuori led a group of students to the small, mountainous country situated on the coast of the Pacific Ocean and between Guatemala and Honduras. While the trip is designed to introduce students to a global public-health setting, it also is about learning to be a respectful community partner.

Students supported the work of Asociación Salvadoreña Pro-Salud Rural, The Salvadoran Association for Rural Health (ASAPROSAR), which has operated in the rural, isolated areas of El Salvador since 1972. They worked within the priorities set by the host country and side by side with local health workers.

ASAPROSAR’s founder and director, Vicky Guzman, M.D., has delivered medical attention and health care to rural El Salvadorans by working with local campesino leaders she trained to be health promoters. She has done so in spite of government surveillance and being imprisoned during the country’s civil war, all of which is documented in her book, From the Ground Up: Building Healthy Communities Together, which the students read prior to the trip.

The students’ daily tasks included registering patients to be seen in the clinic, assisting with health screenings, and teaching self-breast exams. They also interacted with the children, playing with them as well as teaching them about the importance of handwashing and brushing their teeth.

The conditions in which the El Salvadorans live made the biggest impression on Barron. “They work so hard, but don’t have the means for the services that they need,” she says. “I feel like they deserve so much more than they have.”

For junior nursing major Melissa Fuentes, it was “eye-opening to see what health care is like in other countries.”

She was impressed by the women who sought their services “when it was provided on certain days and times, even though they had to walk or take the bus quite a long distance. Many brought their children with them, and there were a few men as well.”

“When we were out in the community helping, everyone was waiting patiently to be seen and seemed very grateful,” she says.

Junior nursing major Katy Dumas, who took a similar trip to Haiti in high school, went along to “gain more knowledge about the public health in foreign countries and practice my nursing skills I’ve learned so far as a nursing student. I also wanted to be able to make a difference in someone’s life, and do something bigger than myself.”

The biggest surprise for Dumas was the lack of knowledge about health. “The common person does not know very much about what is good for their health and why it is important to maintain their health,” she says.

Observing eye surgery at the ASAPROSAR eye clinic was her most memorable experience. “It was very interesting to see such a delicate surgery and compare their procedures to how surgeons do surgery in America,” Dumas says.

The group also worked to bring new water filters to several communities and collaborated with the Heifer Project International to bring chickens and goats to several families trained to use them for their own families and to then pass on offspring to other families in the future.

They also saw how an environmental disaster causes a public-health crisis, Sabetti-Gramajo notes. Shortly before the group arrived, there was an explosion in a Santa Ana sugar refinery that processes molasses. It occurred within the only 3 percent land held in conservation. In addition, water used to irrigate the adjacent farmland as well as the waterways were contaminated, killing fish and wildlife and making any use of the water by the community impossible.

“The students were actually able to see the aftermath with their own eyes, and it brought home our previous discussions of the social and physical determinants of health that affect public-health outcomes,” she says. “Hopefully, they will be able to share this experience in their respective academic classes in the fall.”

For students who go on the trip in March of 2017, there will be a related course in the spring that not only covers the range of social determinants and public-health outcomes, but also El Salvadoran history, culture, and political and social factors, Sabetti-Gramajo says. “Global service learning really needs to integrate both the academic and experience together for optimal understanding.” 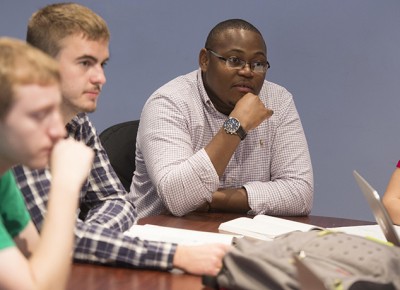 Senior Jean-Philippe Matondo, a citizen of the Democratic Republic of the Congo, brings his global perspective to Worcester State, offering a diversity of thought on a campus where 95 percent of the . . .