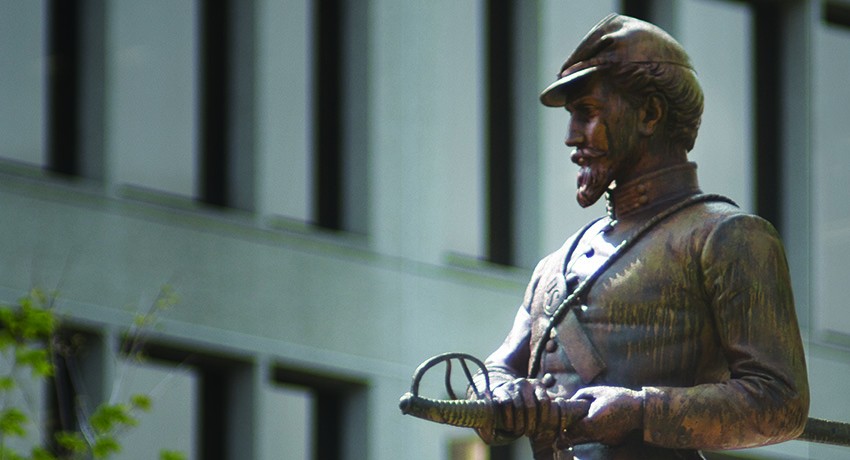 The Soldiers’ and Sailors’ Memorial honors 398 Worcester residents who perished in the U.S. Civil War with just their names. Thanks to Worcester State history students and a few volunteers, each of their stories is now known.

They spent the spring semester researching the men’s time as Union soldiers, taking copious notes, and writing their biographies. The biographies—as well as many associated portraits—are published in a book that shares the saying on the Soldiers’ and Sailors’ Memorial, “For the Unity of the Republic: The Men of the Worcester’s Soldiers’ Monument,” which was produced by Worcester State’s Publications and Printing Services Office.

Although publication of the biographies comes one year after the nation commemorated the 150th anniversary of the devastating four-year conflict that left more than 1.1 million Union and Confederate soldiers dead, the idea for it arose last year as plans for the monument’s restoration neared completion and planning for its re-dedication began.

The city’s Grand Army of the Republic Memorial Hall Board of Trustees thought it would be nice to have biographies of all the fallen soldiers whose names are engraved on the monument, explains Linda Hixon, an adjunct professor of history at WSU who is a trustee.

Once in a Historian’s Lifetime

Hixon saw it as an opportunity for Worcester State’s history students to hone their research and writing skills. The result was a one-time class aptly named The Civil War Biography Project.

“This was a once-in-a-historian’s-lifetime kind of thing,” Hixon says. “The students went above and beyond on their biographies. We’ve kind of given these men their stories back.”

The sense of urgency that surrounded the class was a compelling reason for some students to sign up. In all, 11 undergraduate students, two WSU graduate history students, four volunteers, and Hixon worked on the project.

“This is a project for the city of Worcester. Our services were required for a product that they needed,” notes Marc Speroni, who earned a bachelor’s degree in history in May. “That really brought this project out of the classroom and into the workings of history as a profession.”

The project was daunting because of the number of soldiers and the unpredictable nature of historical research. “Every man got a biography. Some have only a few sentences, and for others, we could write a book,” Hixon says.

“It was tricky finding some of the soldiers,” she adds. “The immigrants, in particular. You’re not going to find any census data on them.”

The students and volunteers were able to break through this and other research barriers thanks, in part, to the WSU Library’s subscription to Fold3.com, which Library Executive Director Matt Bejune secured for the class.

When overcoming those barriers seemed impossible, Hixon turned to graduate student Zach Washburn. “I’m a researcher. I love research, so I thought this project was awesome. I love finding things that are hard to find,” he says.

“Some of the soldiers’ names were wrong (on the monument), but Zach tried different spellings, and we ended up finding all of them,” Hixon adds.

By researching the lives and deaths of these soldiers—poring over letters home as well as service records—the students gained a better understanding of many defining aspects of the war and American society in the 1860s.

In addition to tracing the battles they fought and died in, a significant number of the soldiers were captured and died in Confederate prisoner-of-war camps, Hixon says. “Many of them died in Andersonville. Zach is doing more research on this,” she adds.

In the case of immigrant soldiers, they either were conscripted when they arrived in Worcester or paid to be substitutes by more entrenched Worcester residents, Hixon explains.

More than a Name

“There were soldiers that we fell in love with,” she says.

For instance, Charles F. Everett made an impression on Hixon. His record says he was 18 when he died, but by looking at his soldier’s portrait, he was clearly younger—possibly 13 or 14 years old. He was a drummer boy and was killed in the Battle of the Wilderness. “Even though he was told to stay behind with the wagon, he joined in the fighting. It was a bloodbath,” Hixon says.

Washburn found the story of Lieutenant Edwin Coe of the 57th Massachusetts Infantry particularly interesting. In accounts from his fellow soldiers, Coe dreamed the night before the charge at Petersburg that he would die from a musket shot in the head. In spite of this, he led his regiment into the battle, only to be fatally struck in the head by a musket.

The research on Coe also turned up stories published in Honolulu, Hawaii media about how Coe’s battle sword ended up in the hands of a Honolulu jewelry store owner. The store owner has since sold it to the Petersburg National Battlefield. Coe is buried in the cemetery there.

The soldier’s story that has resonated the most with graduate student Laura Sutter is that of Lieutenant Samuel M. Bowman, also of the 57th Massachusetts Infantry. “His death came unexpectedly while he was writing a letter to his betrothed and an enemy mortar shell exploded at his feet,” she says. “Bowman, along with many of the other heroes I researched, was a young man who enlisted voluntarily because he believed the preservation of our country was paramount to his own life.”

Brooks is memorable because his military records, especially his record of death, are very detailed. “This amount of detail wasn’t easily found on the majority of military records that I looked at,” O’Neil says. On the other hand, she was unable to find a death record for Freeman. The last trace of him is a record showing “he was declared missing in action at the Battle of the Wilderness.”

Speroni has two favorites: the Rev. Samuel Souther and Clarke Robinson. Souther led a life of community service, so it was understandable that he would enlist to be a chaplain who counseled soldiers. “His joining during the final months of the war, only to be killed in his first battle at the Wilderness, Virginia, shows his true commitment to community,” Speroni says.

Robinson’s story also was tragic. In 1864, he learned that his mother was terminally ill, so he pleaded to his commanding officers to give him a furlough to go see her at her home in Vermont. The officers drew up documents granting the furlough, “but before the documents could be signed, Clarke died at the Siege of Petersburg,” Speroni explains.

In addition to humanizing all 398 soldiers, the project deepened the students’ connection to Worcester State, not to mention Civil War history.

“This project has made me greatly appreciate my education here at WSU,” O’Neill says. “I already had a great appreciation for the professors here, but this was an invaluable experience that I would not have been a part of if it wasn’t for them. I am very grateful that I had the opportunity to be a part of this project.”

Sutter echoes that sentiment. “Working on this project has put the Civil War in a new perspective for me, and I hope that those who read these stories will gain a new respect for the sacrifices these men made,” she says.

Hixon, who earned her bachelor’s degree in English and master’s degree in history from Worcester State, planned to have a copies of “For the Unity of the Republic: The Men of the Worcester’s Soldiers’ Monument” available for dignitaries who attend the re-dedication on the city Common on Saturday, July 16. A copy will be kept at the WSU Library, and the GAR board purchased copies to donate to the Worcester Public Library and libraries in all of the city’s schools. Plans for wider distribution are still in the works.

Hixon’s son, Tristan, was instrumental in getting the book ready for publication. In designing the book, he laid out all the biographies and histories and edited around 130 images, most of which are in the final book, and took the cover photo and some of the newer images of the monument in the front of the book.

The restored monument was rededicated 142 years after it was first erected on the Common—almost to the exact day, according to Dan McAuliffe, chair of the GAR board.

A fife and drum band, dignitaries from the city and state, members of the Sons of Union Veterans, youth groups, and descendants of some of the soldiers listed on the monument gathered at Mechanics Hall and walked to the monument site. A Civil War band played prior to the ceremony, and an encampment of Civil War re-enactors was set up with cannon firing, period food, and a tin-type photographer.

For information on ordering copies of “For the Unity of the Republic: The Men of the Worcester’s Soldiers’ Monument,” contact Hixon at lhixon@worcester.edu. 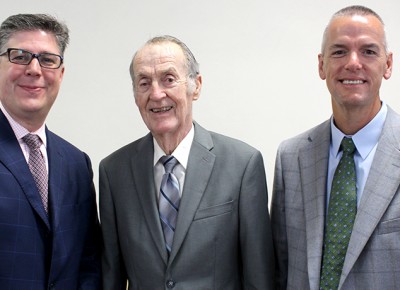