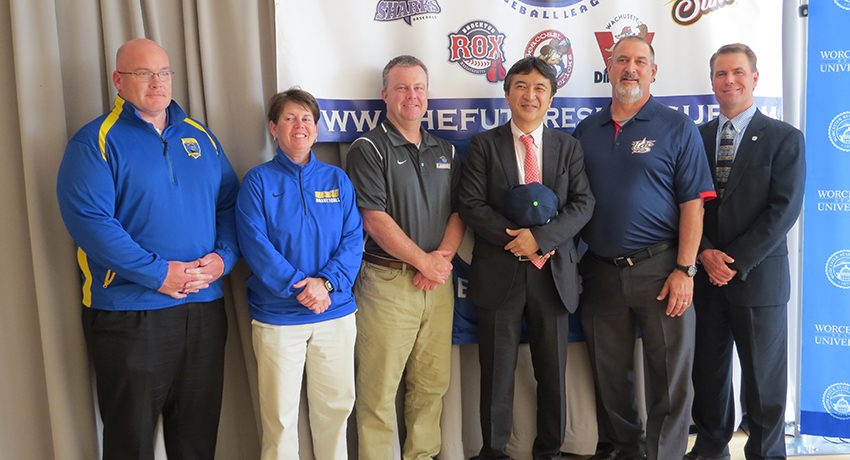 At a May 31 press conference held in the Wellness Center at Worcester State University (WSU), the Futures Collegiate Baseball League (FCBL) announced plans to host the collegiate national teams from the United States and Japan this July at three of the League’s ballparks. The teams will be housed on campus.

The 41st USA versus Japan Collegiate All-Star Series will be staged in Worcester, Mass., Brockton, Mass. and Nashua, N.H. while the teams are visiting New England July 11 through July 17. Before taking on Japan, the U.S. National Team will first play the FCBL Prospect team in an exhibition matchup on July 11 at Hanover Insurance Park at Fitton Field in Worcester, home of the Worcester Bravehearts.

USA and Japan will then play on July 13 in Worcester, on July 14 at Campanelli Stadium in Brockton, home of the Rox, and at the end of July at historic Holman Stadium, home of the Silver Knights, in Nashua.

“The opportunity to be able to host such great talent in our ballparks is amazing,” said Futures League Commissioner Chris Hall. “Our fans will truly get to experience the future of baseball from a national and international perspective.

“The Collegiate National Team is still one of our most recognizable programs, as USA Baseball grows each and every year,” said Collegiate National Team General Manager Eric Campbell, who traveled from North Carolina to attend the announcement. “Led by John Savage at UCLA, the 2017 team will represent the very best of collegiate baseball and will be filled with future household names.”

Worcester State University is an official sponsor of this New England tour and will serve as the headquarters for both teams during their visit.

“Any time Worcester State University can support an initiative that will economically benefit the city, we are proud to partner,” says WSU President Barry M. Maloney. “In this case there is the added benefit that international residents bring to the campus experience. We look forward to hosting our visitors.”

Several speakers noted that the teams were extremely happy with the Worcester State accommodations, and pleased that they would be able to stay in a “village” atmosphere, where they can work out and eat together.

“It gives us a chance to showcase our facilities to some of the best baseball players in the world,” said Worcester State Athletic Director Michael Mudd. “They will use our batting cages, baseball fields, and training centers.”

Timothy Murray, president and CEO of the Worcester Regional Chamber of Commerce, served as master of ceremonies for the announcement. He pointed out that one of the main reasons the teams decided to locate in Worcester is because of the 38,000 students who attend college at one of nine colleges in the city.

Yasuchi Nakamura, deputy consul general of Japan, donned a Bravehearts baseball cap. He said, “USA has always been a place of dream for Japanese baseball players,” and, he added, with a smile, that it will help continue the “ever closer enmity between our two nations.”

Nakamura was referring the highly competitive nature of the international collegiate baseball rivalry. Speakers noted that the final game of the series typically determines the victor, and that last year in Japan, they took the title in the tenth inning. 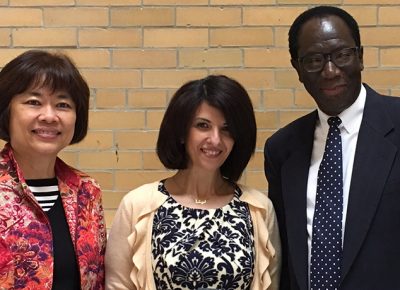 Alumna Honored by State Universities as an Outstanding Educator

Worcester State University alumna Renah Razzaq, a teacher at Doherty Memorial High School and WSU adjunct professor of mathematics, was recently honored by the State Universities of Massachusetts as . . .