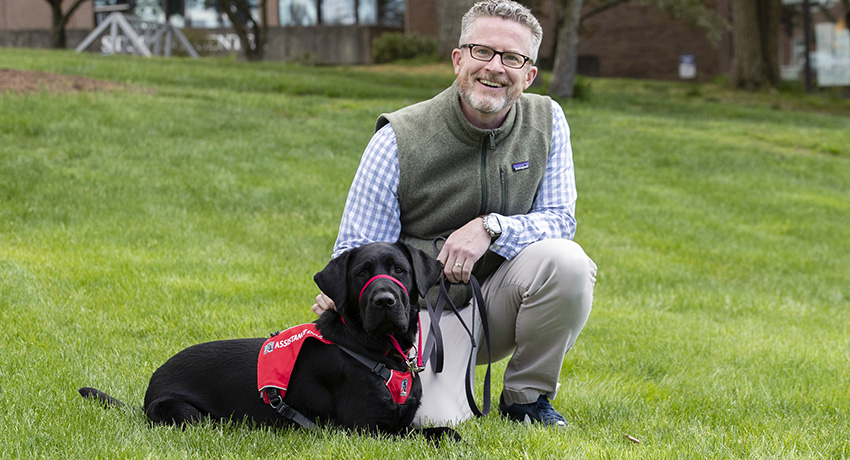 A new worker at the Counseling Center is getting rave reviews after only a month on the job, even if he occasionally falls asleep under his boss’s desk. MK Fenlon’s easy-going demeanor is purposeful—the result of careful breeding and years of training—and essential to his role as the Counseling Center’s first assistance dog, introduced to the campus as a creative way to meet the growing mental health needs of Worcester State students.

“The number of students we’ve been seeing over the past four years has increased so much that individual talk therapy alone isn’t sustainable,” says Assistant Director of Counseling Services Kevin Fenlon. Investigating the use of an assistance dog was the result of asking, “How do we find creative ways to get more students some kind of therapeutic intervention?”

Fenlon—MK’s owner, handler, and constant companion on and off the job—worked with NEADS, a national service and assistance dog breeding and training organization in Princeton, Mass., which has raised and trained more than 1,900 dogs since its founding in 1976. After submitting an application and passing an initial three-hour screening interview, Fenlon was matched with MK, a 2-year-old black lab who is considered a “one for many” assistance dog, rather than a service dog that is trained to help a single individual.

“Our dogs are purpose bred, either by ourselves or another service dog organization,” says Katy Ostroff, manager of client services at NEADS. Throughout the 12- to 18-month training process, the dogs are evaluated on their strengths to determine which role would be best for them. More social dogs like MK work well in group situations because “their heart lies in greeting the world,” she says.

Usually that early training happens within the prison system—a program paused during the pandemic—with inmates working with the dogs during the week, and volunteers taking over on weekends to socialize the dogs and expose them to a world full of crowds and other distractions.

Critical to a successful pairing is matching the strengths and personality of the animal with the right handler, role, and lifestyle, says Ostroff. That perfect match can take months to find, depending on the dogs ready for placement and the needs of the clients ready to accept them. And because the dog becomes part of the client’s family, the initial interview includes a deep dive into the applicant’s personal life.

“When he goes home, and I take off his gear, he’s a family dog,” says Fenlon, so his wife and four sons, ages 9 to 15, were an important part of the discussion.

Surprisingly, MK and Fenlon matched quickly. During the initial interview, MK was the “demo dog,” one that is typically still in training but available during a prospective client interview to demonstrate the capabilities of assistance and service dogs. Fenlon says he was drawn to MK’s calm demeanor, soft eyes, and soulful look when he rested his large head on his lap—a response to the command “visit.”

“I remember thinking, when I went home afterward and I was talking with my wife, I wish I could take that dog. He was unbelievable. But you have to set that hope aside because it could take up to two years to actually have a match,” says Fenlon, who was overjoyed when he was notified that MK would be placed with him.

The consummate professional on the job, MK becomes a rambunctious, high-energy dog when his working vest comes off at the end of the day, perfect for the Fenlon family.

“We have a loud house, not for the faint of heart. There’s always some kind of activity. When you tell him ‘free time,’ that releases him to play and there’s a visual change in him. He’s an awesome, athletic, play-with-me kind of dog. We didn’t need a calm, quiet, submissive dog.”

Before he introduced MK to the family, Fenlon was required to stay on the NEADS campus for over a week to bond with MK and learn how to execute the more than 50 commands MK has been taught. Even though he is not a personal service dog, MK was trained to perform all the same skills—he can turn a light on and off, open doors, turn the pages of a book, and retrieve a tissue box. He only barks on command, and will “do his business” exactly where instructed.

Fenlon says he is hyper vigilant about keeping MK healthy—no table scraps or other unhealthy treats, and his weight is carefully monitored so he can lead the longest and healthiest life possible. In addition, MK needs at least 40 minutes of exercise and play time throughout the day so he can remain calm and focused in work mode.

On the job, MK follows Fenlon’s schedule, lying under the desk or asleep in the corner until he is needed. Students who come in for therapy with Fenlon can decide on the level of interaction—MK might just sit at a student’s feet for occasional pats, lie across a lap like a weighted blanket, or just serve as an ice breaker by demonstrating one of his many skills.

Exactly how MK will be integrated into the Counseling Center’s therapeutic interventions remains a work in progress. “The goal is to serve students in some different ways. If he can see a group of 10 students for an hour, that’s 10 times what I can do. We know just spending time with dogs releases chemicals in the brain. There’s going to be some education of what he’s capable of,” he says.

To be clear, MK is Fenlon’s personal responsibility—he pays for all food, veterinary care, and other costs associated with owning a dog. When MK is deemed too old to continue working, he will retire as the Fenlons’ full-time family pet. And if Fenlon leaves Worcester State for another job, MK goes with him. NEADS doesn’t charge clients, but Fenlon will attempt to raise at least $8,000 over two years to help support the organization’s work. [To help in his fundraising effort, visit: support.neads.org/MKevin]

While having a full-time assistance dog on a college campus may seem unusual, NEADS reports 54 percent of their assistance dogs are working with a teacher, religious leader, or therapist.

“Students who might not think to come to our office might because of him. Next school year will be a learning experience to see what works best,” says Fenlon. 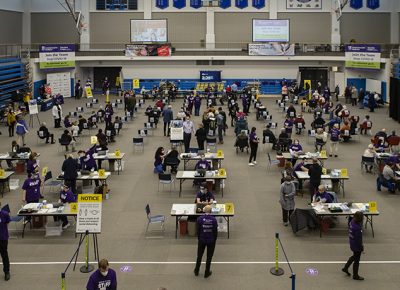