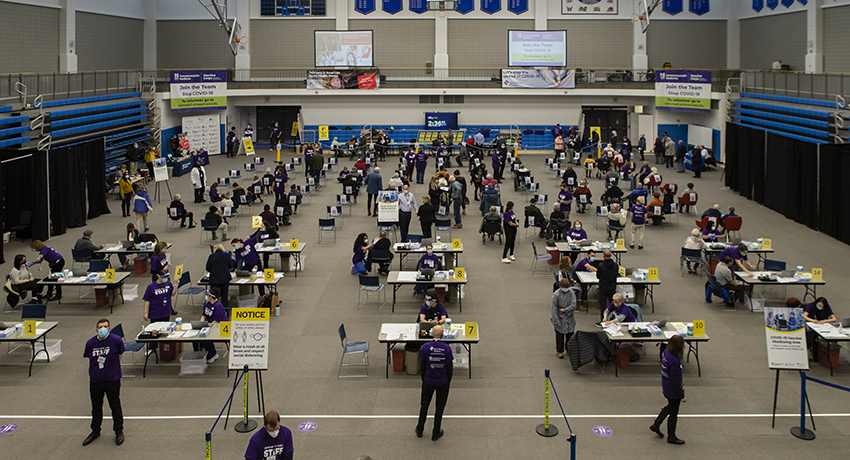 The large-scale vaccination site in Worcester State’s Wellness Center will close on Thursday, June 10, after clinic staff administered more than 83,000 COVID-19 vaccines in almost four months. Vaccinations will continue on Monday, June 7, from 4 p.m. to 8 p.m., and on Thursday, June 10, from 1 p.m. to 4 p.m. First and second doses of the Pfizer vaccine will be available, but those getting a first dose will need to go to a different location for their second dose in early July.

The clinic was a collaboration among Saint Vincent Hospital, Worcester State University, University of Massachusetts Medical School, and the city of Worcester.

“We were happy to have been a community partner in this public health emergency with UMass Medical School and Saint Vincent Hospital,” said President Barry M. Maloney. “Our Competition Gym, which would otherwise be utilized by students if it were not for the pandemic, became a learning opportunity for our student nurses, faculty, and numerous Worcester State volunteers that stepped up to serve the needs of Worcester’s seniors, diverse populations, and others in the surrounding communities.”

“This collaboration to deliver so many vaccines in such a short period of time in Central Massachusetts has been critical to rapidly reducing the spread of COVID-19 and helping to enable the current stage of reopening,” said Carolyn Jackson, chief executive officer of Saint Vincent Hospital. “We are delighted to have worked with such terrific partners to bring this important service to our community.”

More than 7,200 volunteers, including any from Worcester State’s community, contributed 25,000 hours of their time to make the clinic a reality.

“I am so grateful for the volunteers who joined the Vaccine Corps and dedicated their time to the clinic,” said Commonwealth Medicine Executive Vice Chancellor Lisa Colombo ’82. “They are the heart and soul of this operation. Their strength and resilience are a true testament to the power of partnership that we will count on as we continue to vaccinate more individuals in Massachusetts.”

“The regional vaccination site at Worcester State University has been a terrific asset for the city of Worcester and our efforts to get shots into the arms of as many folks as possible,” City Manager Edward M. Augustus, Jr. said. “I am greatly appreciative of the efforts of Saint Vincent Hospital, Worcester State University and Commonwealth Medicine in bringing that site online and operating it for more than three months.”

The Conference and Event Services Office provided logistical support, including breaking down the entire operation each Saturday night and reconstructing the operation every Monday night, a process that took eight people three hours. 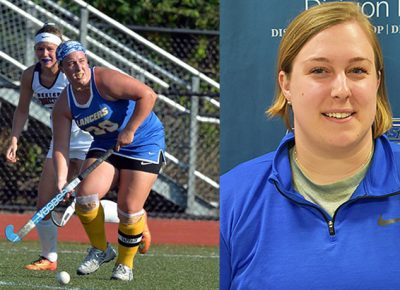 Hayley Sutherland ’18 has been named the head coach of the Lancer field hockey program. Sutherland replaces head coach Alexa Carlson, who elected to step down to focus on her family and . . .