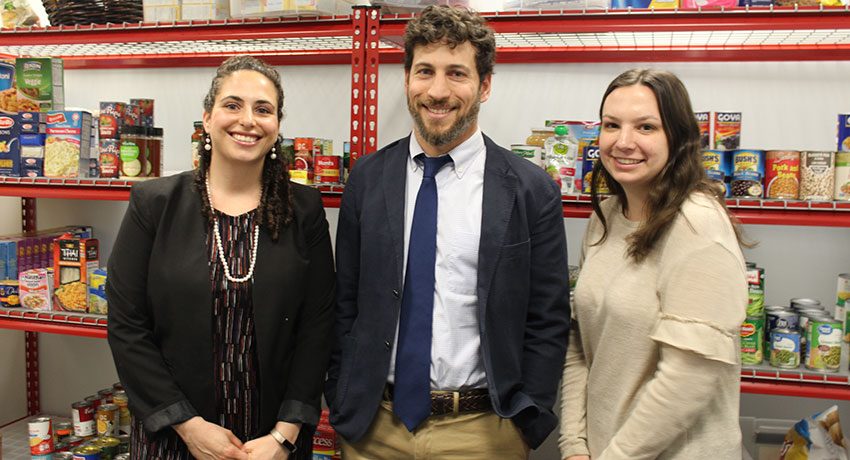 When Serena Jaskolka ’20 was a freshman, she didn’t think students could create real change on campus. “I just kind of thought if you were unhappy with something you just had to put up with it for four years, graduate, and get out,” she said.

That idea shifted after she signed up for the SNAP practicum, simply because she needed a one-credit course and it fit into her schedule. In that course, taught by Adam Saltsman, Urban Action Institute executive director and assistant professor of urban studies, she connected with the Hunger Outreach Team, which helps students and others in need sign up for food stamps, among other anti-hunger efforts.

“The Hunger Outreach Team really opened my eyes to the power that students hold here on the campus and our ability that we have to make real change by collaborating with those around us,” she said. Jaskolka’s passion for anti-hunger work grew from that inadvertently fortuitous beginning to include becoming an integral part of a group of students working to open a food pantry on campus.

After two years of persistent advocacy, a food pantry was officially opened on the third floor of the Student Center with a ribbon cutting ceremony on Tuesday, April 9.  It is called Thea’s Pantry, to honor of the legacy of Thea Aschkenase, who died March 23 at the age of 95. Aschkenase graduated with a degree in Urban Studies in 2007 when she was in her early 80s, and penned her memoir, Remembering: A Holocaust Survivor Shares Her Life, at the age of 92.

Hunger was something Aschkenase knew only too well. Her whole family, except her mother and her, died in Auschwitz at the hands of the Nazis. “Despite feeling hungry every day and never knowing if they would make it to the next day, they survived,” President Barry M. Maloney said, at the ribbon cutting ceremony. “That one who has borne so much found it within herself to give back to others, helping the hungry, educating school children about the Holocaust, and writing her memoirs, is inspiring to all of us.”

Thea’s Pantry will be open from 1 to 7 p.m. on Tuesdays and Wednesdays in Room 345 in the Student Center and is available to anyone with a WSU One Card. The pantry was a student-driven initiative, Saltsman said. “It wasn’t really on our agenda or lists of things to do, but all these students had come to us and they described that, anecdotally, it was clear that there was a need for such a pantry on campus.”

As a first step, Saltsman and UAI staff assistant Joanne Jaber Gauvin suggested that the students go out and collect data to assess whether food insecurity—a lack of access to affordable, nutritious food—was a real problem on campus.

“We often say that college kids get by on ramen and, well, isn’t that just part of the college experience?” Saltsman said. “No, in fact. Surviving on ramen is not really getting an adequate nutritional diet. You’re hungry, you’re not concentrating, and all this is well documented in the literature.”

A study was conducted on the Worcester State campus of graduate and undergraduate students that found that about a third of the student body experiences either moderate or very strong levels of insecurity. “So, that was an alarm to us and it signaled that the anecdotal evidence that they were coming to us with was real and that we had a real problem on our campus,” he said.

Food insecurity is a problem college campuses nationwide are struggling with, but one that Jaskolka had not been familiar with until after she signed up for that single-credit course.

“With the rising cost of higher education, it really isn’t shocking that so many of our students are struggling with food security. When I first heard it, I was surprised but not in the manner that it was unbelievable, but because I’d never heard it before,” she said. “If 33 percent of my fellow students aren’t eating regularly, like, how have I not noticed this? And how come I haven’t heard about it, and how come nobody I personally know is doing anything about it? So that really motivated me to get more involved.”

Getting Thea’s Pantry off the ground was a sustained, collaborative effort among student organizations and many different departments all over campus. “By opening Thea’s Pantry we’ve created a safe, stigma-free resource where students of all ages can receive support they need while bettering themselves through education,” Jaskolka said. “As a pantry staff member, I’ve seen traditional students, nontraditional students, elder students, the dad who’s just trying to better himself and support his family at the same time. It really is serving the entire community.”

Fran Langille, a former Worcester State staffer who worked closely with Aschkenase on many anti-hunger initiatives, spoke of the positive impact Aschenase’s indomitable spirit had on all who knew her. Fighting back tears because of the still-recent death of her friend, Langille noted how Aschenase had her first pajama party in her 80s during a girlfriends’ getaway, an opportunity she did not have as a teenager experiencing the horrors of war.

“Even after all she had been through, Aschenase evinced an abiding spirit of gratitude, a quality of character that can make us mindful of the many things in our lives we sometimes take for granted,” Maloney said.

“I know that I’m constantly reminded, with all the successes that go on here with the wonderful students and faculty that we have at this institution, that we want to see each one of our students be successful,” he said. “I think Thea’s legacy reminds us that it’s possible—that it’s possible to be a lifelong learner, it’s possible to forget and move on beyond really, really horrific things in one’s life to create success, but that we should remember also to help someone else out along the way.” 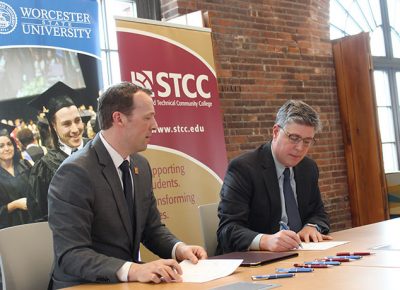