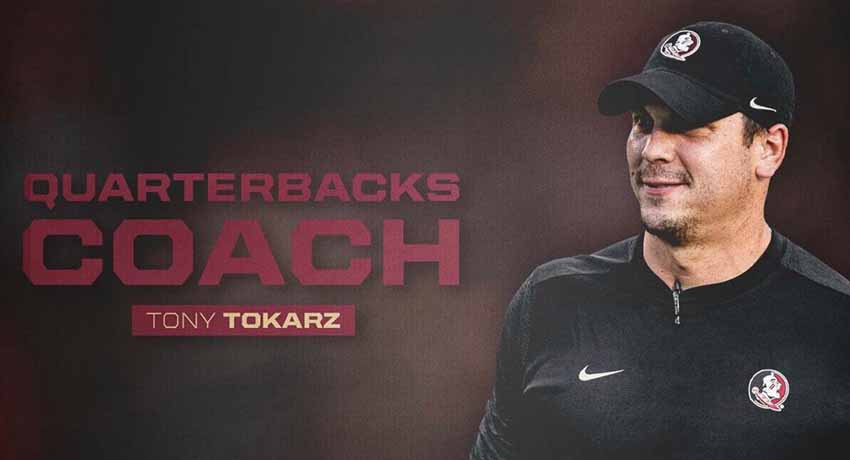 Tokarz was a three-year starting quarterback at Worcester State and left as the program’s all-time leader in rushing yards by a quarterback while also ranking third in career touchdown passes (46) and fifth in career passing yards (4,604). He was a first-team All-Conference performer in 2011 when he led the Lancers to an 8-3 record, the program’s most wins since 2003, and an appearance in the ECAC Northwest Bowl to cap his senior season.

In the opening game of the 2011 season, Tokarz tied a program record with five touchdown passes as the Lancers won 55-30 over Anna Maria, the program where Tokarz would begin his coaching career one year later.

“I am thankful to Coach Norvell for this opportunity and appreciative for the chance to work with the tremendous student-athletes we have here at Florida State,” Tokarz said. “Playing quarterback in college was a fantastic experience for me, and I am looking forward to making sure our quarterbacks have those same fond memories from their playing career. We will prioritize continuous development on and off the field, becoming better football players and tremendous young men in the process of our climb.”

“Coach Tokarz has been a valuable member of my staff for many years, and I am happy he will take on a larger role with our program,” Norvell said. “He is a relentless worker who is extremely smart. He has tremendous knowledge of our offense as well as the quarterback position as both a player and a coach. He will develop our quarterbacks on the field with attention to detail and continue to build on their individual skillsets. His teaching style will also help them develop off the field with an importance on leadership in the classroom and in the community.”

Tokarz, who has been FSU’s senior analyst on offense the past two seasons, has 11 years of collegiate coaching experience. He has been on Norvell’s staff for the last five years and, in addition to his time coaching quarterbacks, also has experience coaching wide receivers and tight ends.

Tokarz spent three seasons at Memphis with Norvell, serving as tight ends coach in 2019 after spending the 2017 and 2018 seasons as a graduate assistant. The 2019 team won a school-record 12 games and the program’s first outright conference championship since 1969. The Tigers ranked eighth in the nation with an average of 40.5 points per game and with an average of 6.90 yards per play. Their team passing efficiency of 167.41 and average of 14.91 yards per completion were both 10th in the country.

The 2017 team averaged 45.5 points per game, the second-highest average in the country, and ranked fourth in the NCAA with 523.1 yards per game and 7.35 yards per play. The team passing efficiency rating of 160.15 was sixth in the nation, and their average of 335.0 passing yards per game ranked seventh.

Tokarz then moved to Stonehill College, where he coached wide receivers and worked with quarterbacks in 2013. That year, the Skyhawks posted their best record since 1996 and earned a share of the regular-season conference championship for the first time in program history. Wide receiver Nate Robitaille broke Stonehill single-season records with 91 receptions, 1,229 receiving yards and an average of 8.3 receptions per game while tying the single-season record with 13 receiving touchdowns.

Tokarz spent the 2014 and 2015 seasons at Memphis, working with the quarterbacks in 2015 and secondary in 2014. In 2015, the Tigers won nine games behind an offense that ranked 11th in the country in scoring and eighth in third-down conversion percentage. Tokarz worked with Paxton Lynch, who was a first-team All-AAC honoree as well as a finalist for the Manning Award and Johnny Unitas Golden Arm Award after breaking program records for passing yards, passing touchdowns and 300-yard passing games. He ranked 11th in the nation in passing efficiency, 12th in completion percentage, 16th in passing yards and 19th in passing touchdowns. Lynch went on to be selected 26th overall in the first round of the 2016 NFL Draft by the Denver Broncos.

The 2014 team won 10 games, the program’s most in a regular season since 1963, and earned a share of the AAC conference championship. The defense ranked third nationally in Red Zone defense and ranked ninth in the country in total takeaways. Memphis also was third in the conference and top-25 nationally in scoring defense, rushing defense, passing efficiency defense, third-down defense, interceptions and fumble recoveries.

In 2016, he returned to Stonehill College as the passing game coordinator, quarterbacks coach and recruiting coordinator. That season, freshman Andrew Jamiel matched Robitaille’s single-season program record with 91 receptions and broke the receptions-per-game record with an NCAA Division II-best 9.1 catches per game. He also twice broke Robitaille’s single-game receptions record by posting 16 receptions in week two before breaking his mark with 18 catches for 169 yards and two touchdowns five weeks later in the Division II Football Showcase. Jamiel was named the conference’s Rookie of the Year, Stonehill’s first offensive player to earn conference rookie of the year honors, and headlined three all-conference selections on offense for the Skyhawks.

Tokarz earned his bachelor’s degree in history from Worcester State in 2012. He is married to the former Emily Williams. 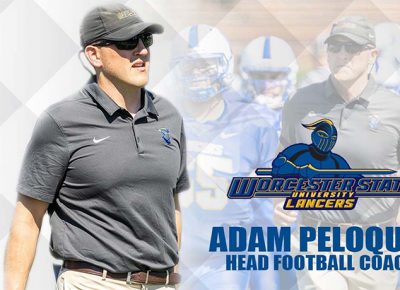 After two years as the interim head coach, Adam Peloquin ’12 will be hired as the next head coach of the Worcester State University football team. Peloquin has been with the program since 2011, . . .