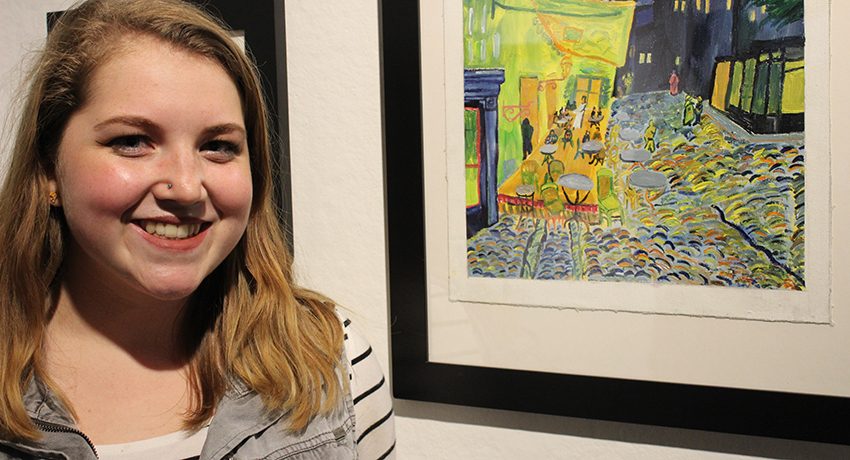 From Trash to van Gogh, Students’ Art Reflects Their Inspirations

“It shows that our students are very creative and very resourceful,” gallery director Catherine Wilcox-Titus, associate professor of visual and performing art, said at the exhibition’s opening reception Oct. 19. Students are challenged to use materials that are not especially costly or difficult to handle. Metal casting isn’t done in the classes for example, and students use acrylics and watercolor instead of solvent heavy oil paints.

“They’re not getting fussy, expensive materials and we can’t really do the toxic fumes and stuff in our studios, so I think our students, within the limitations of what they have at their disposal, are extremely inventive. It also shows that our studio faculty are very good at coaxing the very best out of these students,” Wilcox-Titus said.

Those gentle nudges help students overcome a feeling of intimidation many of them initially have around the idea of making art. “A lot of students think ‘Oh, I can’t draw. I can’t do a studio course,’ but they come to our classes and our studio faculty are very good at guiding them along and nurturing them and getting some fantastic results from these projects,” she said.

There are beginning and advanced students showing work in the exhibition, which is open to anyone who had taken a studio art class. They don’t have to be majors in the Visual and Performing Arts Department or have a concentration in art.

Rylee Donovan, a psychology major, exhibited her version of a painting by Vincent van Gogh, “Café Terrace at Night.” The assignment had been to choose an artist then recreate their work, learning from the artist’s approach and techniques.

“I fell in love with this painting because of all the colors in it and all the textures in the cobblestones and in the sky.” She found following in the artistic footsteps of a master was no easy task, however.

“It’s really hard,” she said. “I tried to get all the details of it but it can’t be perfect. It can’t be van Gogh.” Nevertheless, she received many compliments from classmates and her teacher on her engaging take on the painting, which she jazzed up a bit from the original.

“I brightened the colors a little more but it still keeps the essence of it,” she said. “I just love his work and I’m inspired by him, personally. He went through a lot of mental illness and stuff like that so, as a psychology major, his story really hits home with me.”

Nicole Mongeau decided to put on the dog for the show. Her piece, a watercolor titled “Corgis on Fleet,” was a study of symmetry in which a repetitive pattern of corgis done with a Sailor-Moon-like Japanese animation flair, made for a pleasing design.

“It was a lot of fun,” Mongeau said. “My older sister is a fine arts major so I’m used to seeing really high quality art, so actually I’m really proud of this one.”

The exhibition gave her a chance to show her creation off. “It’s really nice for people to actually see it and appreciate what you did and the creativity involved,” she said.

George Annan, a junior, has a series of three photographs in the exhibition, one of a billboard in Manhattan; then the front half of a mail truck shot from the side; and, finally, a pile of trash bags of various colors sitting on someone’s front stairs. Annan finds a subtle significance in these lowly objects and manages to convey that special vision in his photos.

“I’ll notice something subtle and it’s just everyday stuff that maybe you would walk by but, if it speaks to me, I’ll just take a picture of it,” he said.
Annan is just 23 but calls himself a “late bloomer” because he didn’t take up photography until he was 19, and even then he did it mainly just to keep up with friends who were into it. “I kind of picked up their hobby, but as the years went on, I grew more and more of a passion for it,” he said.

So much so that very little escapes his artist’s eye, even that pile of trash bags. “I shot this in Allston,” he said. “I like to take the train in to see friends and hang out and then I’ll wake up super early in the morning and just spend the whole day taking pictures.”

Is he planning on going pro some day? “I’m going to school for business and my minor is education but in a perfect dream world, I’d want to shoot full time,” he said.

Student Vanessa Chaves had a hanging sculpture on display, an artfully contorted burgundy and beige cylinder perhaps two feet in length, made of yarn and jute-like strips. She made it in a class taught by Stacey Parker, associate professor of visual and performing arts, called “Driftwood to Dumpsters,” which focuses on using recycled materials.

“It was the first art class I’ve taken here,” Chaves said. “It took me a long time to make it. I got maybe half way and was going to pass it in and she (Parker) was, like, ‘I want you to build it twice the size’ and I said ‘OK.’” The enlargement, which involved working rough-edged strings into the shape, took a toll on her fingers. “It was actually a little painful with the stitching and everything,” she said. “But she really liked it and likes what I’m capable of, and I had faith in her, so it was cool.”

Parker proudly pointed out work by Chaves and other students of hers at the opening reception. “They’re so creative and have so much ingenuity,” she said. “They don’t always see it in themselves. We kind of have to tease it out of them, but then when it happens and they see it, they’re like, ‘I can’t believe I could make that. I didn’t know I could do that.’

Sometimes, the road to creative success involves failure at first. “You’ve got to give them the opportunity to try it and to fail at it and then show them how to take that and do something with it,” Parker said. Those who persevere usually come up with a student-exhibition-worthy piece, she said. “They amaze me every day.” 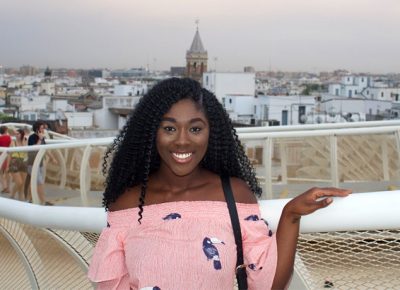 For senior Daniella Owusu, spending a semester studying in Spain wasn’t enough. She’s back there now, and is among a small percentage of Worcester State University students who study more than . . .