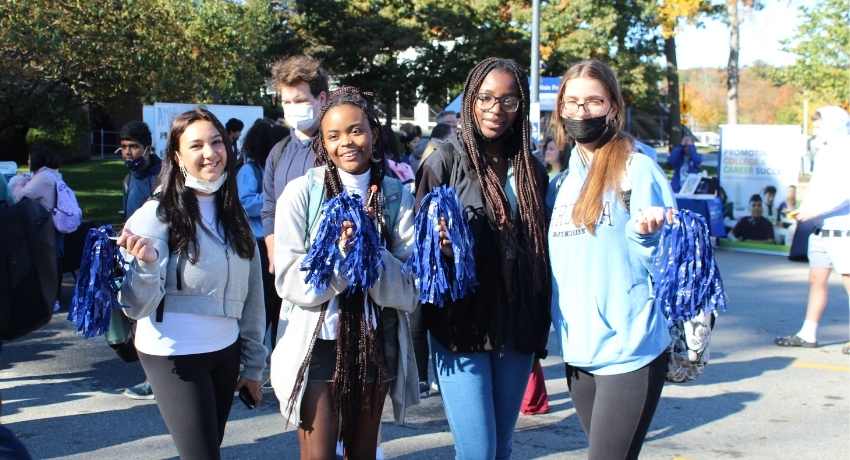 The university celebrated its first Unity Day with an historic student-led flag raising, guest speakers, and a host of festivities on October 11. Across campus, students, faculty, and staff gathered in groups small and large during a full day of programs to recognize and advance the university’s ongoing work toward greater social justice and inclusion. 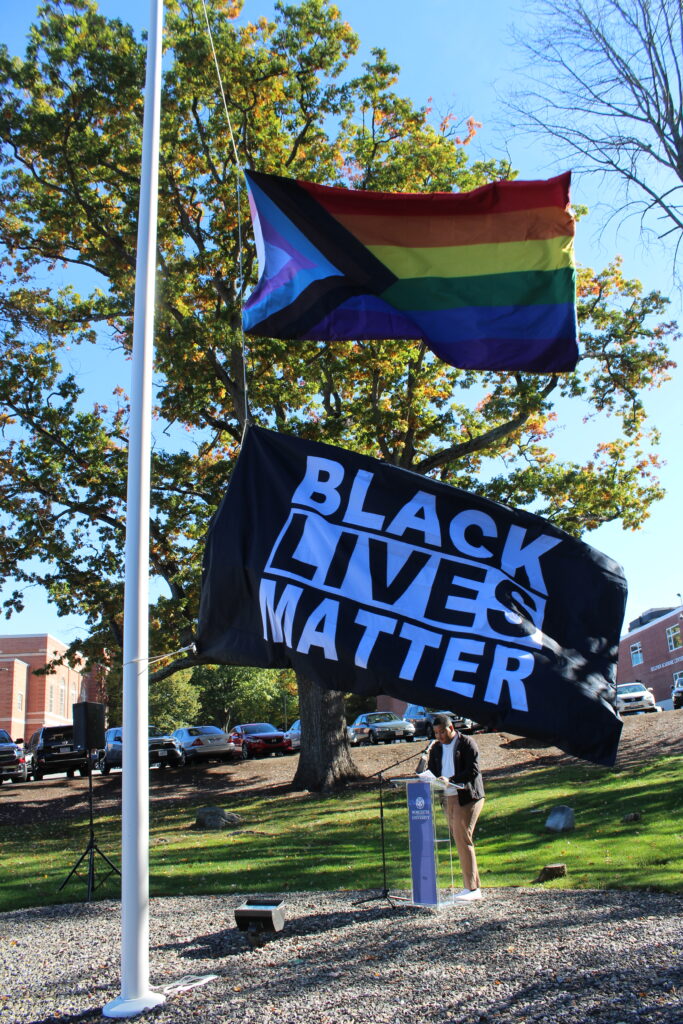 “The Black and Brown population in America and around the world has been targeted throughout history and has been going through systematic oppression and racism for decades,” said Brandol Ogando Saladin, a sophomore political science major, RA, and president of the Intercultural Student Alliance, formerly TWA. “Our country has turned its eyes away and decided to ignore the issues happening in the black and brown community for years, taking no notice of the voices of the people in the community.

“We all might come from different backgrounds, cultures, and struggles; however, we all must come together as a community to support and protect each other,” Ogando Saladin continued. “Unity and togetherness is the only way to move forward and progress.”

Biology major and President of the Black Student Union Ivy Quaye spoke of how the death of George Floyd exposed issues that have needed to be addressed for the past 400 years: police brutality, racism, unfair treatment in the workplace, unequal opportunities.

“My definition of the Black Lives Matter flag here at Worcester State stands for the constant fight for the lives of each and every person of color on campus,” Quaye said. “May it continue to serve as a reminder to all who see the fight that continuously needs to be done for people of color.”

Sophomore public health major Joselyn Figueroa said she hopes to see more activities like these in the future. “I think Black Lives Matter deserves more attention on campus. Do more relating to Juneteenth during the school year, where Juneteenth is when most are not on campus.”

The flag raising was followed by a celebration outside the Student Center featuring a DJ, dancing, games, and ice cream. Students at the event said it provided an opportunity for fun—with an important purpose.

“Unity Day is important because it’s a special day to invite people from different cultures and backgrounds to come together and share our stories,” Corey Hancock ’24 said. “It’s good to bring everybody together at one time and one event so everyone can get to know each other.”

Hancock said his sense of unity on campus increased with the recent official recognition of the Black Student Union. “I felt like there wasn’t as much unity before, but now I see more people reaching out to get others from different backgrounds involved in things, and also now we have the BSU as a club that Black people can join as a place that’s always safe and welcoming for us.”

Sarah Semerzier ’23 said Unity Day is important because people of color are still a minority on campus and need events that foster a campus-wide sense of community. “Unity Day is an event that includes everyone, so everyone feels like there is a place for them,” she said. “It just gives people a day to get to know each other and get to know who else is on this campus besides their friends and the people they see in class.”

Esther Konadu ’22 said she has seen an improvement in terms of diversity and inclusion on campus since her undergraduate days. “When I started everyone just kind of stuck with their people and didn’t really intermingle as much but now people seem to want to reach out more and see who else is there besides their own little social group,” she said. “People seem more open and like they want everyone to be involved in their club and events.”

Events like Unity Day that promote diversity help make the campus more reflective of the larger community, she said. “It’s more representative of the people in the city as well because Worcester is so diverse,” said Konadu, who is of Ghanaian heritage, one of the largest immigrant groups in Worcester. “It makes it a school that represents not only us as Ghanaians but also people of all different immigrant groups that are coming here and choosing to be here in this city, which just makes the school a lot better. The city outside the gates is a melting pot of cultures so why shouldn’t the school be?”

Unity Day, said IELI student Marcus Santiago, is “a good way to gather people and talk about inclusion. Some students don’t speak English well. This helps gather everyone together.”

Unity Day began with a Unity Walk from the May Street Building to the Common Ground outside the Student Center.

Sophomore public health major Adam Luskey, who came out for afternoon activities, said, “Unity Day is a beautiful day that brings us together, where we can all appreciate our races and genders. I like that everyone is inclusive here, there are people who stand up for others.”

Faculty and staff members also reflected during Unity Day. “Unity Day is a way for members of the WSU campus to recognize and celebrate each other’s differences. Those differences are what make us unique as a university,” said Edgar Moros, director of the Intensive English Language Institute.

“I think Unity Day is a significant step forward for WSU, one that works to acknowledge that unity does not mean assimilation—it isn’t about the erasure of our differences, but rather a fierce acknowledgment of the value, the richness, the significance of the ways in which our life experiences vary,” said Riley McGuire, assistant professor of English. McGuire led the Uplifting LGBTQ+ Voices panel during the day’s lunchtime sessions.

“I’m glad we’re having this event,” he said, “but I don’t think unity is something we can uncritically celebrate. Instead, it’s something we can commit to aspiring to: to having conversations, implementing practices, and redistributing resources in ways that promote a more equitable campus. In short, unity is work, it’s a work-in-progress—work that those of us who inhabit various categories of social privilege, such as myself, need to be doing. I think Unity Day is an important part of a much larger process of reflection and change.”

Among the day’s sessions, Kirsh Donis, associate director of undergraduate admissions, led a conversation about the World Cup, the influence of immigrant communities in increasing soccer’s popularity in the U.S., and the way the sport unifies individuals from all backgrounds. “It’s great that the university has made the commitment to dedicate a day of programming to showcase the diversity here on our campus,” Donis said. “Diversity comes in different formats in which the day of events will showcase how inclusive our campus is, and I hope this will be an annual event.” 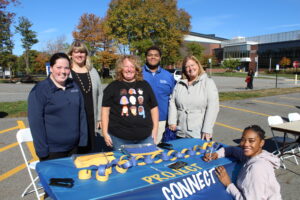 A panel titled Uplifting LGBTQ+ Voices showcased the talents of LGBTQ+ students and alumni and facilitated an open discussion about how to best support all gender identities and sexual orientations across campus. More than 20 people gathered in the Sheehan Multipurpose Room at noon to hear insights around LGBTQ+ culture and community at Worcester State and beyond from three panelists: visual and performing arts major Delaney DeNorscia ’25, English major Anthony Drapos ’23, and alum Micah Wolfgang ’21. The panelists also debuted original writing about their experiences realizing and celebrating their queer identities.

“Events like this are crucial for community building at WSU,” said Riley McGuire, the panel facilitator. “We want to celebrate the power and specificity of LGBTQ+ perspectives, while also underscoring the crucial importance of thinking about equity and inclusion from an intersectional vantage point.”

Concurrently, nearly twenty students, faculty, and staff gathered in the Student Center’s Foster Room for the In Our Shoes panel, which highlighted the experiences of students with disabilities. Elementary education major Christena Mena ’24, who lost her lower legs in a train accident and now uses a wheelchair, shared several poems that addressed the pain of being othered and underestimated and the power of her own dreams and determination. Rachel Sinclair ’23, a liberal studies major, and moderator Michael Kelley ’22 shared their experiences with invisible disabilities.

Fran Manocchio, assistant dean of Student Affairs and director of Student Accessibility Services, was glad the panelists could “share the realities of navigating opportunities and barriers that most nondisabled people do not even consider. It’s so important to value all of our differences, and disabled students are central to building a vibrant, respectful, and kind campus community.”

Urban Studies Professor Shiko Gathuo, who facilitated a conversation with adult learners and graduate students, described the session as “an important indication of the commitment that the university has toward ensuring that all students are an integral part of the Worcester State University community. Many graduate students take evening classes and often have full-time jobs and family responsibilities. It is difficult for them to participate in university programming outside the classroom, which might make them feel like they exist on the periphery. Unity Day is a recommitment, by the university, to bring everyone who makes up our community into the fold.” 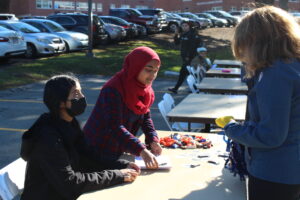 In the evening about 15 students gathered for Embracing Our Differences, a paint night experience sponsored by Residence Life. Senior sociology major Sarah Semerzier said she feels that the inclusion and diversity on campus is “getting better. COVID has helped people to realize they feel the same way and helped bring people together. With more time, it feels like inclusiveness will improve…. Unity means inclusion and togetherness, and everyone coming together to understand our differences.”

Unity Day planning was led by Chief Diversity & Equity Officer Maria Isabel Gariepy and Assistant Director Omarthan Clarke, who lead the University’s Office of Diversity, Inclusion, and Equal Opportunity. The office will be doing a survey to collect feedback from the campus community about this year’s event as it begins to plan for the next Unity Day.

“From my perspective I think it was a great success,” said Clarke. “The energy that was there was true. It was new, so you could see people trying to navigate in this new context. It could be interpreted as a montage, but I think that’s a major aspect of unity. You don’t always know what to expect or what you will bump into, but we know why we are here. We are here to bring awareness to our connections; we hope to walk away a little more empowered or informed. We consistently received reports from those who did participate—when asked if they feel like they learned something new about someone else, the answer is yes. That’s what marks it as a great success for me.”

Another mark of Unity Day’s success, Gariepy said, was how groups from across the campus came together voluntarily to lead the planning, programming, and logistics. “From student leaders to employees across every division, this kind of leadership, initiative, and action truly speaks to the commitment to DEIJ [diversity, equity, inclusion, and justice] from across our campus community and a desire to ensure we have a climate where all can thrive and where every student, faculty, staff, and community members feel like they belong and their experiences are validated.” 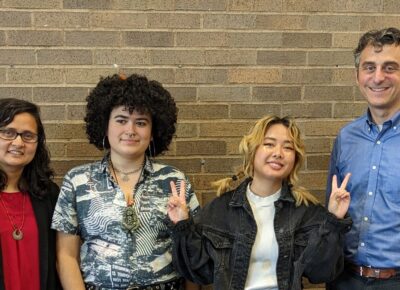 Written with Nafisa Tanjeem More than seventy students, faculty, staff, and community members attended the panel discussion, “Organize to Decolonize: How Can We Decolonize Community . . .