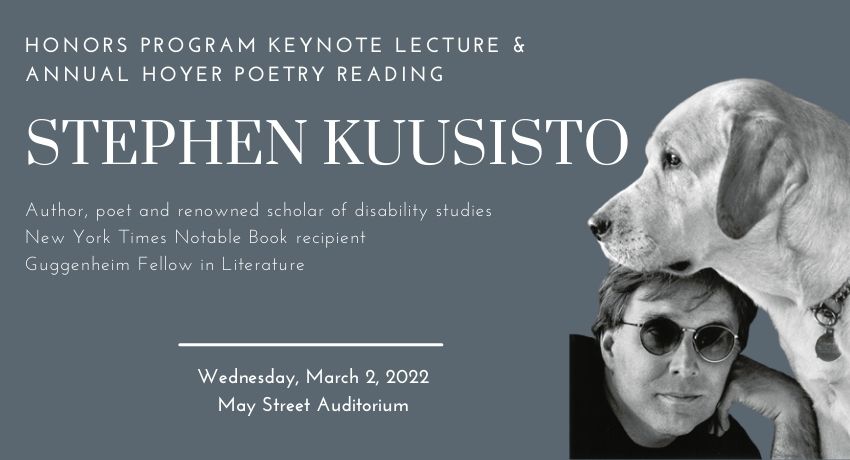 Internationally distinguished writer and scholar of disability studies Stephen Kuusisto will deliver a keynote address and a poetry reading at Worcester State University on Wednesday, March 2.

The keynote event, sponsored by the WSU Honors Program, will begin at 12:30 pm in the May Street Auditorium, followed at 3 p.m. by a poetry reading. Both events are open to the public.

The poetry reading is sponsored by Judith O’Connell Hoyer ’65, a WSU alumna who has generously supported an annual poetry reading in the English Department for the past seven years, helping to bring both emerging writers and Pulitzer Prize winners to campus and the greater Worcester community. Kuusisto’s reading will last for about 30 minutes and be followed by a moderated conversation about the writing life, habits of mind (and reading), literary publishing, and students’ questions.

“We are so excited to welcome this distinguished poet, memoirist, and teacher to WSU, and I have no doubt our campus community will benefit tremendously from his insight, wit, and wisdom as he shares some of his perspectives on disabilities, and also his craft as a writer,” said Cleve Wiese, one of the directors of the Honors Program at Worcester State.

Kuusisto, who has been blind from birth, directs the Burton Blatt Institute’s interdisciplinary programs in disability at Syracuse University where he also holds a University Professorship. Recognized by the New York Times as “a powerful writer with a musical ear for language and a gift for emotional candor,” his best-selling books include the memoir Planet of the Blind (a New York Times “Notable Book of the Year”) as well as Eavesdropping: A Memoir of Blindness and Listening and, most recently, Have Dog, Will Travel, published with Simon & Schuster.

Kuusisto is also an accomplished poet and a graduate of the famed Iowa Writers’ Workshop. His work suggests the influence of James Wright, Robert Bly, and “Deep Image” poetics, as well as echoes of  Tomas Transtromer among other Scandinavian writers. His poetry collections include Letters to Borges and Only Bread, Only Light.

In addition to his literary achievement and scholarship in disability studies, Kuusisto has advocated for the rights of the disabled throughout the world, appearing on numerous television and radio programs to include All Things Considered, PBS, the Oprah Winfrey Show, Dateline, and Talk of the Nation. His essays appear in the New York Times, Washington Post, Harper’s, and Reader’s Digest. A deeply committed educator, he is the recipient of awards from the Fulbright Program and the Guggenheim Foundation. 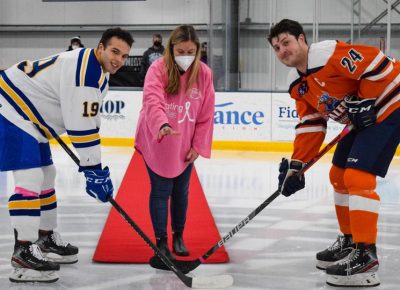 Worcester State’s men’s hockey raised money and awareness for the fight against breast cancer on Feb. 17, in its first “Skating Strides” game. The Lancers took part in "Skating Strides Against Breast Cancer" with the Pre-Health Club at Worcester State to raise money for the Ellie Fund, a local non-profit that provides essential support services for breast cancer patients. The Ellie . . .