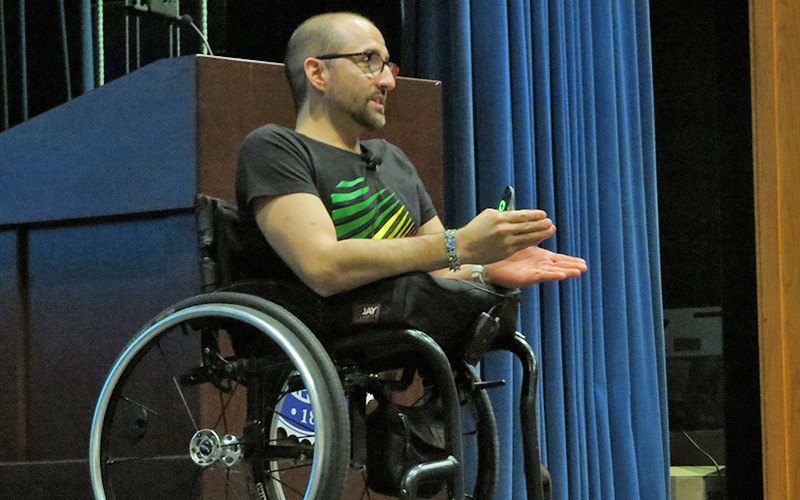 Doctors told Spencer West’s parents that their son was not going to be a functioning member of society after having his legs amputated at age five.  In 2012, that amputee reached the summit of Mount Kilimanjaro, Africa’s tallest mountain, teaching everyone that they can beat the odds.

West spoke at Worcester State University on April 7 in the Sullivan Auditorium, sharing his journey and spreading a message of social sustainability, telling us all to “Redefine Possible,” as he titled his talk.

Born with a rare condition known as sacral agenesis, West needed to have his legs amputated from the pelvis down.  This leaves West’s height at under three feet – a fact he shared by showing a humorous picture he took of himself when he met former basketball star Shaquille O’Neal.

Despite losing his legs, West has devoted much of his life to become the functioning member of society the doctors said he might never become, and then far surpassing that modest goal by achieving feats that are difficult for many able-bodied people to achieve. In high school, West led the cheerleading team to a state championship, which allowed them to finally get funding from their athletic department.

West went on to college and had a career path set up for him in Toronto, when he began to feel that he had a calling to do more in the world around him.

That program that has set up hundreds of schools in Africa, working to break the cycle of poverty using education and other sustainable practices.  Due to Adopt a Village’s efforts, more than 150,000 children around the world can receive an education on a daily basis.  The organization aims to change the world through sustainable efforts that people can use to help themselves, rather than through simple charity, especially by providing educational opportunities.

In 2012, when West climbed Mount Kilimanjaro, he raised funds for the Free the Children foundation, which is dedicated to providing sustainable water to Kenya.  In the time prior to the climb, West anticipated that he would be able to go through the climbs using both his hands and his wheelchair equally.  However, complications made it so that the climb had to be done 80 percent on his hands, and only 20 percent on his wheelchair.

There were parts that West had to be assisted by his able-bodied friends who had made the journey with him.

“That was the only time in my life I have ever wished to have legs,” said West.  “Because I wished I could have helped them like they helped me.  But in the end we did it together, we completed our journey as a team.”

West now travels the country as a motivational speaker and is a social activist for Free the Children.  He also participated in the “We Walk 4 Water” campaign in 2013 – a trek across Canada over 185 miles on his hands – to raise awareness for the need for sustainable water worldwide.

His message is one of perseverance, and he aims to spread his belief that “the only way this world can get better is if we all take responsibility to make a change.”

This story was written by senior communication major Robert White. 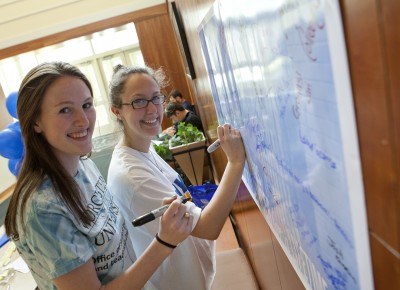 The second annual Day of Giving challenge on Wednesday, April 1, was an extraordinary success, with more than 450 donors giving a more than $150,000, far exceeding the goal of 300 gifts in a single . . .