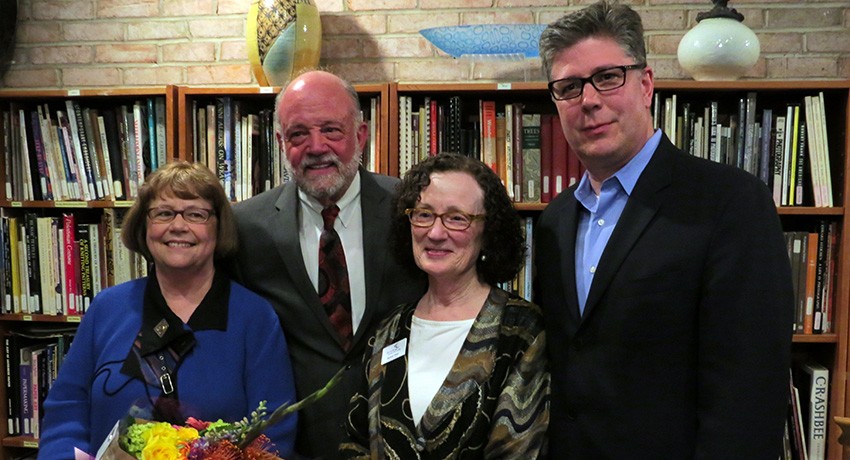 The Worcester Center for Crafts, an organization affiliated with Worcester State University, recently honored Carol and James (Jim) Donnelly of Worcester by naming its library for them to recognize their longtime support and service to the center. The dedication ceremony took place during the “30+ Faculty” show opening on Thursday, May 19.

Carol Donnelly, a professor and chair of Worcester State University Education Department, served as interim director of the Crafts Center from 2008 to 2012, thus ensuring the center’s independence while guiding the then-new partnership between Worcester State and the Crafts Center. Jim Donnelly is an attorney with Mirick, O’Connell, DeMallie & Lougee, LLP.

The Donnellys have been active community volunteers and leaders in the arts in Worcester, supporting many of the area’s prominent cultural institutions, such as the Worcester Art Museum and Higgins Armory Museum, in addition to the Crafts Center. The library dedication was made in recognition of the Donnellys’ pledging a generous gift of over $50,000 to the center.

Jim Donnelly thanked the Crafts Center and Worcester State for the honor. “Two of the most important gateways in this city are the Worcester Center for Crafts and Worcester State University, and each of them, over time, has made an immense difference to our family,” he said. “If you consider the math of this partnership, there is more than 300 years of service by these two institutions, and who could count the number of lives that have been changed?”

The Donnellys also were presented with a set of bookends created by wood artist Matthew Thomas of Shock, W.Va. “The bookends are symbolic of the library, but also represent the Donnellys’ service on one end and their philanthropy on the other, which has helped hold the Worcester Center for Crafts together,” said Hess.

The Library is a non-circulating source of inspiration for the public and for students who visit the Crafts Center, and also contains examples of ceramic and glasswork done by visiting artists. It is open Tuesday through Saturday, 10 a.m. to 5 p.m. 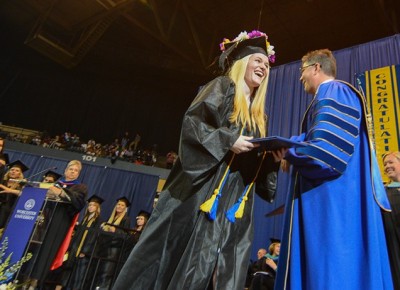 A Record Number of Undergraduates Earn Degrees at Commencement

A record 1,250 Worcester State University undergraduate students were eligible to walk across the stage of the DCU Center on Saturday, May 14 at a commencement ceremony featuring a keynote address by . . .