Worcester State University’s own Dr. Patricia A. Marshall will give testimony Wednesday, May 15 at a briefing before the U.S. Congressional TRIO Caucus in Washington, D.C. Marshall, interim associate vice president of Academic Affairs, is a tenured Spanish faculty member at Worcester State, and an alumnus of the TRIO Program’s Upward Bound.

The TRIO Caucus—a bicameral body of the U.S. Congress—includes members of the Massachusetts federal congressional delegation, among them Reps. Jim McGovern, Ed Markey, and Richard Neal. The caucus is a bipartisan group of members of Congress supportive of the federal TRIO programs and higher education access for low-income, first-generation students and students with disabilities. The Caucus seeks to generate support for TRIO programs from congressional offices, the U.S. Department of Education and other entities, and to expand awareness of the need for improving educational opportunities for all Americans. U.S. Senate Caucus Co-Chair Jon Tester (D-Montana) is leading the briefing.

In Marshall’s prepared remarks, she outlines the critical role TRIO’s Upward Bound and Talent Search Programs played for her success in high school as a rural Central Maine student. “While I started high school on the right note, I have no doubt that TRIO came into my life at a crucial moment,” stated Marshall. “Although my grades had improved radically in the 8th grade, I had no empirical proof that my grand plan for collegiate success was going to work out. It was not only going to take a really long time to see the results of my hard work, but there were also many potential pitfalls along the way. The services that I received from TRIO throughout high school were fundamental to my success for so many reasons. I had no role models in my family who encouraged me to do well in school and going to college was not part of the master narrative that was told in my family or in my rural Maine community. No one in my family had attended college and very few people, other than my teachers, had a postsecondary degree. TRIO advisors played this extremely important role in my life. They showed an interest in my success, provided the academic and personal coaching that kept me on the right path, and guided me through the college financial aid and application process. They served as role models, helped me to keep my eye on my goals, and steered me away from those potential pitfalls when necessary. The Upward Bound residential program that I attended at the University of Maine at Orono in 1988 and 1989 also showed me that my efforts were starting to lead to measurable success.”

TRIO Programs are among federal educational assistance program that are threatened by reductions in federal spending. For Marshall, and others who work with or have benefited from these programs, such reductions are a prospective rejection of highly successful and transformative college access programs that pay dividends almost immediately.

Marshall explained, “I am now a member of the middle class who brings a very unique perspective to higher education. I have two daughters who will never have to ask if they will go to college, but instead where they will attend. The cycle of poverty has been broken, and I am living proof that TRIO works. In my roles as a professor and as a college administrator, I have touched thousands of lives over the last 18 years, and I have dedicated my professional life to paying [the TRIO] investment forward.”

Marshall’s participation in the TRIO Caucus briefing was instigated by her TRIO advisor in Maine, David Megquier, director of the Maine Educational Opportunity Center and Maine Educational Talent Search programs at the University of Maine in Orono. At Megquier’s recommendation, the Council for Opportunity in Education—a Washington, D.C., nonprofit policy group dedicated to furthering expansion of educational opportunities throughout the United States—invited Marshall to be their witness at the Caucus event. In addition to Marshall, witnesses are also to present statements on behalf of the American Indian Higher Education Coalition and Excelencia in Education.

During her time in D.C. tomorrow, Dr. Marshall is scheduled to visit with her home state Maine Sen. Angus King (I) and Rep. Chellie Pingree (D-1), and to meet with the staffs of Sen. Susan Collins (R-Maine). Marshall is also expecting to meet with the education staff for Rep. McGovern; McGovern is the federal legislator representing Worcester State University.

Dr. Marshall earned her Ph.D. in Hispanic Studies from Brown University in 2001, following her B.A. in English and Spanish earned summa cum laude at Colby College in 1994. Marshall joined the faculty at Worcester State in 2004. She became the first chair of WSU’s World Languages Department in 2009. For the 2011-12 academic year, she was tapped to be a faculty fellow working in Academic Affairs on a “Year of Retention” project. During that period, she worked extensively on securing WSU’s first Vision Grant from the Department of Higher Education in support of the University’s focused efforts to better retain and graduate its students. This academic year, Marshall was tapped to be interim associate vice president of Academic Affairs.

Among her other teaching positions, Marshall has taught at Providence College, Brown University, Wesleyan University, and Clark University. Her collegiate years also included two extended periods of overseas study in Spain, with a year in Salamanca and a semester in Madrid. 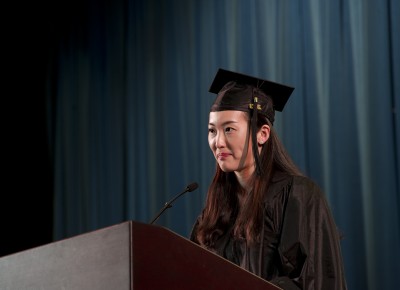 Worcester State University’s Graduate School held its 59th annual graduate commencement and hooding Monday, May 13 in the Sullivan Auditorium and awarded 204 graduate degrees and certificates of . . .