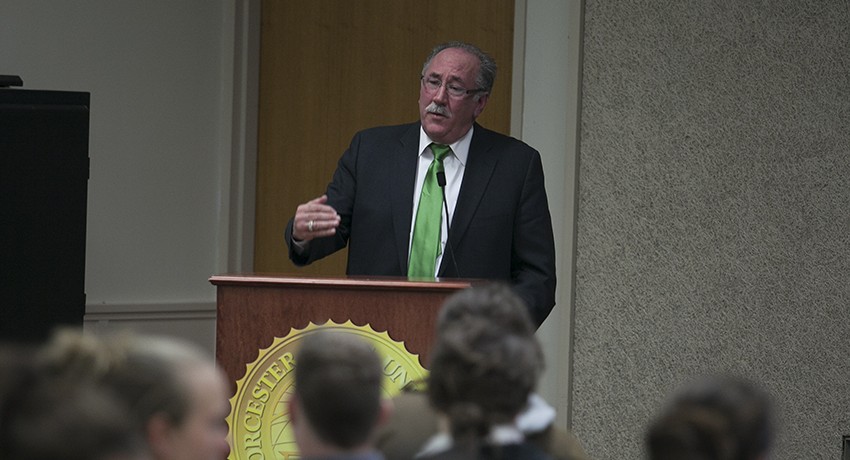 Three alumni returned to the Worcester State University campus on Thursday, March 14 to speak about their work to end homelessness in Worcester and statewide, particularly among 12- to 24-year-olds.

Kerr reported that homelessness in Worcester County spiked between 2011 and 2012 due to a decrease in federal stimulus money for homeless services and assistance for homeless families.

In 2012, CMHA assisted 530 homeless people without children, 1,021 homeless household with children and 29 unaccompanied, homeless youth. It also runs Elder Home Repairs, a program that helps the elderly afford to stay in their homes, which assisted 318 elder homeowners.

Ordinary life events can send a family or an individual into a spiral that leads to homelessness, according to Kerr. Therefore, CMHA is focused on prevention, shelter, sustainability and advocacy. “We really need change to come from the top down, and empower people and educate them to get out of homeless,” Kerr said.

It’s 28th Annual Walk for the Homeless will be held Sunday, May 19 at Elm Park. It will feature a 5K run as well as the walk. One hundred percent of the proceeds go to homeless service agencies in Worcester. This year a portion will benefit St. John’s Food for the Poor program. Last year, $124,000 was raised, and more than $2 million has been raised over the life of the event, Kerr said.

Veterans Inc. has been located on Grove Street for 23 years, and has grown to seven housing sites around New England with over 200 beds, Riik said. It focuses on a “triangle of needs” for every homeless veteran: medical attention, employment and training, and housing.

“Since we’ve been in business, we’ve helped over 50,000 veterans and their families,” she said.

In addition, Veterans Inc. helps the Veterans Administration help veterans by navigating the federal agencies bureaucratic process for clients, “to help them get what they deserve,” Riik said. It also runs a food pantry, which serves about 150 families a month.

Veterans Inc. is also the first veterans’ homeless shelter in the nation to serve female soldiers and their families.

“This is just the brink of what they’re dealing with,” Riik said. “Most, if not all, vets are coming back (from Afghanistan and Iraq) with Post Traumatic Stress Disorder, even if they don’t want to admit it.”

“Resources to support young people are present but aren’t coordinated,” she said. In some cases, a young person is dealt with separately from their families. Housing options for them are limited.

LUK has assisted 753 young people, but only 123 of them self-identified as homeless, Bergeron said. Meanwhile, 30 percent of homeless youth who sought help reported getting what they needed. It’s worse for youth on the streets—9 percent could access services or 19 percent reported they “couch surfed.”

O’Day spoke about his work to end homelessness, especially among unaccompanied youth, throughout Massachusetts.

“There are pockets, different segments, of people who are homeless,” he explained. There is an estimated 6,000 unaccompanied, homeless youth who are between 12 and 24 years old living in Massachusetts.

He filed a bill last year that established a commission to identify programs for this segment of the homeless population with best practices all across the state, including Worcester, and to recommend ones that can be implemented statewide. It began meeting in December and plans to release a white paper at the end of March.

“We don’t have enough youth on it,” O’Day said. “We need to have youth as part of the commission. That’s one piece we’re really working on. To make sure we have young folks who will come in and talk with us.”

He’s filed a subsequent bill this session to get some funding so that the commission can go to other areas of the commonwealth to find different methodologies and programs.

“It is clear that we do not have the luxury to not act as a commonwealth and a Legislature,” O’Day said. “It’s the old adage: Pay me now or pay me later.”

Before becoming a state legislator, O’Day spent over 24 years working in the Department of Children and Families. His first state representative race was in 2007.

The Urban Studies Department and the Intergenerational Urban Institute sponsored the panel discussion. 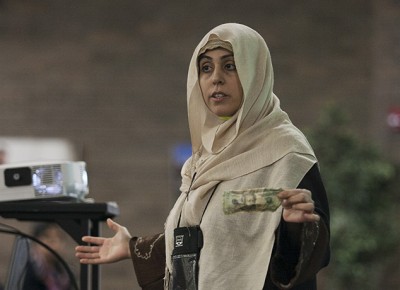 Dressed in a jilbab, author Zohra Sarwari told Worcester State University students on Wednesday, March 13 that, contrary to popular misconceptions, she isn’t forced by any man or her religion to . . .