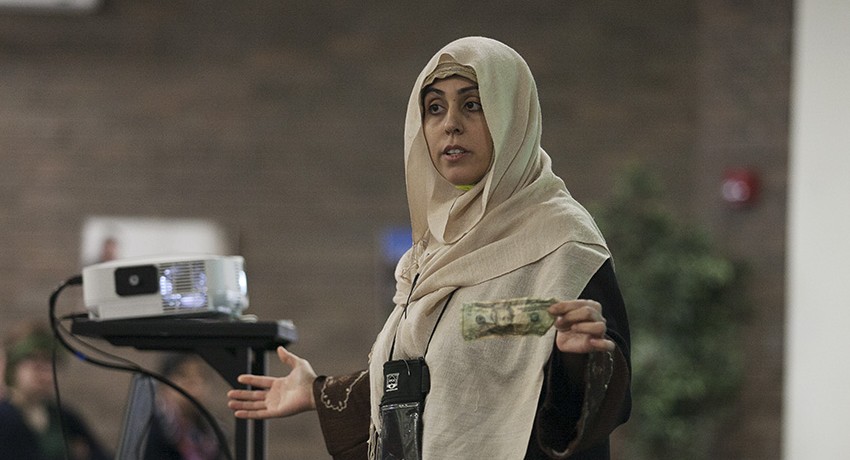 Dressed in a jilbab, author Zohra Sarwari told Worcester State University students on Wednesday, March 13 that, contrary to popular misconceptions, she isn’t forced by any man or her religion to wear her jilbabs.

“Why do women wear the jilbab? Tradition? Modesty?” she asked. “It’s because we just want to obey God.”

But in the post-9/11 era, such attire makes Muslim women targets of Islamophobic prejudice and, sometimes, racially motivated violence.

The story of Marwa el-Sherbini is one such case, Sarwari said. At a park in Germany with her son, el-Sherbini, wearing a headscarf, was verbally insulted by a man during a quarrel over time on a swing. “Islamist” and “terrorist” were among his many insults. It escalated to the point el-Sherbini called the police, only to be the one taken away in the police car.

“Marwa took the guy to court, but he refused to pay,” Sarwari said. At the third trial, Marwa, pregnant with her second child, sat defenseless as the man rushed forward to where she was testifying and stabbed her nearly 20 times. While running to try to save her, el-Sherbini’s husband was shot by an officer, who was attempting to shoot her assailant. The couple’s 3-year-old son witnessed everything. “Was that worth one headscarf on a human being?” she asked the hushed crowd gathered in the Blue Lounge. “Where is our civilization? Our humanity? What has come of us?”

Sarwari questioned the assumptions that all Muslims are terrorists and all terrorists are Muslims. She highlighted cases of Caucasian, Christian children and adults arrested, tried and convicted of extreme violence and violent plots.

Any religious text is open to narrow interpretation, Sarwar said. And she read verses of the Old Testament—a basis of Judaism and Christianity—to show how reading and memorizing only part of these works can mislead people.

“That verse is for that time and that time only, not for today,” she said. “You have to understand the context and what was happening to the Prophet at that time.”

The majority of Muslims, Sarwar added, have a broad understanding of the Quraan’s teachings.

Sarwari is a native of Afghanistan and immigrated to the United States at the age of 6. Her goal is to bridge the gap between the West and Muslims and teach her listeners what is true and untrue about Islam.

Her appearance at Worcester State University was part of the Diversity Lecture Series, which is sponsored by the Student Center/Student Activities Office, Athletics Office, Health and Wellness Office, Residence Life and Housing Office, and the Student Events Committee.