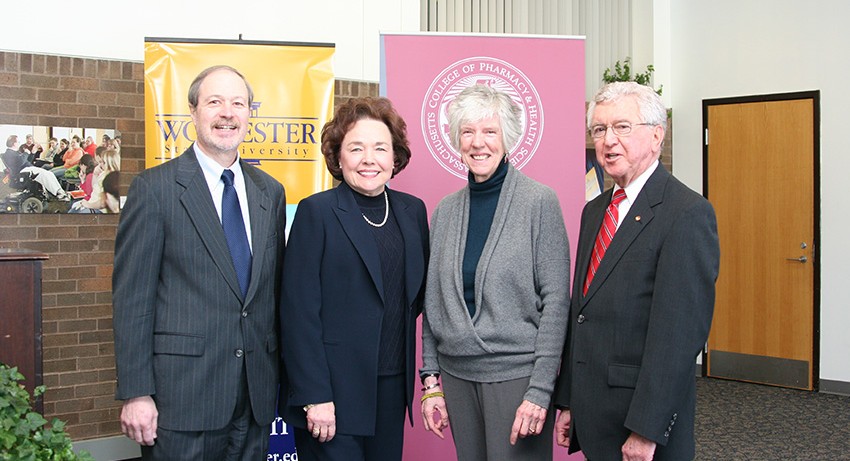 Over 100 dignitaries, students, faculty, and staff looked on as Worcester State University President Janelle Ashley and Massachusetts College of Pharmacy and Health Sciences President Charles F. Monahan, Jr. signed a joint transfer agreement on Monday, January 24. The joint agreement will allow WSU students to complete 80 credits of study toward a Bachelor of Science degree in public health pre-nursing offered by the Health Sciences Department and then transfer to MCPHS to complete the requirements of their accepted B.S. in Nursing degree. The dual-degree program can be completed in four years.

“Higher education turns out a well-trained and well educated workforce that creates innovation that is so important—particularly in allied health and health care,” he said.

Gladys Rodriguez-Parker spoke on behalf of Congressman James McGovern, who could not attend due to commitments in Washington, D.C. “This marriage could not have happened in a better way. This partnership is in really great hands,” she said.

State Senator Harriette Chandler, who is the new vice chair of the Public Health Committee, called the agreement “the best of the best. It is not only a great public-private partnership, but a wonderful example of entrepreneurship.”

State Senator Michael Moore, new chair of the Joint Committee on Higher Education remarked, “If you look at our troubled times, our economy depends on our students receiving the proper education so our economy can thrive.”

State Representative John Mahoney recalled growing up in Worcester when manufacturing was the base of the economy. “This will take us through the next 50 years and beyond,” he said.

Department of Higher Education Associate Commissioner of Academic Policy Dr. Francesca Purcell, who has been working with transfer agreements for seven years, said, “This agreement is a model we will use going forward.”

Monahan praised the agreement, which will allow students to complete two degrees in just four years. “We are proud of our graduates, who are leaders in health care regionally and nationally,” he said.

“As a Worcester native, I am proud to say that Central Massachusetts is home to some of the state’s premier hospitals and health care institutions – one of the major reasons an innovative public-private partnership like this is possible,” Monahan said. “The health-care field is evolving faster than ever, and we are proud to offer such a unique pathway to the nursing profession.”

In addition, Monahan praised President Ashley, who will be retiring this June, for her leadership and remarked on the record of success at WSU during her tenure as president. “Worcester State has been named ‘Best in the Northeast’ by The Princeton Review for seven years in a row and it is the only Massachusetts State University with this distinction. Many campus improvements have been completed during her tenure on time and on budget: the historic Helen G. Shaughnessy Administration Building, Wasylean Residence Hall, Dowden Residence Hall, Learning Resource Center, and parking garage.”

WSU Board of Trustees Chair John Brissette applauded the announcement and praised President Monahan for his skillful and dynamic leadership.  “He greatly expanded the MCPHS Boston campus, opened a campus in Manchester, New Hampshire—and we are delighted he is our neighbor in Worcester.  He has contributed greatly to the vitality of our city and region,” he said.

“I commend both institutions for crafting this outstanding public-private partnership,” he added. “In these challenging economic times, it’s innovative thinking and collaboration like this that will make a world of difference for our students.”

The Women In Business (BA/WO 482) class met on Wednesday afternoons this semester and were privileged to be introduced to many women who had rich and varied careers. For the final session, Stephanie . . .