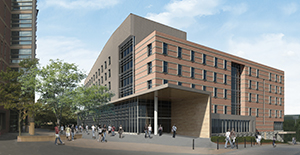 Worcester State University celebrated the formal groundbreaking of its new 400-bed residence and dining hall on Thursday, March 21 at 3 p.m.

With the groundbreaking ceremony, university officials announced the name of the new residence hall.  To be named for Lt. Col. James F. Sheehan, USMC (ret.), the hall will honor the 1955 Worcester State Teachers College graduate.

In a letter to President Maloney, Massachusetts Higher Education Commissioner Dr. Richard M. Freeland offered his congratulations and stated that Col. Sheehan’s support “is a truly magnificent achievement for Worcester State and . . . as a testament to his loyalty and gratitude toward the college.”

The new building—scheduled to be ready for occupancy at the beginning of the fall 2014 semester—will add approximately 10 percent to the University’s on-campus housing capacity.  It will also contain a new state-of-the-art dining facility capable of seating 575 students, faculty and staff.  The ceremony will take place on the Wasylean Hall Plaza, adjacent of the construction site.

Sheehan Hall will bring to four the number of residential complexes on the WSU campus, joining Wasylean and Dowden Halls, and the Chandler Village.  Positioned on the hillside above the Coughlin Athletic Field, the new residential facility will serve as a clear anchor to the residential area of the campus, offering a panoramic view of the university grounds and create a pedestrian core integrating all of the residential buildings.

“With this new residence hall, we will be able to foster a new living-learning environment for all of our campus residents,” stated Dr. Sibyl M. Brownlee, WSU Vice President for Student Affairs, who will emcee the ceremony.

The Sheehan Hall building project has a budget of $60 million, the bulk of which is financed through the Massachusetts State College Building Authority (MSCBA).  MSCBA finances, designs, constructs and oversees the management of revenue-funded projects—housing, dining, athletic, parking and other student activity facilities—to support the academic mission of the nine Massachusetts state universities.  The Authority receives no appropriation from the Commonwealth.  All revenues to support facility design, construction and operation are derived from the rents and fees paid by students for the use of these facilities and services.

In addition to the financing through MSCBA, funding support for the building has been raised by the University.

WSU President Maloney noted that the new residential facility will significantly enhance the student life experience of the campus.

“It will provide a quality collegiate housing option for our undergraduate students and permit us to launch a guaranteed housing option for our student body,” stated Maloney.  “When Sheehan Hall is completed in August 2014, two out of every five of our students will be housed here on campus—and we know that residential students will both add vitality to our campus community and positively affect our retention and completion rates.”

WSU has been actively pursuing efforts to raise its six-year graduation rate and recently released data that it has successfully improved that rate by nearly 6 percent to 51 percent over a two-year period.

“I am a firm believer in the idea that most of the learning in college is done outside of the classroom,” Sansoucy said. “The residence halls are not only where friendships are born, but it is also where students are exposed to new ideas and diversity that they have never seen before. With the addition of the Lieutenant Colonel James Sheehan Hall to the Worcester State University campus, more students each year will be able to enjoy the personal growth and excitement that comes from the on-campus lifestyle of a university. The growth of our residence halls is something that has been highly anticipated by our student body for quite some time.” 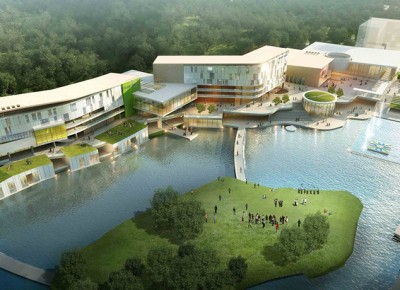