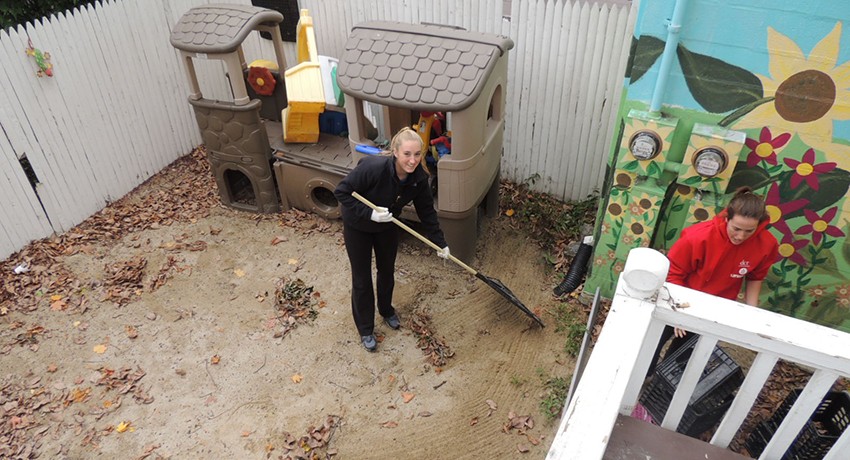 Twenty members of the Worcester State University field hockey team, along with Coach Chris Pothier and Assistant Coach Kelly Downs, participated in what has become an annual event, Fall Cleanup at Friendly House, a shelter on Elm Street in downtown Worcester, on Friday, November 2.

According to Coach Pothier, the activity combined fun and learning. “Many of the players have never done yard work before, so it was a humbling experience and a fun learning curve,” she said. “It was great to see the girls organize themselves into different roles and attack the yard with fury. A couple people who live at the house came out to thank the girls and were very impressed with their results!”

Friendly House first opened its doors in 1920 as a small, three-room settlement house located at 37 Norfolk Street in Worcester under the sponsorship of the Worcester Civic League. Their mission was to promote neighborhood health and welfare for the betterment of Worcester and to further the interests of Worcester’s immigrants – introducing them to customs and traditions of their new home and helping them to become an integral part of civic life. Focusing in particular on homeless families, Friendly House plays a vital role in the health and well being of women and children.

Not really knowing much about the house and its function in the community, the field hockey student-athletes learned first-hand from the house manager, Evelyn Vega, who was kind enough to chat for 10 minutes and field any questions the team had. Ms. Vega spoke about who qualifies to live in the house, how many families live in the house, and the challenges of everyday life for many.

“You could tell this struck a chord with the team as they were glued to every word that Evelyn spoke, and it then hit them what kind of impact our service for the house will have on the Friendly House community,” Coach Pothier said.

After the afternoon was over, the student-athletes wanted more experiences similar to this one and they want to make even more of an impact the next time around. Coach Pothier thanks everyone for allowing WSU Field Hockey to give back to the community and they are very excited for next year. 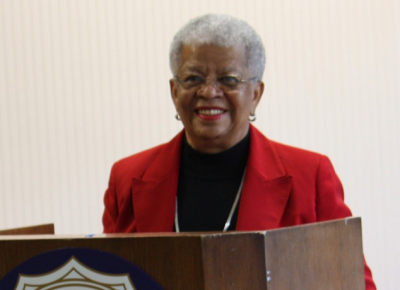 I’ve never been to an open-mic poetry reading. Suffice to say, the winners of the annual Dr. A. Barbara Pilon Poetry Contest deserved the honor. “Here goes nothing.” That’s what many of . . .