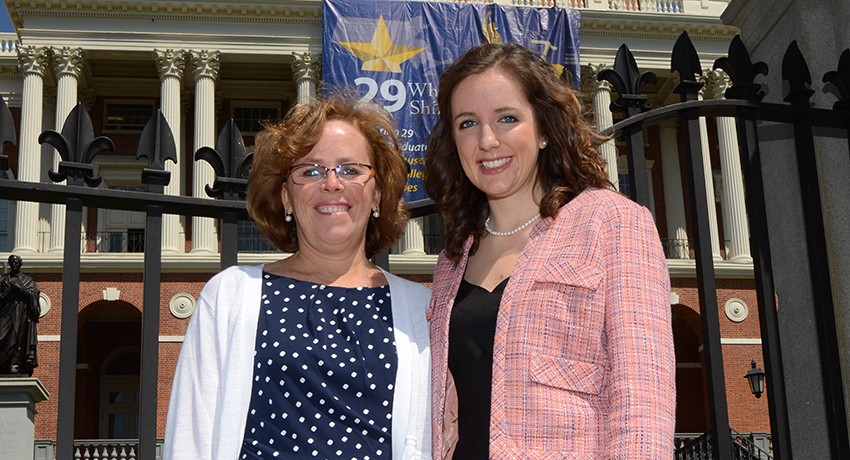 Amber Nicole Connors, a 2013 double major in Communication Sciences and Disorders and Spanish, is the 2013 Massachusetts Department of Higher Education 29 Who Shine awardee from Worcester State University. A native of Westfield, Amber was selected from a pool of high achieving academic students who demonstrated civic engagement and strong leadership qualities.

“Amber is an exemplary choice to represent Worcester State for this year’s 29 Who Shine recognition,” stated WSU President Barry M. Maloney. “She has tackled her academic work with vigor, double majoring, while actively engaging in our campus community in a manner that demonstrates her leadership skills and a commitment to our institution. I’m happy to further note that she was not content to learn only from here—she also studied abroad in Spain at the Universidad de Seville. Amber is truly changing the way the world works.”

As one of Worcester State’s most active and passionate student leaders, Amber served as a Senior Peer Advisor in the Academic Success Center and held multiple positions in the Student Affairs Office including Resident Assistant, Student Activities programming Assistant and Orientation Co-Director. She also worked tirelessly each year on WSU’s Student Government Association Auction for the Homeless, which raises over $30,000 for Worcester area non-profit agencies.

Amber managed campus activities while maintaining a 3.869 GPA and making Dean’s List all four years. She is a member of the Omicron Delta Kappa Honor Society and appears in Who’s Who Among Students in American Colleges and Universities. Amber will pursue a master’s degree in psychology. She hopes to earn a doctorate and become a college dean of student affairs.

“Each one of these 29 Who Shine students has a remarkable story to tell,” said Governor Deval Patrick. “Collectively, they remind us that investing in them is investing in our future.”

“Amber’s story embodies the importance of having access to high-quality, affordable public higher education,” he said. “I am pleased to honor her and her efforts with the 29 Who Shine Award.”

The 29 Who Shine Awards recognizes 29 public college and university students for their academic achievements and civic contributions to the Commonwealth. The students, one from each of the state’s 29 community college, state university and UMass campuses, will be honored by Governor Patrick in a State House ceremony scheduled for Thursday, May 2 at 12 noon. Amber will be joined at the State House event with the Governor by her parents, her grandmother, Ms. Murphy, and President Maloney.

Each of Massachusetts’ 29 public college and university campuses selected its own student honoree for the 29 Who Shine Awards based on criteria established by the Massachusetts Department of Higher Education. Students must demonstrate a strong academic record and have made a contribution to the civic well-being of the Commonwealth. They are required to be Massachusetts residents who intended to remain in state upon graduation.

This is the third year of the 29 Who Shine recognition program, started under the leadership of Higher Education Commissioner Richard M. Freeland.