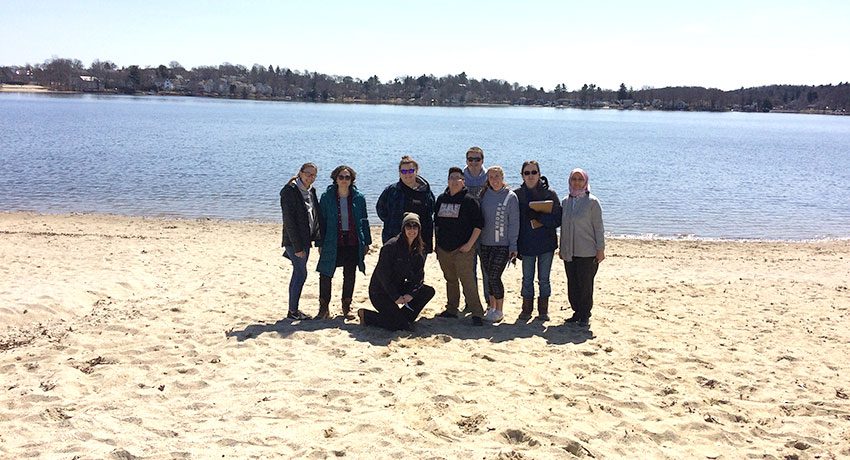 Blue is the new green, at least according to three Worcester State University students who gave presentations at a statewide conference recently. The students were involved with coursework that studied ways to protect the City of Worcester’s environmentally sensitive “blue spaces,” the more than 20 lakes and ponds that make up the city’s watery areas, and the rivers and streams that feed them.

The students presented their work at the 5th Annual Conference on Civic Learning and Engagement presented by the Massachusetts Department of Higher Education. The conference, which was held at Fitchburg State University, was attended by educators from throughout Massachusetts looking to get students involved with their communities.

Mark Wagner, director of the John J. Binienda Center for Civic Engagement at Worcester State, was one of the conference organizers and served as a moderator. Other participants included Assistant Professor of English Jamie Remillard, who taught the students in the course “Science Writing for Civic Engagement,” and Jacqueline Burmeister, senior environmental analyst for Worcester’s Department of Public Works & Parks, who has been charged with improving oversight of the city’s blue spaces.

Erika Akerson ’20 and Pierre Farah Aubin ’19 worked on a map of Worcester’s blue spaces and developed a presentation about the importance of caring for them. A goal was to show younger students how they can get involved as citizen scientists in programs such as one in Worcester where volunteers help monitor water quality of local ponds and lakes. They gave the presentation at South High Community School in Worcester and at Worcester State’s Congratulations Day, which is a day of special programming for students who have been newly accepted by the university.

“We tried to educate them on what involvement would look like on the Citizen Science program that Jackie (Burmeister) wants to get local people involved with to sample the water for bacteria and things like that,” Akerson said. “That’s really important for the health of the water in the lakes.”

Many of Burmeister’s volunteers are retirees and older people, Akerson said.  She hopes that, through presentations such as the one she and Aubin worked on, more young people will become engaged in community projects as well. “We just went through with a map and other slides and talked about what is civic engagement, what is citizen science, what does your community look like with all these lakes and why is it important,” she said.

Why is it important?

“Because for people to feel like they’re part of a community they need to take responsibility for their environment,” Akerson said. “And a big part why this project it’s important to me is I think the natural world and the urban world really need to be connected and this was a really good opportunity for that.”

An important aspect of the project for Aubin was interacting with the community, especially being a role model for high school students. “I loved meeting the kids,” she said. “I loved hearing their interest. I loved seeing their hands go up,” she said. They asked “Oh, I could be part of this?” Her answer to them: “Yes, you can. Science is not a monster. Science is you. Science is me. Science is everybody else. But we’ve got to get involved with it in order to understand it.”

Hannah Dixon ’20 was part of a team of students who researched information for a flyer aimed at teaching people who fish in Worcester’s lakes and ponds how to make safer, more ecologically sound choices.

She Googled “fishing safety,” but “All that came up were things like where to stand so you don’t fall out of the back of the boat and how not to hook yourself in the back,” Dixson said during her presentation at Fitchburg. She had to fish deeper for the answers she needed. Among information imparted by the flyer is the need to rinse off your boat before going from one body of water to the next to eliminate any toxic residues or seeds of invasive weeds, which are a big problem in Worcester’s waterways.

The students’ involvement with the city’s blue space program came about after Wagner connected Remillard with Burmeister last fall while Remillard was developing topics for the spring semester “Science Writing for Civic Engagement” course.

“Public engagement was the key and I saw working with Jackie, seeing what she already does to advance public engagement, seeing what she already does to engage people with the science around monitoring natural resources within the city, that seemed like both a great model for what I wanted my students to be able to do and also a wonderful opportunity for them to contribute somehow,” Remillard said.

Burmeister said she was impressed with the students in Remillard’s class, including the three who gave presentations at the conference, for their contributions, enthusiasm and willingness to learn.

“It’s been a real pleasure to work with the class,” she said. “They were really interested and involved in learning about all of the different challenges going on at Worcester’s lakes and ponds, identifying opportunities where the public could be more involved and really helping me to create materials that are going to reach a wider audience. It was a great opportunity to work with such energetic students and I really hope this class is taught again so we can continue to collaborate.” 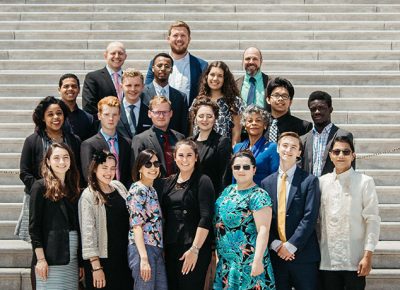 Up to Us: Students Raise Awareness of National Debt

While some students are aware of their own debt, Worcester State students are helping to call attention to something much bigger and more impactful--the national debt.  Sophia Palmacci ‘20 is the leader of a campus chapter of the Up to Us project, a nationwide program that raises awareness about fiscal policy. Teams at higher-education institutions encourage students to learn about the debt . . .