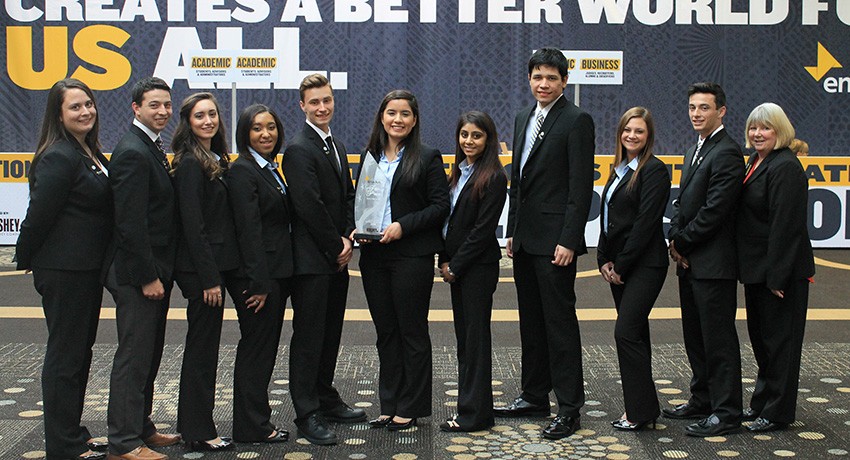 The Worcester State University Enactus team placed in the top 20 (out of 535 across the U.S.) at the Enactus 2016 National Exposition held in St. Louis, Mo. After winning the regional competition in Washington, D.C. this past March, the team qualified to compete with 120 other regional champions in the National Quarter Finals on May 16.

The team also was one of three teams to earn a $3,500 topic competition from the American International Group, which will allow Enactus to partner with Café Reyes/Reyes House in fall 2016 to deliver health and wellness modules. Additionally, two members were awarded national academic scholarships ranging from $5,000 to $7,500 through their participation in Enactus. Raphael Nunez received the Enactus Emerging Leader Award, which provides a $5,000 scholarship and an internship at the Grocer Manufacturers Association in Washington, D.C., and Monica Bhakhri received a $7,500 scholarship from the Jules & Gwen Knapp Enactus Ambassador Scholarship Award.

Several members have been offered internships and job opportunities throughout the year, thanks to Enactus’ network of more than 100 business partners, including numerous Fortune and Global 500 companies such as Unilever, Fidelity, KPMG, Microsoft, Coca-Cola, PepsiCo, Sam’s Club, Walmart, and Synchrony Financial. A list of the partner companies can be found here.

“Our accomplishments this year are testaments to the impact that our team has on the community,” Bhakhri ’18 said. “As college students aspiring to make an impact on our world, we are grateful to have the support of the University. We look forward to working in the upcoming year to impact even more people in the community and to represent Worcester State University as a leader in community development.”

Over the past year, Enactus has worked with the Latin American Health Alliance on two main projects: Access to Healthcare and Café Reyes. With the help of funding from the Fairlawn Foundation Fund at Greater Worcester Community Foundation and the Health Foundation of Central Massachusetts, Enactus created an updated, comprehensive, and accurate 54-page database of health-care resources to alleviate the lack of reliable information regarding health-care options for those with limited resources.

Café Reyes, which is part of LAHA’s social entrepreneurship venture Reyes House, provides Latino males recovering from drug addiction with marketable job skills, hands-on training, and work experience for re-entry into society. The Café sought to increase awareness for its mission and to broaden its customer base, so the Enactus team planned a series of themed fundraisers at Café Reyes, including a trivia night, paint night, and Cuban night. The fundraisers brought in more than 120 people, 78 percent of whom were first-time patrons.

Enactus also worked with Worcester State’s Latino Education Institute to improve financial literacy among Worcester’s Latino immigrant population, many of whom live below the poverty level. The team worked with the adult learners on modules ranging from budgeting to credit cards, and arranged for a community bank representative to facilitate a move into the formal banking system. 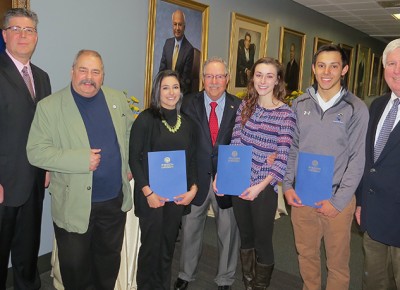 The Next Big Idea May Keep Real Estate Agents Safer

An app to keep Realtors safer at open houses while at the same time efficiently organizing contact information won the top prize at the 2016 Robert K. O’Brien ’58 Next Big Idea contest on . . .