On Friday, October 3, several members of the women’s basketball and field hockey team participated in a community reading day at the Tatnuck Magnet School.

The event held was a kick-off to the “20 Minutes, Every Child, Every Day” campaign, which is a part of a larger city of Worcester literacy campaign started last year called “Worcester, The City That Reads.”

The idea for a large-scale reading program to spread the message to approximately 23,000 elementary school students in the city came about at a round-table meeting in May with various members of the local academic community.

“The message is simple,” said Erin Dobson, principal of the Tatnuck Magnet School. “(We’re) trying to spread the word across the city that the most important part of your day is to read with your children, because kids who read succeed.”

The initial connection between the student-athletes was made by Mark Wagner, the director of the John J. Binienda Center for Civic Engagement, who pitched the idea to Baker and Pini, who are involved with the Student-Athlete Advisory Committee (SAAC). The pair then worked together and got a few of their teammates interested in taking a short walk down to the Tatnuck Magnet school to help out with the literacy project.

Wagner also contacted Women’s Basketball Head Coach Karen Tessmer and she asked a few of her players if they were interested in spending time with kids in the classroom too.

”The ‘20 Minutes’ initiative is a good idea,” said Pini, who is double majoring in elementary education and math. “It helps spread the word about the teachers who are using it, so hopefully the parents start doing it too.”

Pini said that she was proud that the student-athletes present be a part of a group that included city councilors, policemen, and other members of the local community.

“It helped give the message that these adults like to read, so we should like reading too,” said Pini.

Pini originally thought that she and Sunderland were going to be reading to a group of second-graders, but were extremely surprised when they walked into a room full of sixth-graders and were handed a chapter book to read aloud.

“We walked in and at first it was a little chaotic, we really didn’t know what to expect,” said Pini. “Once we started reading the first chapter of ‘The Hobbit’ they were really intrigued and attentive.”

“Along with Shelby and Nani, we read ‘Stellaluna’ to the class with everyone taking turns reading six to seven pages at a time and it was a great experience,” said Gonzalez, who is also double-majoring in Spanish and secondary education. “It was extremely helpful to see what the classroom looked like because this is the major that I want to pursue in graduate school.”

Dobson said that the “20 Minutes” program was a win-win-win for the local public schools, businesses, and colleges. “The reading campaign, while focusing on the ages zero to five and school-age kids, will pay dividends for the economic development of the city,” she said. “If we can educate our students, colleges will reap the benefits because more will pursue education opportunities.”

Not only was there signage around the school and outside of the school, but Dobson mentioned that with each specific bus route, the school and city buses have also contained the “20 Minutes” message.

“The relentlessness of the message is what our group is looking for, so people are constantly reminded that you should read with your children. Hopefully the message will turn into habits and habits of excellence are formed in the homes across the city of Worcester,” she said. 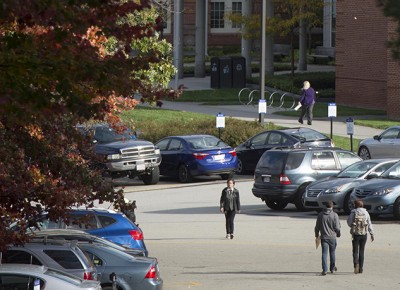 With 4,800-plus commuter students, our commuter programs help students connect to campus. And this year, our offerings got even better with the launch of the new Commuter Assistant Program that pairs . . .