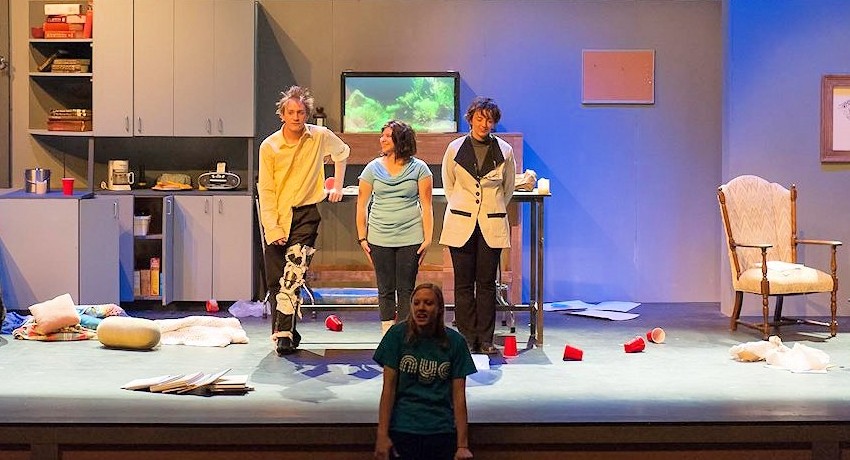 Christine Begin, a visual and performing arts major, took on the project of directing “Boom” by Peter Sinn Nachtried as her senior capstone project. The results and review won’t be in until her capstone team meets, but the word on the street indicates the play proved an unqualified success.

In “Boom,” a journalism student at a university answers an ad that promises “sex to change the course of the world,” and finds herself in the underground lab of a grad student who is predicting the end of the world. As a docent from the future controls the scene, we see the fate of the human race played out between two offbeat characters. The Worcester State Theatre performances were held February 21, 22, 23 and 24 in the Fuller Theater, located on the second floor of the Helen G. Shaughnessy Administration Building.

“We heard the KCACTF person talk about how all the design elements came together to make a cohesive and unified show,” said Robert Dookhran, a VPA major, and lighting and sound director for the show. A unified show allows the audience to follow the text of the play more easily.

The Kennedy Center American College Theater Festival sends a reviewer to each theater production to choose staffing and actors for participation in the local and national festival. The goal of the program is to promote quality in college-level theater productions. At each festival, students attend workshops and more to gain a deeper understanding of theater production. Worcester State University’s VPA Department recently sent several students to the festival on Cape Cod.

While the play itself proved entertaining, the process of producing the play is at the core of learning for visual and performing arts students.

Begin held her directorial debut, pulling together not only the performance of the actors, but also that of sound, lighting, staging, and costumes –all of which were completed by students in the VPA program.

“As lighting and sound director, I learned to become two people,” said Dookhran. “I was also in good communication with the set and prop designers to pull it all together.  We all worked together to get the effect the director wanted, and she communicated well, which made our job easier.”

“This three person show used lighting, sound, and staging along with visionary directing to transport the audience into a future world of passion and compassion to explore what it really means to be alive,” said Charles Fox, dean of the School of Humanities and Social Sciences. “During a professional evaluation with cast and crew, the ‘respondent’ (a theater professional from KCACTF) had strongly positive comments and stated she fully enjoyed the show. “

It’s this positive reaction that led the cast and crew to its final curtain call on February 24. “The curtain call is my favorite part,” said Dookhran.  “We worked hard. And hearing the applause and the gratitude of the audience always gets to me.”

Mendoza to Present and Participate in Human Rights Workshop

José Jorge Mendoza (Philosophy) has been invited to present and participate in The Oxford Program on Ethics, Law, and Armed Conflict, with Merton College Global Directions workshop on “Human . . .