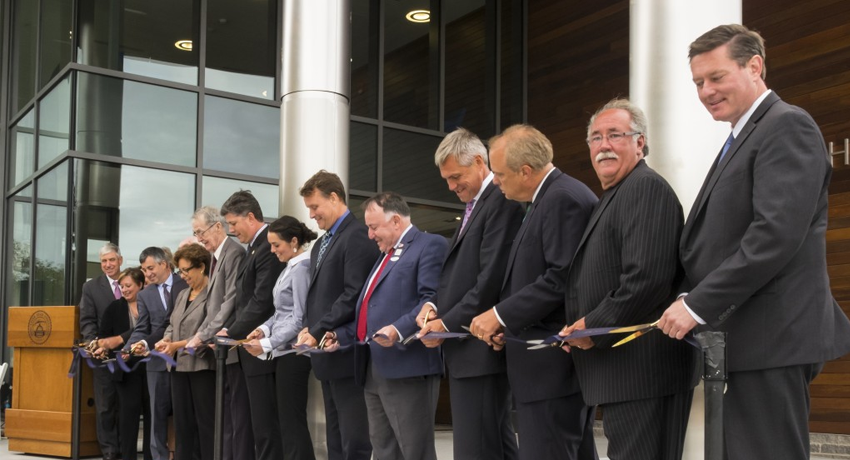 About 150 Worcester State University students, officials and community members celebrated the official opening of the campus’s 150,000 square-foot Sheehan Hall, which houses 400 students and features a new fresh-food “Pulse on Dining” restaurant-style dining hall that seats 650, at a ribbon-cutting ceremony on September 9.

The $60 million facility, the university’s fourth residence hall, brings the campus’s residential population to nearly 40 percent, up from about 19 percent in 2000, completing the shift from a mostly commuter college to a University with a significant percentage of undergraduates living on campus.

“As a signature building dramatically overlooking Coughlin Field, Sheehan Hall will help the university – and our students – reach new heights,” said Worcester State University President Barry M. Maloney. “We are investing in facilities that connect students to campus in order to help them succeed. In Sheehan Hall, students can eat, learn and live well. In turn, we expect more graduates to fill the Commonwealth’s growing need for a well-educated workforce.”

The Massachusetts State College Building Authority (MSCBA), an independent state entity, financed most of the construction of Sheehan Hall. This debt is supported solely by student room rent and fees, not by public funds or state appropriations.

Edward H. Adelman, MSCBA’s Executive Director, said, “We are thrilled to continue our partnership with Worcester State to provide high-quality, cost-effective facilities to support their excellent academic programs. On-campus housing improves student recruitment, retention, and persistence. Most of these students reside in the Commonwealth and represent the future of our educated workforce. This is great work and we are proud to be part of it.”

Chartwells, a leader in food service management for colleges and universities, is Worcester State’s dining services company and was a key partner in the financing and development of the facility. The new dining hall offers restaurant quality meals – with six culinary destinations – for the University’s 5,500 undergraduate and 900 graduate students. It is also open to faculty, staff and the community.

“The Chartwells culinary vision in our Pulse on Dining facilities creates a restaurant-quality experience for each guest every day,” said Greg Coady, executive vice president for Chartwells Higher Education.   “This intense focus drives student satisfaction.  In one of our platforms, our “My Kitchen,” the goal is to open the kitchen with a glass wall so that the culinary production area is in clear view.  Our guests can see their food being produced, cooked, presented and ultimately served.  In addition, our overarching goal is to provide the ability for each culinary venue to have a customized menu offering. Coady added that it had been rewarding to work with the university on this project. “It has been awesome seeing President Maloney’s vision come to fruition,” he said.

Melissa Edberg, president of the Worcester State University Student Government Association, said that the dining hall “offers a comfortable, aesthetically pleasing atmosphere for students to eat with their friends and enjoy a panoramic view of their campus.” Regarding the building itself, she said it “will be a great selling point for potential new students, which will only increase the number of applicants to our University.”

Ronald R. Valerio, class of ’75 and chair of the WSU Board of Trustees called the new facility another sign of a renaissance at the university. “This residence hall is the finest I have seen anywhere,” he said, while Senator Harriette Chandler of Worcester noted that the facility could “hold a candle at any school, anywhere.”

Designed by Goody Clancy, an award-winning Boston-based architectural firm, the building is situated atop a hill overlooking WSU’s Coughlin Athletic Field. The firm has designed signature facilities for many higher education institutions, including MIT, Dartmouth College and the University of Michigan. In addition to the student rooms and dining facility, the new building holds office space for some Student Affairs Division staff and for University Health Services.

Several speakers thanked Lt. Col. James F. Sheehan, USMC (ret.), class of 1955, for whom the building was named. Sen. Michael O. Moore, of the 2nd Worcester District and Senate Chair of the Higher Education Committee, pointed out that while the Commonwealth has been increasing funding for public higher education, “we can’t do it alone.” He said that higher education needs support from benefactors such as Lt. Col. Sheehan, who attended the event, and has provided a lifetime total of more than $4 million dollars for scholarships and for honors college and study abroad support.

Sean Nelson, Deputy Commissioner of the Department of Higher Education, said, “When you keep students on campus, graduation rates improve,” pointing out that numerous studies show a correlation.

Consigli Construction Co., Inc., of Milford, Mass., served as general contractor for construction. About 800 jobs were supported over the life of the 22-month construction: approximately 300 direct construction, and an additional 500 construction-related jobs.

Sheehan Hall is the latest completed project in a ten-year, $200 million building and renovation plan. A groundbreaking ceremony will be held soon for a new $45.5 million Wellness Center, scheduled to open in 2016. 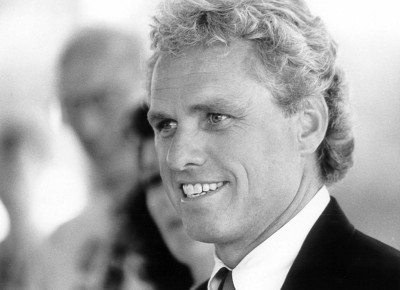